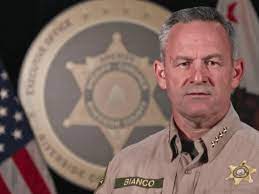 Riverside Sheriff Chad Bianco has been hit with a new controversy. Bianco had already courted controversy for refusing to vaccinate his staff members and inmates at the county jail, but now he has been accused of being a member of an anti-government militia.

According to posts on Twitter, Bianco is a member of the Oath Keepers.

Bianco’s name turned up in data hacked from the Oath Keeper’s website. The data was leaked to the media by Distributed Denial of Secrets, a whistleblower group.

Bianco confirmed the news in an interview with USA Today. He said he paid for a membership in 2014. About 200 other active law enforcement officers were members of the group.

The Oath Keepers is made up of former and current military members, police and emergency services workers. Their motto is to defend the Constitution and protect against foreign and domestic enemies, but they have recently taken to anti-government causes. The group has also shown up at protests such as Black Lives Matter events and supported Nevada rancher Cliven Bundy’s protest against the government.

The group was formed in 2009, in response to the rise of President Barack Obama, by Stewart Rhodes, a former paratrooper and Yale Law School graduate.

Rhodes has been known to push conspiracy theories.  For example, Rhodes believes in “the Big Lie,” that President Donald Trump was cheated out of the presidency. He also believes that the Chinese are controlling President Joe Biden.

“Well, I think what we have to realize is that, you know, Trump actually failed. … He had a duty and responsibility to step up. But he failed to do that and he allowed a ChiCom (Chinese Communist) puppet into the White House and I think we now need to just declare that to be illegitimate and refuse to comply with anything that comes out of his mouth, anything he signs, anything passed as so-called legislation. Label it ‘pretend legislation’ like the Founding Fathers did,” said Rhodes, in an interview with Alex Jones’ conspiracy show “InfoWars.”

After Trump’s November 2020 election loss, Rhodes urged Trump to invoke the Insurrection Act and use the military to stay in power.

According to the Southern Poverty Law Center, several Oath Keepers have been arrested on charges including child rape, weapon violations and making terroristic threats.

Ironically although the group is involved with anti-government activities, several members are law enforcement personnel. At least 16 Oath Keepers have been indicted for their involvement in the Jan. 6 attack on the Capitol.

According to the Southern Poverty Law Center, there is a contradiction in the Oath Keeper’s message. They are a group made up of law enforcement officers that are frequently involved in illegal activity.

“In his book, ‘Oath Keepers: Patriotism and the Edge of Violence in a Right-Wing Antigovernment Group,’ Sam Jackson says this creates in an inherent contradiction for the group – the police and military organizations from which their members come are some of the same organizations the group likely would have to attack in order to carry out its self-proclaimed mission against the government. Jackson, an expert on far-right extremism, is a professor in the College of Emergency Preparedness, Homeland Security and Cybersecurity at the University of Albany in New York,” said the site.