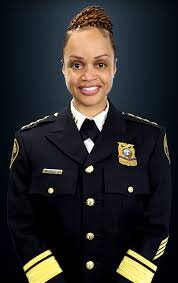 Philadelphia, PA — Danielle Outlaw is the first Black woman ever to become Philadelphia’s police commissioner. Her recent appointment came just a few months after the department started dealing with several controversies including the involvement of its former commissioner in sexual harassment scandals.

Outlaw, who is from Oakland, previously served as chief of police in Portland, Oregon since 2017. Outlaw began her law enforcement career with the Oakland Police Department in California. Since she worked in there, she rose her ranks through to Deputy Chief, she worked in various assignments throughout the Oakland Police Department, including Patrol, Community Services, the Office of Chief of Police, the Criminal Investigation Division, Internal Affairs, and the Office of Inspector General. During her time in Oakland, Outlaw thought the police should change their communication styles. She suggested that women’s soft skills could help in communicating with other communities and avoid potentially dangerous situations.

In 2017, when Mayor Ted Wheeler announced Outlaw would be replacing interim chief Mike Marshman, Outlaw said that she has been trying to change the perception of policing nationwide. Outlaw began serving as chief of police for the Portland Police Bureau in 2017.

One of the biggest changes for Outlaw that has come with her new position was the move from Oakland to Portland. Outlaw is one of five Portland chiefs hired from outside of the PPB in the last twenty years. Before moving to Portland Outlaw had a long history in the city of Oakland. Not only was she born and raised in Oakland, but she also joined the Alpha Kappa Alpha sorority two years before her move to Portland. The sisterhood, which was created to join African-American women together, helped her build a community in Oakland. One significant ally that Outlaw has found is Portland Trailblazer and fellow Oakland native Damian Lillard. Lillard was quick to extend a welcome to the new chief by inviting her to parties and showing support for Outlaw via social media posts.

When Outlaw was hired as chief of police for the Portland Police Bureau, she became the first African American woman to hold this position.  Before her, there had been two other female chiefs in Portland: Penny Harrington and Rosie Sizer.

When Outlaw joined the Portland force in 2017, the city’s Office of Equity released data stating that a quarter of PPB officers were women, and a quarter of officers identified as people of color. In the short time that she has been in Portland, she has stated that she hopes to improve this statistic and make a difference within the bureau. Outlaw says that she has a “…hope to support both demographic diversity and ‘diversity of thought’ in the bureau.”

In August, former commissioner Richard Ross, who is also Black, was forced to resign when a lawsuit surfaced accusing him of ignoring sexual harassment claims of an officer against a fellow officer. He was with the department in the last 30 years and was the commissioner since January 2016.

Aside from the several cases of gender and racial discrimination and harassment in the department, the crime rate and poverty level also continued to increase, pushing the authorities to appoint a new police commissioner in hopes to curb it.

“I am very qualified to make the jump,” Outlaw said in her introductory press conference. “The issues remain the same. I am very experienced in each of them.”

Outlaw was chosen from 31 candidates, 18 of which were from the Philadelphia force. When Mayor Jim Kenney announced her appointment, many have been glad that the city chose a woman of color for the job.