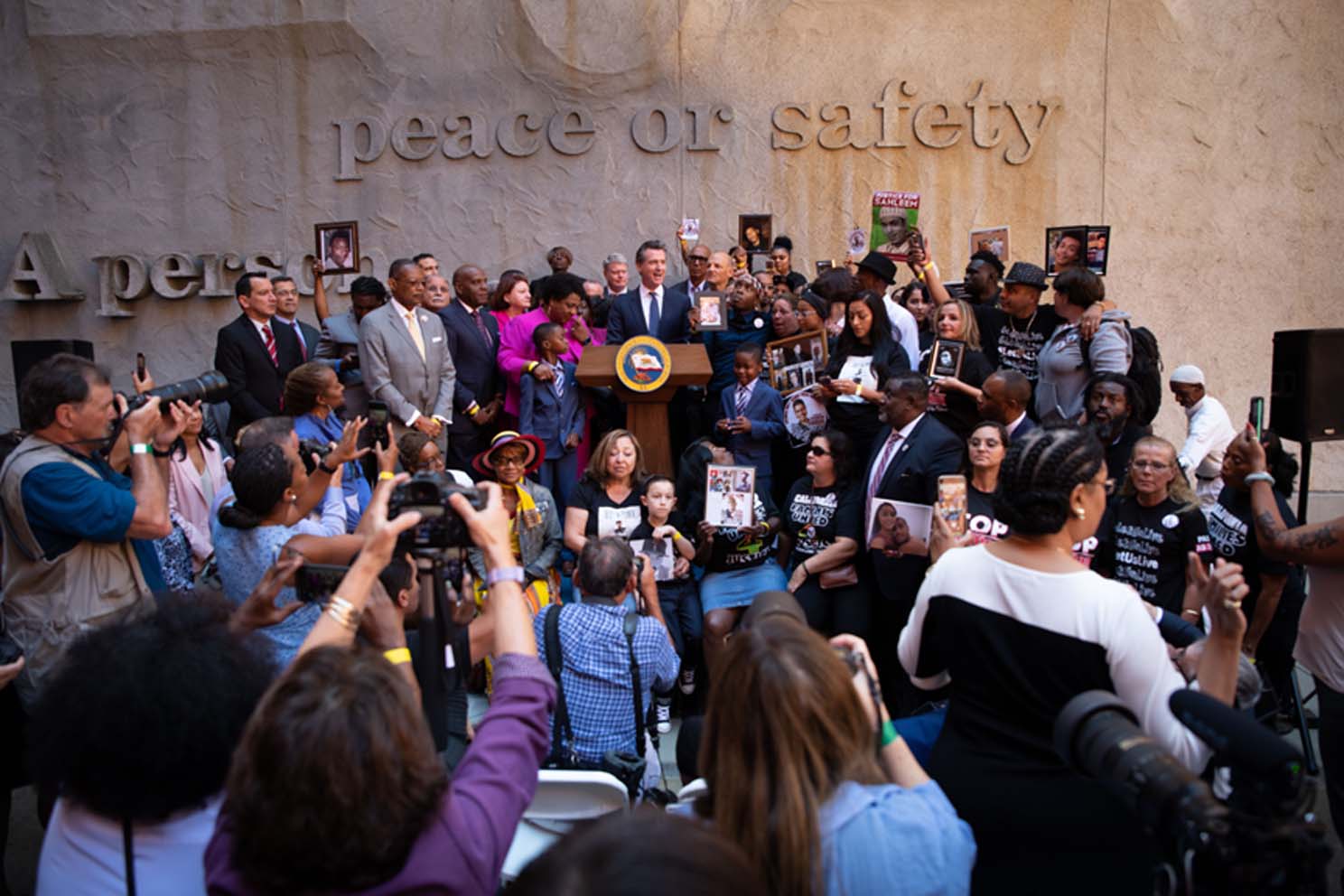 Today Gov. Gavin Newsom signed into law one of the strongest measures in the country intended to deter police officers from killing civilians while pursuing criminal suspects.

After a grueling yearlong process that survived bitter fights, tense negotiations and impassioned speeches, on July 8 the Senate voted 29-1 to pass AB 392, the California Act to Save Lives.

In May, law enforcement organizations, once staunch opponents of the bill, held a private meeting with the governor and members of the legislature and reached common ground on some of the language in the legislation. Advocates of the bill said those amendments helped the bill gain wider support among members of the Assembly and Senate, many of whom were strongly opposed when the proposal was first introduced.

Inspired in part by the 2018 shooting of an unarmed 22-year-old African-American man, Stephon Alonzo Clark, by police officers in Sacramento, the bill proposes changes to California’s penal code regarding “justifiable homicides” by “peace officers.” It’s language requires cops to only use deadly force “in defense of human life” when a suspect poses an “imminent threat of death or serious boldly injury to themselves or others.”

“With so many unnecessary deaths, I think everyone agrees that we need to change how deadly force is used in California,” said Weber, who is also chair of the California Legislative Black Caucus. “We can now move a policy forward that will save lives and change the culture of policing in California.”

The bill, which was initially sponsored by the civil justice group Black Lives Matter (BLM), also calls for police officers to rely on training and exhaust all resources available to them, whenever possible, before shooting to kill. The bill defines “imminent harm” as a threat that must be “instantly confronted.” It rules out fear of future harm – no matter how great or likely the potential danger is.

In April, the “Act to Save Lives” cleared its first hurdle when the Assembly Public Safety Committee voted 5-2 in favor of the legislation.

Shortly after, state law enforcement groups – including the California Highway Patrol, the Peace Officers Research Association of California and the California State Sheriffs’ Association – announced that they had taken a neutral position and would no longer oppose the proposal after meeting with Gov. Newsom to smooth out differences.

When Weber presented the revised version of AB392 with the input of the police groups, Black Lives Matter dropped its sponsorship.

“We knew that it would be an uphill battle, especially with police associations opposing the bill,” said Melina Abdullah, co-founder of the Los Angeles chapter of Black Lives Matter.     “Unfortunately, in efforts to get law enforcement to lift their opposition, the bill was so significantly amended that it is no longer the kind of meaningful legislation we can support.”

In its original form, AB 392 explicitly redefined the state’s legal standard for police officers’ use of lethal force, replacing the description “reasonable” with “necessary.” Necessary force, it spelled out, is when “there is no reasonable alternative.”

Although the word “necessary” remains in the current language of the law, its definition has been omitted, leaving it up to the courts to determine on a case-by-case basis.

After the revisions, the bill now requires investigators and prosecutors to consider “the totality of circumstances” leading up to a police officer’s use of lethal force. Before the passing of AB 392, the law only took into account the immediate actions taken before the shooting.

This latest iteration of AB 392 also allows for the behavior of the suspect to be examined.

“This is an important bill, one that will help restore community trust in our criminal justice system,” said Governor Newsom. “I would like to thank Assemblymember Weber, Senate Pro Tem Atkins, Speaker Rendon and our legislative leaders who all worked tirelessly to get us to this point.”

In California, there have been more incidents of police officers using lethal force against African Americans and Latinos than in any other state. In 2017 alone, cops killed 172 civilians. Latinos made up a disproportionate 47.1 percent of that total number, and Blacks accounted for 15.1 percent.

“We are proud to stand with Assemblymember Weber in support of AB 392,” said Peter Bibring, Police Practices Director for the The American Civil Liberties Union (ACLU) of California. The ACLU is a leading supporter of the legislation.

“For far too long, California has ignored the problem of deadly police shootings, their devastating aftermath on families and communities, and the enormous racial disparities that accompany these shootings,” he said. “This groundbreaking bill draws directly from use of force policies that individual law enforcement agencies have successfully adopted throughout the country.”

Abdullah insists some of the changes to the bill are “problematic.” But, overall, she still sees it as progress.

“We still think its important legislation,” she says. “Just not as far-reaching as we hoped it would be.”

Assembly Speaker Anthony Rendon (D-Lakewood) says AB 392 would move California from being one of the most permissive states when it comes to the use of police force to one of the toughest.

“We need this resolution to save lives, protect public safety, and guarantee justice in every community,” he says.