The Community Celebrates the Life of Kenneth Joseph George 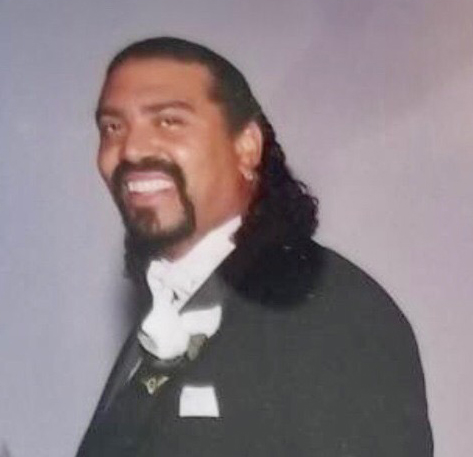 Pomona, CA — Kenneth George was born on July 4, 1964 in New Orleans, Louisiana to Raymond Cassard and Emma Mary George. He was the youngest of five children along with Raymond Jr., Gary, Karen, and Keith. Soon after he was born, the family move to Los Angeles, California. His family stayed there briefly but moved soon after the Watts riots started. His father didn’t take any chance with the safety of his family and bought a house in the City of Pomona.

Kenneth attended Kellogg Elementary, Marshall Jr. High, and Ganesha High School. Beyond his formal schooling, he was a self-taught and resourceful man. He became a successful business entrepreneur which allowed him to live very well by his endeavors.

As a child, Kenneth attended St. Joseph Catholic Church where he made his First Communion and Confirmation. Later on, in his life, he started attending Confirmed Word Faith Center in Pasadena where he received Jesus Christ as his Lord and Savior.

Kenneth married the love of his life Kimberly George on November 16, 2002. They were a splendid couple that enjoyed sports, dining, entertaining, and traveling. They were a winning team that stuck together through the good and tough times. Although Kenneth had many health issues, he always would breakthrough and press on to recovery. As he did, he maintained his joy, courage, and faith as he lived his life.

Kenneth was a bright light in the life of his family and friends and was there for them. He was a man of insight and wisdom that he deposited in his son Kevin and entourage. Kenneth was preceded in death by his parents, Raymond and Emma, and brother Raymond Jr. He is survived by the loving wife, Kimberly, son Kevin, brothers Gary (wife – Donna), Keith, and Romanus, sisters Karen George, and Alice

Bonner, and numerous nieces and nephews.

With Kenneth’s confession and acceptance of Jesus Christ as his Lord and Savior we will see him again on high.

“For the Lord himself shall descend from heaven with a shout, with the voice of the archangel, and with the trump of God: and the dead in Christ shall rise first: Then we which are alive and remain shall be caught up together with them in the clouds, to meet the Lord in the air: and so shall we ever be with the Lord. Wherefore comfort one another with these words.” 1 Thessalonians 4:16-18