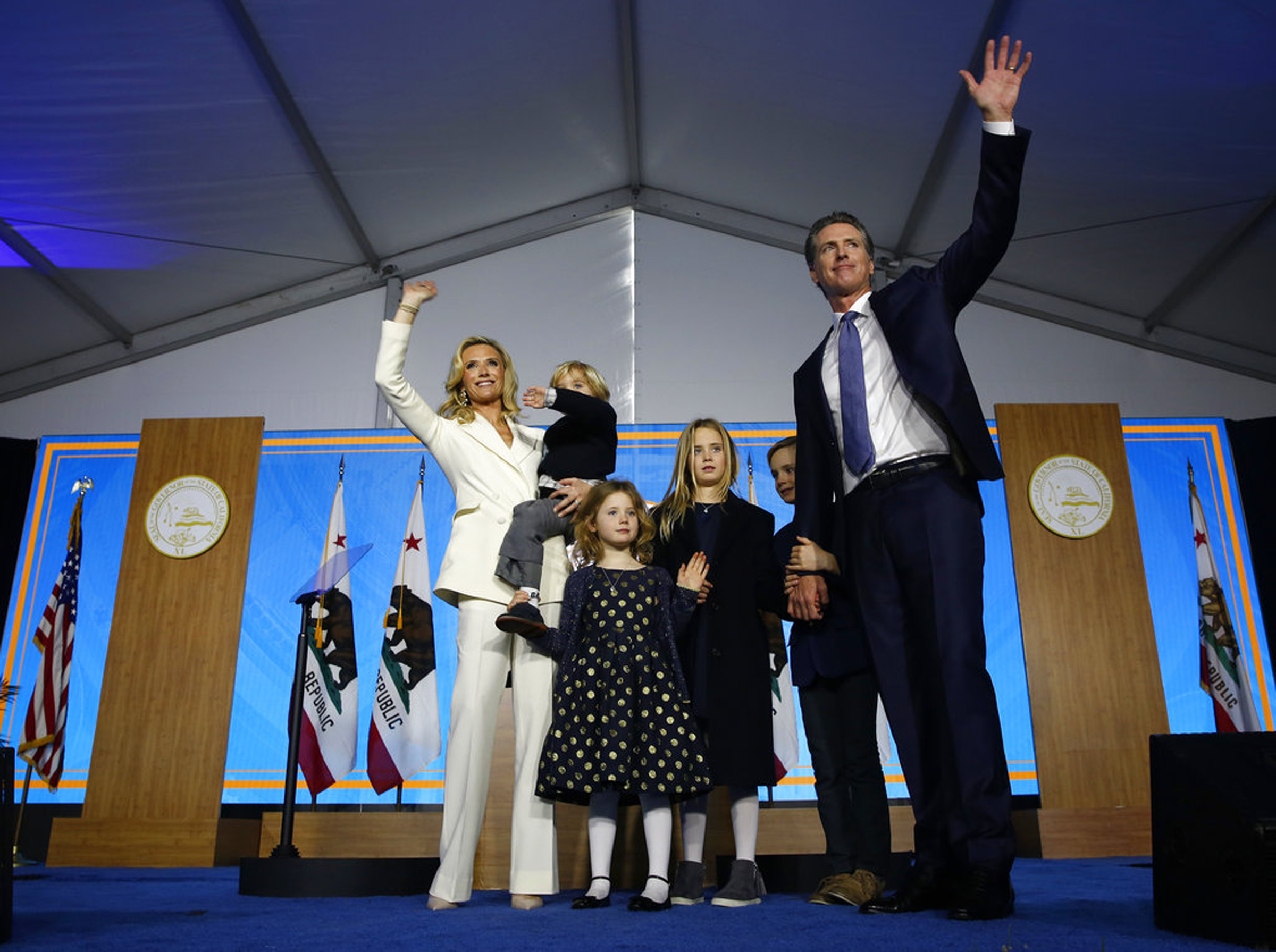 Sacramento, CA — Former Mayor of San Francisco and Lt. Gov. Gavin Newsom was sworn in as California’s 40th governor on Monday to the backdrop of serene gospel music provided by Compton-based choir Voice of Destiny. Newsom’s first speech as governor touched on his vision for California and his plans to keep the Golden State in the national spotlight.

“This is a place where anything is possible,” said Newsom who was joined on stage by his wife and four children. During the speech, Newsom said that while California had many successes, such as Silicon Valley and Hollywood, there was also startling signs of wealth inequality.

“We … face a homeless epidemic that should keep each and every one of us up at night,” he said.

“Back then, we were $27 billion in debt. Unemployment above 12 percent. The worst credit rating of any state in our nation. Today, our economy is larger than all but four nations in the world. We’ve created nearly 3 million jobs and put away billions for a rainy day,” he said.

According to Newsom, he wanted his policies to bring the state together.

Newsom also touched on some of the areas that he planned to focus on such as supporting organized labor.

“Working people deserve fair pay, the right to join a union, and the chance at a middle-class life for themselves and their families,” he said.

Newsom also compared the success of California with the political chaos in Washington, D.C.

“At a time when so much of America is divided, we are united. Our people are big-hearted and fair-minded, when those qualities are more vital than ever. I’ve seen that again in just the past few weeks,” said Newsom. (He recently visited Paradise, a community that was devastated by wildfires.)

Mark Ridley-Thomas, a member of the Los Angeles County Board of Supervisors, said he was impressed by Newsom’s inclusive message. Ridley-Thomas also liked some of the topics Newsom touched on such as affordable housing, reducing child poverty and jobs.  Newsom also quoted an African proverb that says, “If you want to go fast, go alone; if you want to go far, go together.”

Ridley-Thomas also gave a pointed message to Democrats who want to win the African American vote. Newsom’s message was more than just being “anti-Trump,” he said.

“Gavin Newsom is going to be a great governor. Today he showed his commitment to inclusion and highlighted the diversity of California through his inaugural ceremony. His speech was all-encompassing and set the tone that we are moving towards being one California,” said Taisha Brown, vice president of the African American Caucus, California Democratic Party.

Like Ridley-Thomas, Rev. Shane Harris, president and founder of the newly-formed national group, the People’s Alliance for Justice, a civil and human rights organization, was optimistic about Newsom’s speech.

He said the issues Newsom discussed, free community college, child welfare and the private prison industry, are all issues that resonate with African Americans.

During his address, Newsom made a few other jabs at the Trump administration, especially its treatment of migrants on the border.

“We will offer an alternative to the corruption and incompetence of the White House,” said Newsom.

He was also critical of other areas such as drug companies’ price gouging, the gun lobby, polluters and the payday loan industry.

“Here in California we have the power to stand up to them and we will,” said Newsom.

He also said Washington had failed on climate change and praised Brown for his work on the issue.

Newsom has many big projects he plans to implement such as spending almost $2 billion on early childhood education. He also plans to make community college free. Newsom added that he looked forward to working with his Democratic colleagues in the legislature on his agenda. Democrats control both houses.