Home > IVN Presents Series: "Being A Black Man In America" > White Man Posts Cards Against Humanity Play About Gunning Down African Children With an AR-15, Gets Arrested. Joke’s on Him?

White Man Posts Cards Against Humanity Play About Gunning Down African Children With an AR-15, Gets Arrested. Joke’s on Him? 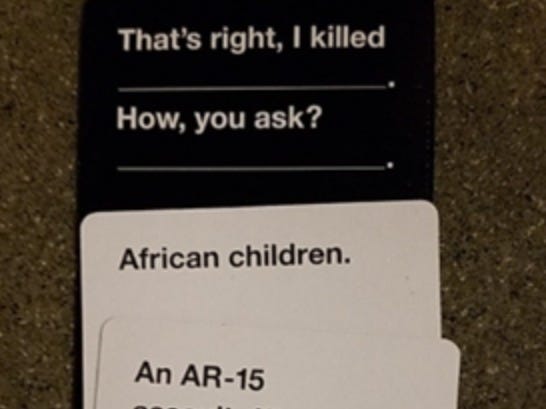 There’s something about Facebook that just makes white people go, “I’m gonna end my whole career today.” In one of the most inventive instances of playing oneself, a Florida man was arrested after posting, among other things, a racist Cards Against Humanity play.

According to Insider, this was only one of many racist posts from 30-year-old Alex Bancroft. In one of his most recent posts, Bancroft threatened to shoot Black Lives Matter protesters. “u can yell black power but when I yell white power, I am raciest (sic). I am going to start target practice on these mother f****** with there (sic) signs,” he wrote last Friday with impeccable spelling and grammar. When someone said they were doubtful he would keep that same energy when not behind a keyboard, he replied: “keep ur eyes on Fla news.”

Bancroft was arrested and charged on one count of making a written threat to kill or do bodily injury, a second-degree felony in Florida. “The Hillsborough County Sheriff’s Office takes all threats to injure or kill others very seriously, and this includes threats made online on various social media platforms,” Sheriff Chad Chronister said in a statement.

Deputies said that Bancroft had repeatedly posted racist and threatening things on Facebook, including a picture of a particularly foul play from the game Cards Against Humanity. The game involves one player placing a black card down that features a statement with a blank spot and the other players placing a card down that they believe is the funniest response. Bancroft posted a picture of a card that said “That’s right, I killed _____. “How, you ask? ____” with cards that read “African Children,” and “an AR-15 Assault rifle.”

There is no word on whether Bancroft is still in jail or what his bail was set at. For the life of me, I don’t understand why this many years into the game white people still feel the need to be racist on Facebook. It always ends with someone out of a job or in jail. I feel like we need a D.A.R.E but for white people who feel the need to be outwardly racist.

Remember grown-ass adults, when you or one of your friends feel the need to rant about how “Black Lives Matter are the real racists,” just don’t post. It’s not worth it.