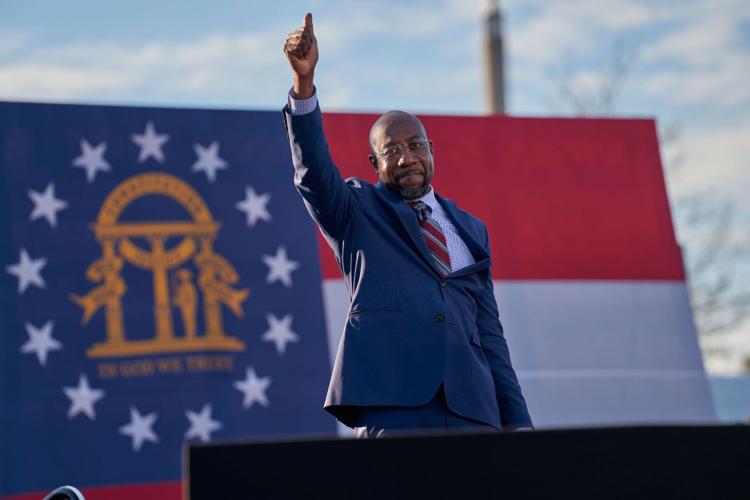 Warnock, who leads Ebenezer Baptist Church in Atlanta, Ga., made history by becoming the first Black person to be named senator from that state. Warnock is a second-generation preacher and one of 12 children who grew up in the projects.

He recognized the significance of his election in a statement released after his victory.

“My roots are planted deeply in Georgia soil,” said Warnock. “…A son of my late father who was a pastor, a veteran and a small businessman and my mother who, as a teenager growing up in Waycross, Georgia, used to pick somebody’s else’s cotton. But the other day, because this is America, the 82-year-old hands that used to pick somebody else’s cotton went to the polls and picked her youngest son to be a United States senator.”

Warnock defeated Loeffler in a bruising race. Loeffler, who was appointed to her position, often sunk to lows in the race by accusing Warnock, a pro-LGBTQ social activist, of being a “communist” and a “radical.” Her campaign also darkened his skin in an ad. Loeffler also veered sharply to the right during the campaign. She proclaimed herself a strong Trump supporter and came out against Black Lives Matter. This raised the ire of WNBA team Atlanta Dream, who protested against Loeffler. (She’s part-owner of the team.) She also put out a strange ad that said she was “to the right of Atilla the Hun.” Loeffler was also pictured campaigning alongside a white supremacist.

However, Loeffler was dogged by a robotic debate performance and allegations that she used her position to profit from stock trades. When Loeffler learned of the COVID-19 threat during a security briefing, she sold stock. Perdue also faced the same allegations. He was also criticized for deliberately mispronouncing Vice President-elect Kamala Harris’ name.

Ossoff, who’s Jewish, proclaimed himself the winner on Wednesday after he had an unassailable lead over Perdue. A former journalist, Ossoff is a protégé of the late Rep. John Lewis, a civil rights legend.

However, both victories have been attributed to Stacey Abrams and the changing demographics of Georgia. As more Black and brown people have moved to the state, they’ve also changed the voting base and Abrams tapped into that. Abrams ran for governor in 2018 and lost in an election marred by allegations of voter suppression.

“Black voters in the state were the deciding force in both Democratic victories, particularly in urban and rural communities with large Black populations. Typically, these groups are less likely to vote in state and local contests than their white counterparts,” said The Guardian. “The runoffs garnered national attention after Black voters – along with new Georgia residents of all races – successfully flipped the state from reliably Republican to a competitive purple in November, with the Democrat Joe Biden narrowly winning over the incumbent president by more than 11,000 votes.”

The Guardian also stated that both Warnock and Ossoff received more than 90 percent of the Black vote.

“Black women did this—but this isn’t just ‘Black Girl Magic.’ This is the result of pure organizing, labor, and love that Black women have poured into GA. Gratitude to every one of my sisters who willed the possibilities of this moment into existence. We see you and we love you,” said Bush in a tweet.

However, not everyone’s happy at Abrams’ growing political influence. University of Tennessee-Chattanooga assistant football coach Chris Malone was fired after making a joke about Abrams’ weight on Twitter.