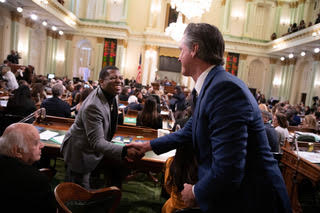 On Dec. 5, Asssemblymember Dr. Corey Jackson (D-Riverside) was sworn in at the State Capitol on the first day of the 2022-23 Legislative session.

Right after taking the oath of office to represent California’s 60th Assembly District, Jackson appeared to be in awe when he walked into his new role — and into his brand new, empty state office two blocks away to a desk, chair, an empty bookshelf, an American flag, and a California State Flag.

“Now it’s time to go work,” he said, smiling, to his staff and visiting constituents who attended the swearing-in ceremony. “I came here (to Sacramento) to talk because my business is to talk about issues and how to fix them.”

The first Black openly LGBTQ+ person elected to the State Assembly, Jackson is the founder and Chief Executive Officer of SBX Youth and Family Services. He is former member of the Riverside County Board of Education and a graduate of California Baptist University where he received Master and Doctor of Social Work degrees.

Jackson is one of the new faces in the last 16 months to join the California Legislative Black Caucus (CLBC). Lola Smallwood-

Smallwood-Cuevas represents the 28th Senate District. She is the only Black woman in the Senate. A graduate of California State University at Hayward (now called CSU-East Bay), she is an educator, labor organizer, community advocate, researcher, and journalist.

Smallwood-Cuevas replaces Sydney Kamlager who was elected to the U.S. Congress seat held by Karen Bass. Last month, Bass was elected the first Black woman to be mayor of Los Angeles.

“I am the 63rd woman ever to be sworn into this illustrious body and one of a handful of dynamic Black women leaders to grace this chamber with their excellence,” Smallwood-Cuevas posted on her Facebook page last week.

In November, due to redistricting McKinnor was elected to represent the 61st Assembly District which contains many of the same communities as the previous 62nd District.

“Today (Dec. 5) I was sworn in for my first term in the California State Assembly,” McKinnor posted on her Facebook page. “I am proud to represent Assembly District 61.”

Bonta’s district covers the East Bay area of Northern California. It includes a large portion of the City of Oakland and the cities of San Leandro and Alameda.

Bonta, who self-identifies as a Black Latina, holds a Bachelor of Arts in psychology from Yale University, a Master of Education from Harvard Graduate School of Education, and a Juris Doctorate from Yale Law School.

As mayor of Suisun City, Wilson was the first Black woman mayor to serve in Solano County. She is a graduate of California State University, Sacramento with a Bachelor of Science degree in Business Administration with a concentration in Accountancy

The CLBC elected Wilson and Sen. Steven Bradford (D-Gardena) to serve as its Chair and Vice-Chair for the 2023-2024 legislative session.

“I look forward to working with my colleagues to uplift over two million Black residents living in California,” Wilson said in an August written statement.

Two CLBC members will not be returning. Outgoing Assemblymember Jim Cooper (D-Elk Grove) was elected as Sheriff of Sacramento County in June, and Kamlager will begin serving in the U.S. House of Representatives in January 2023.

CLBC members make up 10% of the Assembly and 5% of the Senate. California’s Black population is about 6.5% according to the US Census.

The CLBC, founded in 1967 under the leadership of Sen. Mervyn Dymally, describes itself as a bipartisan and bicameral body of Black lawmakers committed to eliminating existing racial and social disparities and inequities for Black Americans.

The current and former members of CLBC believe that a “caucus representing concerns of the African American community” would furnish political influence and visibility far beyond their numbers, according to their mission statement.

“I am humbled beyond words,” Bradford said as he received the award. “I know that I’m only able to do the work I’m doing because of the people that have come before me. I stand on their shoulders and hope that one day others will reach even greater heights. I graciously accept this award and commit to continuing my work to promote equity, equal justice, and opportunity in every region of California.”