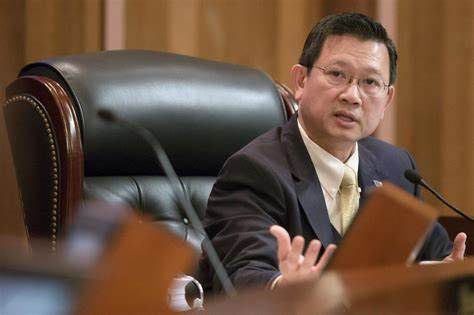 Republican Andrew Do, member of the Orange County Board of Supervisors, proposed a resolution at Tuesday’s meeting to declare racism a public health crisis, according to CNN. Though Black people and people of color have been trying to ring the alarm about this issue for decades, a predominantly white county taking the same stance could send a message.

“Experiencing racism has been associated with increased risk for numerous mental and physical chronic health conditions, like heart disease, cancer, asthma, stroke, Alzheimer’s, diabetics (sic), and suicide,” said Doug Chaffee (D.), chairman of the board. “These health disparities underscore the urgent need to address systemic racism as a root cause of racial and ethnic health inequities and a core element of public health efforts.”

The board unanimously adopted the resolution which will review county government policies and operations through an ad hoc committee responsible for identifying concerning practices, the report says. This includes examining social services facilities, homeless shelters and any area where marginalized communities are historically denied access, Do told CNN.

Of course the resolution didn’t pass without some serious backlash from the public who, while trying to argue racism doesn’t exist, proved it is alive and well.

During the public comments segment of the meeting, one speaker equated Do’s resolution with critical race theory – an academic concept that seeks to understand and address inequality and racism in the US, which has been maligned by many conservatives.

And just this week, as the board was preparing to vote on Do’s resolution declaring racism a public health crisis, an audience member yelled at Orange County Health Care Agency Director Clayton Chau, telling him to “Go back to China!”

Do quickly came to his colleague’s defense, slamming the man who had hurled the slur as well as those claiming the resolution was unnecessary in Orange County.

“Really, go back to China?” Do said. “And you think racism is dead?”

California documented a skyrocket in hate crimes since 2017 which only became worse after the beginning of the COVID-19 pandemic and murder of George Floyd. Orange County alone saw a 165% increase in hate crimes in 2021 alone compared to the previous five years. Though, these crimes certainly date back to the 1970s, when Do experienced racism first-hand after coming to the States as a Vietnam refugee.

“When I first came over, it was more extreme. Now, more lately, it’s more subtle. I believe it’s there, but that’s from a small minority of people that I come into contact with,” said Do, via CNN.

It’s powerful that Do not only spoke up but swayed the board to adopt this resolution, regardless of his political party being the driving force against most initiatives to acknowledge systemic racism. If only everyone could get with the program.