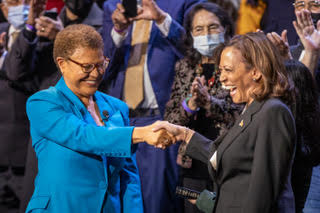 Vice President Kamala Harris, who has a home in Los Angeles, conducted the swearing-in of the new mayor. Though originally planned to be conducted at Los Angeles City Hall, rain moved the ceremony to the Microsoft Theater in downtown.

In her inaugural address, the former congresswoman set the tone for new office.

“Tomorrow morning, I will start my first day as mayor at our city’s Emergency Operations Center, where my first act as mayor will be to declare a state of emergency on homelessness,” Bass said. “My emergency declaration will recognize the severity of our crisis and break new ground to maximize our ability to urgently move people inside, and do so for good. And it will create the structure necessary for us to have a true, unified and citywide strategy to set us on the path to solve homelessness.”

Homelessness was one of the major issues debated during the election. Bass and real estate developer Rick Caruso sparred over strategies of how to get people into housing in a city where, according the United States Bureau of Labor Statistics, residents spend 38% of their income on housing, compared to the national average of 34.3%.

Bass made the point to elected leaders in attendance as well as Angelenos that she would be calling on them to work with her to contend with the homelessness crisis.

“Vice President Harris, Governor Newsom — my colleagues in Congress here today — look for me on your caller ID. If we come together and focus on solutions rather than jurisdiction, on linking arms rather than pointing fingers – if we just focus on bringing people inside, comprehensively addressing their needs, and moving them to permanent housing with a way to pay their bills — we will save lives and save our city – that is my mission as your mayor.”

Bass also spoke about her ambitions about addressing public health, the violent crime surge, the economy and the environment.

“Right now, there is a role for everyone,” Bass proclaimed. “If you are a Hollywood creative, I call on you to help me inspire people to help our city. If you are a tech entrepreneur, I call on

you to help me make City Hall run smarter, faster and with more accountability. If you are retired, I call you to share your wisdom with our youth. If you are a community organizer, let’s organize our neighborhoods together. And finally, I call on you to come work for the city. Did you know L.A. City has hundreds of vacancies in the very departments that respond to community needs? If you want a good paying union job — you should literally come work for the City of L.A. I call on the people of our city to not just dream of the L.A. we want, but to participate in making the dream come true.”

“We are all going to make so much history together in a state that has enshrined in our constitution a woman’s right to decide what happens to her body.”

Bass acknowledged outgoing Mayor Eric Garcetti for his 21 years of service to the city. Garcetti sat in the front row next to Gov. Gavin Newsom and California’s First Partner, Jennifer Siebel Newsom.