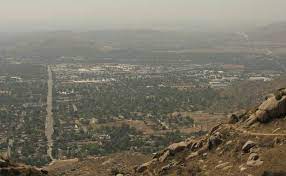 The Inland Empire has long attracted people because of its low cost of living. But Inland Empire residents may end up paying a long-term price for living in the area. According to several studies, the IE has some of the dirtiest air in the country. And according to research from the University of California, Riverside (UCR,) the air quality has a serious effect on residents’ lives.

The Guardian, a British-based newspaper, raised awareness about this earlier this year. According to The Guardian, the boom in warehouses dotted around the region adds to the poor air quality.

“The research compiled by the People’s Collective for Environmental Justice (PCEJ) and other local groups and shared with the Guardian, shows how warehouses have proliferated in the Inland Empire, an industrial region 60 miles east of Los Angeles. The warehouses, which bring severe truck pollution to neighborhoods, are correlated with bad air quality and related health problems that disproportionately affect people of color, the data shows,” said The Guardian.

Research from the People’s Collective for Environmental Justice also found that populations living within a half a mile radius of a warehouse were 85% people of color.

Amazon has about 50 warehouses in the IE and there is a direct correlation to pollution. For example, according to The Guardian article, San Bernardino has 75 warehouses and ranked no. 1 in ozone pollution.

“We’re dealing with smoggy summers that are getting worse and worse,” said Yassi Kavezade, of the Sierra Club’s My Generation campaign, in The Guardian article. “We’re sick of getting alerts that say avoid being outside … because of dirty air. This is not normal.”

There’s also a racial element to the issue. The majority of the people who live in the IE are Black and Latino. Locating warehouses in the region, which pollute the air, is like locating a chemical plant in a Black community. This has been described as environmental racism, a term coined in 1982 by Benjamin Chavis, former NAACP president.

“Racial discrimination in the deliberated targeting of ethnic and minority communities for exposure to toxic and hazardous waste sites and facilities, coupled with the systematic exclusion of minorities in environmental policy making, enforcement, and remediation,” said Chavis in “Confronting environmental racism: voices from the grassroots.”

“A 2016 study in Environment International found that long-term exposure to the pollutant (particle matter) is associated with racial segregation, with more highly segregated areas suffering higher levels of exposure. A 2012 article in Environmental Health Perspectives found that overall levels of particulate matter exposure for people of color were higher than those for white people,” according to a 2018 Atlantic article.

However, according to a study published by UCR professors, the region’s poor air quality makes IE residents more susceptible to Covid-19, a disease that attacks the lungs.

“We wrote this commentary to call attention to the particular vulnerabilities in the Inland Empire that have been exacerbated during the pandemic. Members of environmental justice communities experiencing racialized poverty, classified as essential workers and thus not able to shelter in place at home, and living in a region with some of the worst air quality in the country, have borne the brunt of it,” said Jade Sasser, an associate professor of gender and sexuality studies and lead author, in a press release. “We wanted to make an intervention by raising awareness of the inequities right here in our own communities.”

The findings were published in the Journal of Exposure Science & Environmental Epidemiology.

Sunni Ivey, an assistant professor of chemical and environmental engineering, said more awareness needs to be raised about the link between exposure to poor air quality and Covid-19.

“Research shows that inhalation exposure to fine particles and other pollutants leads to increased inflammation in the lungs and the development of asthma. We need more information on the interaction between respiratory health and COVID-19 severity,” said Ivey.