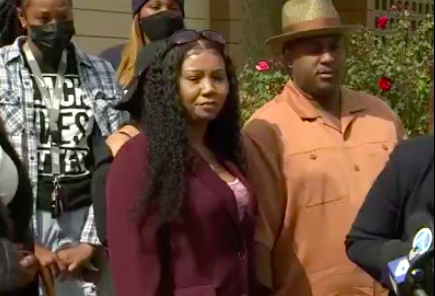 Lashay Grayes, a mother who complained about police violence, has been arrested for a separate incident.

According to a Rialto Police Department report, officers responded to a call for help from a local clinic on Feb. 25. Staff at a Rialto medical clinic requested help because Grayes was “acting irate.” The officers reported that the clinic staff also accused Grayes of breaking an item in the clinic. A citizen restrained Grayes and the police officers attempted to transport her to a holding facility.

Grayes and two officers were injured in the incident and treated at a local hospital. According to the police report, Grayes is being charged with resisting arrest, battery on a police officer, disturbing the peace and vandalism. She is being held on a $50,000 bond.

Grayes recently held a press conference to complain about police using excessive force on her daughter. A video shows the teenager tussling with the police and an officer using a chokehold to restrain her.

Grayes was incensed that the police “put hands” on her daughter and has filed a lawsuit demanding $25,000 in restitution.

According to the San Bernardino NAACP, police have apologized for the incident.

“I have personally viewed officer body worn camera footage and although the video depicts the juvenile resisting officers, we are investigating the officer’s decision to trip the juvenile to the ground and later placing his hand on the juvenile’s throat during the arrest,” said Chief Mark Kling in a press release.

The NAACP expressed concern about how the young woman was treated.

“Blacks make up 13.0% of this community and do not deserve to be treated in this manner. Females make up 50.4% of this community but 0% in police management,” according to an NAACP press release. “We have to ask the question, if she were a white teenager, would the officers have even stopped? And after they would have stopped it definitely would not have escalated into an arrest. From the video, we have seen, the officers are much larger than the teenager, so they cannot say they were afraid of being hurt by this much smaller girl.”