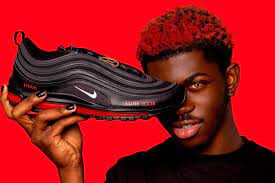 Rapper Lil Nas X may be a youngster (he’s 21) but he’s mastered the age-old trick of using controversy to sell your product. The music video for his new song “Montero,” is controversial. The video features eye-popping graphics that show Lil Nas X involved in same-sex acts, appearing as the serpent in the Garden of Eve and descending to hell to dance with the Devil, before killing him. The song is loosely based on the movie “Call Me By Your Name” and is actually about love and lust. In an interview with Genius, Lil Nas X, said the Devil figure in the video represents temptation and lust.

And Lil Nas X is also marketing sneakers, claiming to have human blood in them. The “Satan” shoes, of which only 666 are made, have developed their own controversy. The sneakers are modified Nike Air Max 97s. Nike has filed a lawsuit against the company that’s marketing the product, MSCHF. But the sneakers have already sold out and they retail for more than $1,000!

Lil Nas X is operating on the premise that there is no such thing as bad news. The video has already received more than 55 million views.

According to BusinessInsider, MSCHF marketing is also known for using controversy to market its products. They also marketed shoes that claim to have holy water in them.

“’The layout of its headquarters is a stark reflection of the MSCHF’s unofficial doctrine to adhere to ‘structured chaos.’ Daniel Greenberg, MSCHF’s head of commerce, flaunted how MSCHF shirks the traditional business model: The MSCHF team currently sets aside no budget for advertisements and marketing, and conducts no user testing of its products,” said BusinessInsider. “It’s also unclear whether, or how, the MSCHF team makes any money. The company used to run nontraditional ad campaigns for brands like Casper and Target, but Whaley says MSCHF stopped doing that in September 2019 to instead ‘go all in on our own stuff.’”

Lil Nas X is adept at using social media and controversy to market his product. In a New York Times video, he called the Internet his “parents.” He also used Twitter and TikTok to push his smash-hit song “Old Town Road,” and he seems to be doing the same thing with his new song.

According to The New York Times, Lil Nas X, has drawn a wide swath of critics with his new song. But the article said he’s using Twitter to troll them and get publicity for his latest project. Apparently, South Dakota Gov. Kristi Noem has criticized Lil Nas X. He hit back by pointing out that, as someone who’s running a state, she should be concerned with more significant issues than a music video.

“After Noem tweeted about his Satan Shoes, he groaned, ‘ur a whole governor and u on here tweeting about some damn shoes. do ur job!’ Lucas suggested that the ‘Montero’ video might not be appropriate for children, and Lil Nas X eye-rolled back, ‘i literally sing about lean & adultery in old town road. u decided to let your child listen. blame yourself,” said The Times.

Only time will tell if Lil Nas X’s flirtation with Satanic imagery generates a long-term boycott. But Lil Nas X is gay, and he’s part of a group that is already marginalized by the far-right. He’s not going to lose any fans there.

“I spent my entire teenage years hating myself,” said Lil Nas X in a social media post. “So i hope u are mad, stay mad, feel the same anger you teach us to have towards ourselves.”

Meanwhile, the song is selling. Proving there’s no such thing as bad news in the entertainment business. Lil Nas X is using the same technique that shock rocker Alice Cooper, Madonna and NWA all used before. And he’s laughing all the way to the bank.