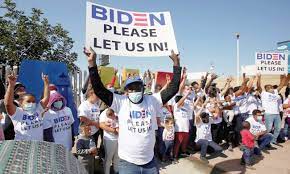 Washington, D.C. — President Joe Biden is getting good poll numbers in most areas, such as the coronavirus pandemic and economic recovery. But there is one area where he’s faring poorly; immigration.

“Two-thirds of Americans approve of the job that Biden is doing with the pandemic. That includes almost a third of Republicans. Overall, the president’s approval rating is up to 52%, and his handling of the economy has now reached 51%,” said an NPR story that cited figures from an NPR/Marist poll. “All three are improvements from a poll conducted earlier this month. But just 34% of Americans approve of Biden’s handling of immigration, while 53% disapprove. A majority of independents and even a quarter of Democrats disapprove of the job he’s doing on the issue.”

Biden’s facing criticism for the problems on the border with Mexico. As more migrants arrive from Central America, Biden is being criticized for migrant camps on the border, which are increasingly becoming full.

But some critics say that the mainstream media is simply repeating right-wing talking points. The right-wing media, which often follows a white nationalist narrative, has accused Democrats of being weak on border issues so they can admit more Latinos, who tend to vote Democrat. But the border has been a mess for generations. And the last few presidents failed to solve the issues.

Media critic Eric Boehlert said too many Washington, D.C. reporters are simply following a Republican narrative and not looking into the real issue.

“Eagerly joining forces with partisan Republicans, the Washington Post over the weekend uncorked a doomsday write-up about the surge of young migrants currently overwhelming U.S. facilities along the Southern Border. Laying all of the blame for the three-decade problem directly at the feet of the new, two-month-old Democratic administration, the Post article echoed every conceivable GOP talking point,” said Boehlert in his PressRun column.

“Fact: This is not currently the ‘biggest border surge in 20 years.’ It’s not even close,” said Boehlert.

Some critics say the crisis on the border is manufactured. Migrants travel at this time because this is when the weather is best. So, the buildup on the border is something that happens annually.

Biden has responded to the criticism by dispatching Vice President Kamala Harris to oversee the issue.

But while Republicans criticize Democrats handling of the border issue, former President Donald Trump did an infamously bad job on immigration. He handled the issue by separating families, a policy that has been compared to torture, according to Physicians for Human Rights.

“These policies have profound health implications for migrant adults and children and violate basic human rights, including the right to be free from torture and enforced disappearance,” said the organization in a 2020 report.

Trump also put white nationalist Stephen Miller in charge of immigration. Although Miller is the offspring of Jewish refugees, he hates other migrants. At one point, he floated the idea of putting refugees in trains and deporting them as a way to deter other migrants.

The family separation policy was also designed to deter migrants from coming to America. But it didn’t work. They still came. The problems they face, such as crime, violence and environmental degradation, are so severe, child separation didn’t scare them.

“When Rosalina was expelled, she fainted on a street near the international bridge in Ciudad Juarez, Mexico. ‘I had no idea where I was, I had no idea where to go,’ Rosalina said in an interview from a Mexican shelter where she is staying after recently giving birth to her baby. She said she fled Guatemala with Leonardo and Marisol after a brutal assault and fears going back,” said Reuters.

The Trump administration’s child separation policy also created a new problem. Trump officials managed to lose track of more than 500 children and their families and had no way of reuniting them. The Biden administration has pledged to reunite children with their parents.