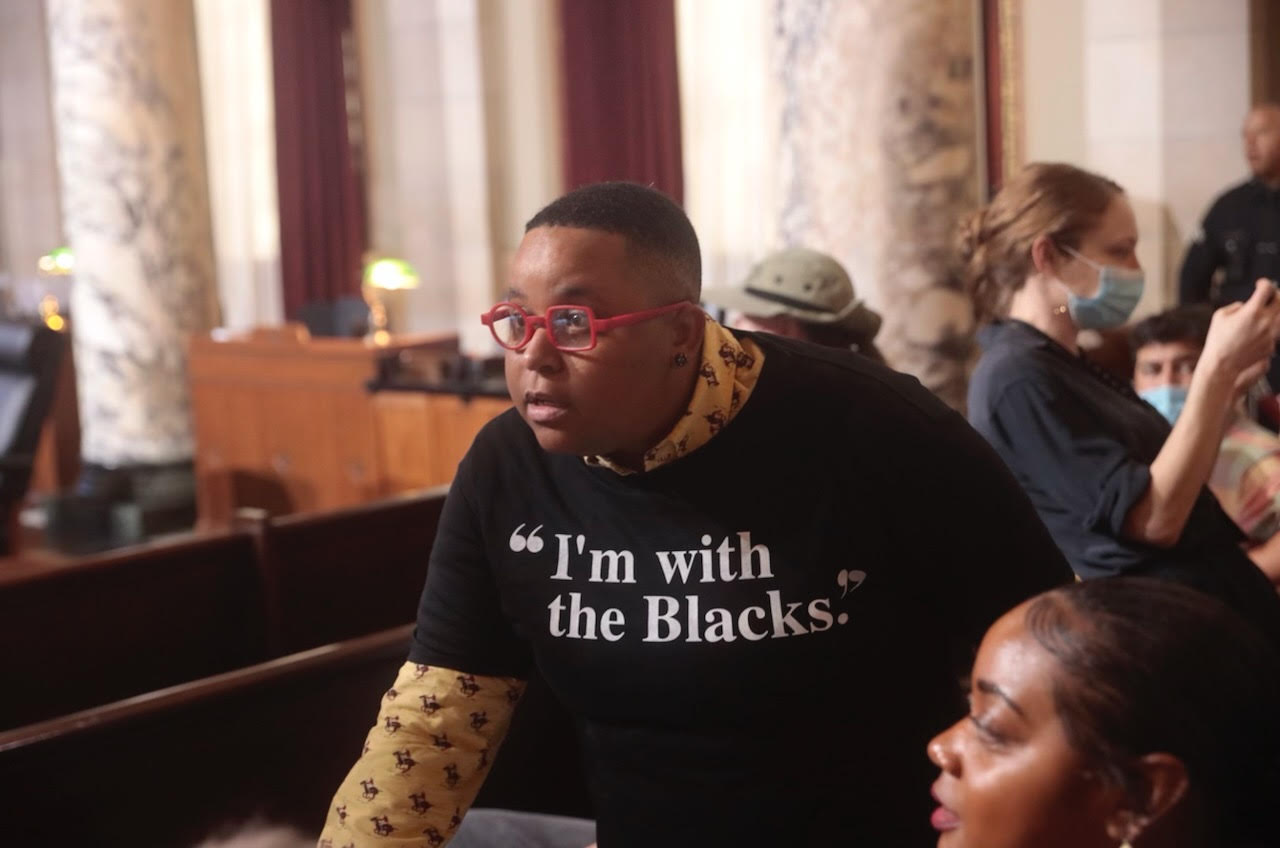 “This kid needs a beatdown. Let me take him around the corner, I’ll bring him right back,” Martinez said in the recording.

Since the recording of the October 2021 closed door meeting was leaked, leaders across the political and social spectrum, including Pres. Joe Biden and Sen. Alex Padilla have called for the resignation of all four people heard on the tape.

Herrera resigned on Monday. Martinez took a leave of absence on Tuesday, Oct. 11, before the regular scheduled City Council meeting, then resigned on Wednesday. De Leon and Cedillo appeared at the Tuesday meeting, but after drawing the ire of the agitated public, they withdrew from the chamber.

When the meeting finally started, one by one, members of the public, including Assemblymember Isaac Bryan (D-Los Angeles), who was adopted, delivered impassioned speeches demanding the resignation of the three councilmembers.

The Council meetings scheduled for Wednesday and Friday were cancelled because protesters have promised to return to disrupt proceedings until DeLeon and Cedillo resign.

On Friday, Assemblymember Bryan told California Black Media (CBM) “I’m inspired by the solidarity we’ve seen across communities, across race, class, geography and even political boundaries. We’ve got city elected officials, state elected officials, county elected officials all the way up to the Senator for California, Sen. Padilla and the President of the United States have not only chosen to engage in this conversation, but to call for justice in these resignations, call for accountability in his resignation.

“I’m inspired by that, and I think it shows a lot of potential for the future,” he continued. “But I’m also a little bit frustrated and still kind of healing from the fact that de Leon and Cedillo have refused to accept accountability, and the idea that they would show up to that council meeting [Tuesday] I think was a display of complete disregard for the people and a bit of arrogance quite frankly.”

Council member Bonin tested positive for COVID, so next week’s Tuesday and Wednesday meetings will be held in an online format.

Acting Council President Mitch O’Farrell’s (District 13) office said in a statement to CBM, “It would not be appropriate for Council members De León and Cedillo to attend regardless of the meeting format. Their failure to resign cannot indefinitely interfere with the council’s ability to conduct the people’s business. They need to do the right thing and resign.”

In addition to the outrage about the racist comments in the conversation, the release of the tapes has drawn scrutiny to the redistricting process itself. California Attorney General Rob Bonta announced on Wednesday that the California Department of Justice has launched an investigation into the Los Angeles City Council Redistricting Process.

“It seems like it’s way too political process here in the city of Los Angeles and it should be more independent and as Chair of the Assembly Elections Committee, it’s something that I want to look at, to see if there’s a role for the state to increase the fairness and the efficacy and the impartiality of this process,” Bryan told CBM.

A spokesperson for O’Farrell told CBM, “Councilmember O’Farrell has introduced a major charter reform measure, that would go before the voters, with the intention of expanding the number of city council districts, thereby increasing representation. If that were to pass, there would be an associated special redistricting that would need to take place.

On Tuesday’s Council agenda is an item about forming an independent redistricting commission for the city. O’Farrell is very eager to discuss and vote on this item.”

City Councilmembers De León and Cedilla did not respond to CBM’s requests for comments.