Home > Arts & Entertainment > JJ Fad Gets Its Own Street in Rialto

JJ Fad Gets Its Own Street in Rialto 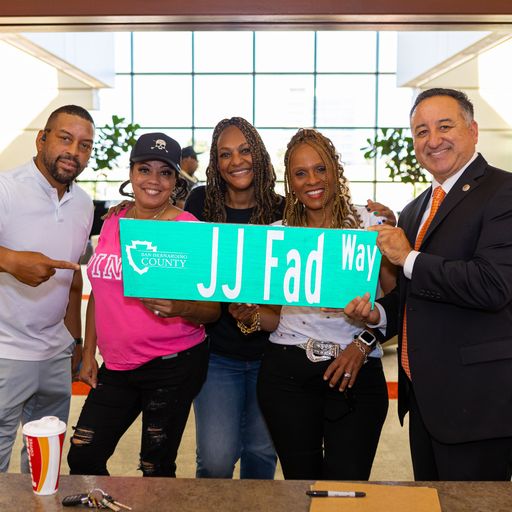 Rialto, CA — JJ Fad, the popular ’80s rap group, has been honored with a street name in its hometown of Rialto.

The group, which was named after the initials of the founders, was originally signed to Ruthless Records which was created by Eazy E, one of the founders of NWA. NWA members Dr. Dre and DJ Yella served as co-producers on JJ Fad’s “Supersonic.”

JJ Fad only had one major hit, which was the song “Supersonic.” The song sold more than 500,000 copies. The group released a follow-up album “Not Just a Fad,” in 1991, but that wasn’t a success.

However, the group saw a resurgence of popularity with the wave of interest in ’80s music and nostalgia tours. “Supersonic” was also sampled by Fergie in her hit song “Fergalicious,” and by underground rapper MF Doom in his song “Hoecakes.” And “Supersonic” was also featured in the trailer for the movie “Sonic the Hedgehog.” Supersonic” is also part of the video game “Dance Central 3.”

The street naming effort was led by San Bernardino County Supervisor Joe Baca Jr. who said he was a fan of the group growing up.

“The members of JJ Fad are supportive community members, and this recognition is in honor of their contributions to our county, especially the Fifth District,” said Baca in a press release. “

“I am so excited to get a street in the Rialto area, where the music group JJ Fad were raised to be renamed in their honor! The street is called J.J. Fad Way and is named after the group who always supported their city no matter how famous and busy they got,” said Baca in a statement. “I would like to thank all who came out, I would like to thank Jesse Duran for emceeing the event, and I would like to thank the members of World Class Wreckin’ Cru and Arabian Prince for coming out and showing support to our girls and our city!”

The group was honored by the recognition.

“What an amazing day! Today we unveiled our very own street sign in the presence of our families, friends, and musical peers! Thank you to our wonderful families for showing up and showing out! The love was felt around the room! JJFAD WAY is here to STAY! Thank you Rialto we will always represent our hometown!” said a message posted on the group’s Facebook page.