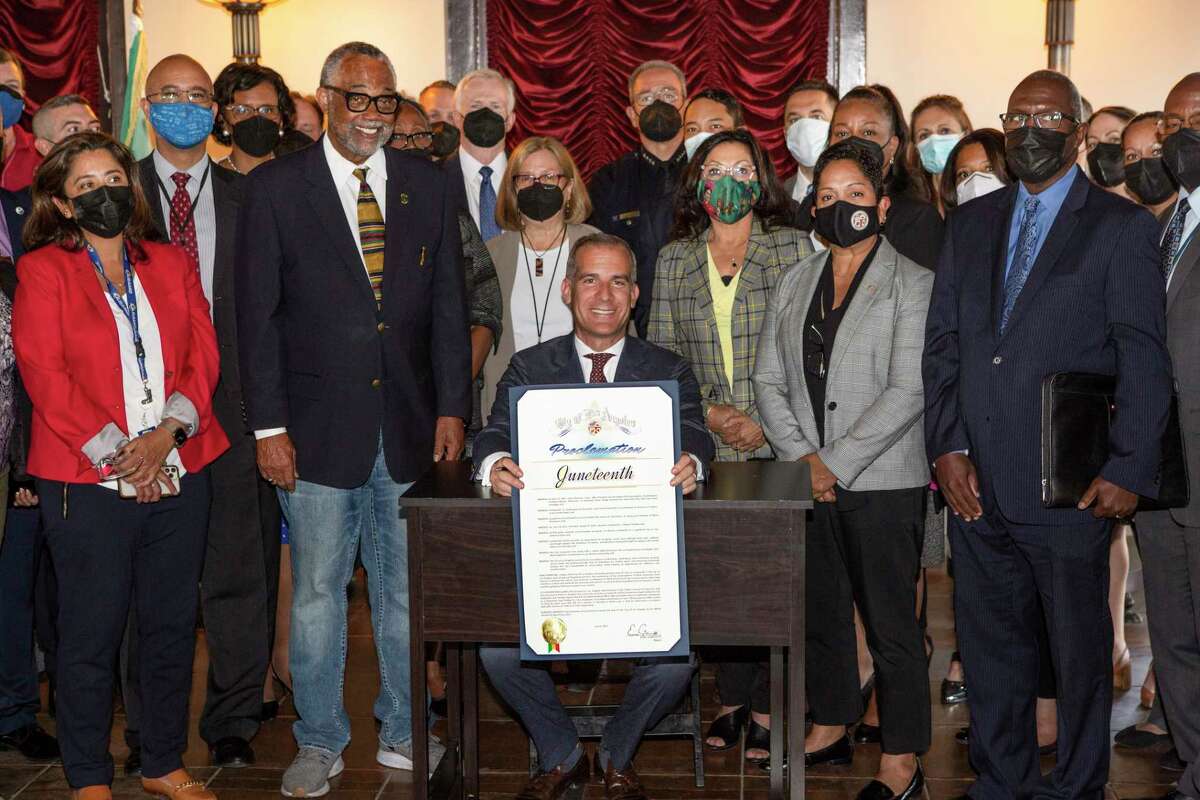 Although President Joe Biden signed a bill declaring Juneteenth a federal holiday last year, cities and states still have the power to decide which holidays they will officially observe.

Mayor Garcetti’s signing is one among many commemorations of Juneteenth nationwide as a growing number of states and municipalities officially honor the historic holiday long celebrated in African American communities across the United States.

“We need every Angeleno to learn the full story of our past, no matter the ugliness of some of its chapters, and that means recognizing the lasting legacy of slavery in our country,” Garcetti said at the signing ceremony.

The holiday is recognition of June 19th, 1865, the day Union soldiers notified enslaved African Americans in Galveston Bay, Texas that they were free under the Emancipation Proclamation.

Two and a half years earlier, enslaved and free African Americans gathered in churches and private homes across the country to mark what was known as “Freedom’s Eve” on Jan. 1, 1863. They were awaiting news confirming that President Abraham Lincoln had signed the Emancipation Proclamation that ended slavery in Confederate States.

Anticipation heightened and celebrations began as the news spread of the 13th Amendment, the constitutional modification that established the abolishment of slavery. Union soldiers began their march to spread the news throughout plantations and cities in the South.

However, not everyone in Confederate territory would immediately be free. Even though the Emancipation Proclamation was signed into law in 1863, it could not be implemented in places still under Confederate control. As a result, in the westernmost Confederate state of Texas, enslaved people would not be free until much later.

In Galveston Bay, freedom finally came on June 19, 1865, when some 2,000 Union troops arrived. The army announced that the more than 250,000 enslaved black people in the state, were free by executive decree. That momentous day came to be known as “Juneteenth,” by the newly freed people in Texas.

On May 19, California State Senators Steven Bradford (D-Gardena) and Sydney Kamlager (D-Los Angeles) introduced Senate Concurrent Resolution (SCR) 109, which would recognize Juneteenth an official holiday statewide this year. Nine other members of the California Legislative Black Caucus are co-sponsors of the resolution.

For the past three years, Gov. Newsom has issued Juneteenth proclamations commemorating the holiday and declaring it “Juneteenth National Freedom Day: A Day of Observance” in the State.

SCR 109 urges “the people of California to join in celebrating Juneteenth as a day to honor and reflect on the significant role that African Americans have played in the history of the United States and how they have enriched society through their steadfast commitment to promoting unity and equality.”

“By making Juneteenth an official state holiday, California would demonstrate its commitment to celebrating the emancipation of all slaves,” Assemblymember Akilah Weber (D-San Diego) said in a statement.

“Juneteenth is an important and special annual celebration for Black culture, resilience, and achievement,” Weber continued. “Designating this date as a paid state holiday mirrors the federal holiday commemorating the end of slavery in the United States.”

A Snapshot of Juneteenth Events in California

Here are a few highlighted Juneteenth 2022 events in California.

JUNETEENTH: A DAY OF REMEMBERANCE

From 12: 30 p.m. to 2 p.m. on Monday, June 20, the California Legislative Black Caucus will hold will host a lunch celebrating Black freedom with family, friends, food trucks, and more festivities. The CLBC is calling on all Californians to support AB 1655, which will permanently make Juneteenth a state holiday in California.

Sacramento Juneteenth Incorporated will produce this year’s festival June 17-19, 2022, in William Land Park. This year’s theme will focus on systematic economic injustices. They will partner with several local organizations to highlight and expose the systems and laws that perpetuate the continued economic injustices inflicted on communities of color. Events include a gospel concert, live entertainment, vendors, and more. You can find more Sacramento Juneteenth events here

Leimert Park Rising is a collaborative effort to build a more cooperative Leimert Park Village through arts, culture and commerce. Taking place from noon to 8 p.m. on June 19-20, the annual Juneteenth Celebration is a family friendly event for all ages with craft vendors, food trucks, and multiple stages featuring live music and DJs. Free admission.

You can find a more comprehensive list of Juneteenth events in the Los Angeles area here.

Juneteenth-in-Berkeley, held annually in June on Father’s Day, in south Berkeley’s five-block Alcatraz-Adeline corridor has been produced by Berkeley Juneteenth Association, Inc., a non-profit, serving the community since 1986. They rebranded as Berkeley Juneteenth Cultural Celebrations to pursue and sponsor more cultural events throughout the year. You can find more Juneteenth events here.

JUNETEENTH A Summer Celebration of Culture

Community Actor’s Theatre and Common Ground Theatre two of San Diego’s most prestigious African American Theatres are hosting this majestic outdoor event at the Jacob’s Center in Market Creek Plaza. Come out and treat yourself to a time filled with history music dancing story telling reflection vendors and physical art on display! All Are Welcome! You can find more San Diego Juneteenth events here.

“Come out and Celebrate Juneteenth Celebration of Freedom, we will have vendors, live performances, speakers, kids’ zone, spade and domino tournaments, food vendors, cook offs, resources and much more. This will be a one-of-a-kind Juneteenth event to hit our city, we are going educate the community on the history of Juneteenth and its origins, make sure you come out you do not want to miss this event. This is a free event. A day of fun and entertainment.”

Art enthusiasts and community-based organizations in Oxnard are marking Juneteenth this year with a two-day event celebrating art and artists while promoting financial freedom.

Artist Milton “510” Bowen, an Oakland native, is headlining the festival that will be held at various locations in Ventura County’s largest city, about 60 miles north of Los Angeles.

“As we strive to celebrate and honor the diversity of all Contra Costa County cities and their history, Juneteenth is a celebration to be held with as much respect as 4th of July celebrations go forth. Last year, we hosted an amazing event in the historic Waldie Plaza in Antioch that consisted of a full program with entertainment and speakers from throughout our community, and an array of vendors including a full COVID Vaccine clinic by Kaiser Permanente. The event was a success, and we are now looking to continue to grow the event.”