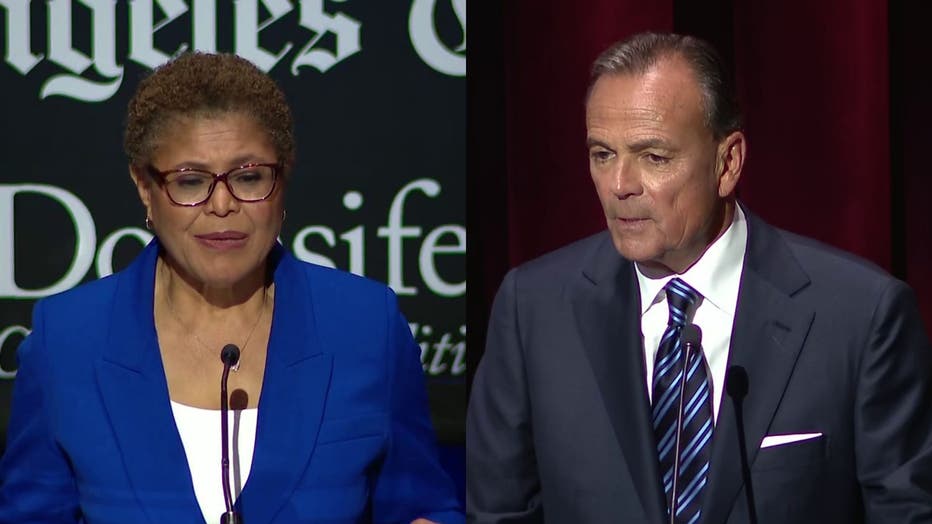 The Los Angeles mayoral race has come down to two candidates. Billionaire developer Rick Caruso and U.S. Rep. Karen Bass finished on top of a crowded primary field. Since neither candidate attained 50% of the vote, they will go to a runoff in November.

However, the candidates are as different as can be. Caruso is a former Republican, who only became a Democrat because it was difficult for a red candidate to win in a blue city. Also, Caruso used his personal fortune to raise his profile. He spent an estimated $40 million on the campaign. Much of that went to a huge advertising buy which blanketed television with attack ads focused on Bass.  Bass, a veteran politician who worked her way up the ladder, had a much smaller war chest.

Caruso finished narrowly ahead of Bass in the primary. And he has also drawn celebrity endorsements from the likes of rapper Snoop Dogg and actress Gwyneth Paltrow. The attack ads portrayed Bass as part of the corrupt Democratic establishment and Caruso as a reformer who could solve L.A.’s homeless problem.

The city has the second largest homeless population in the country, which stands at 66,000 according to the Los Angeles Homeless Services Authority. The problem has become increasingly glaring with homeless people setting up camps under bridges, which makes L.A. look like a shantytown.

According to a Politico article, Bass is not without resources. She tapped into a Democratic super PAC that spent about $1.2 million on anti-Caruso ads.

One ad called Caruso a fraud and compared him to former President Donald Trump.

According to Los Angeles-based political analyst Earl Ofari Hutchinson, Caruso’s fortune is a strength and a weakness.

Hutchison added that while Caruso portrays himself as a reformer who’s going to fix the homeless problem, his business practices are part of the reason many people are living on the streets.

“Caruso is a billion-dollar developer. His sole interest is in corporate, office and high-end income residential development projects,” he said. “It’s this runaway corporate development that has been one of the major causes of the homeless crisis in L.A.–namely destroying housing and rental affordability. He can’t fix what he has done much to contribute to.”

Caruso, who has never held elective office, may have a hard time keeping his campaign promises once he has to deal with city government, and a city council.

“Caruso will be faced, of course, with the homeless crisis, the continuing problem of LAPD accountability, and L.A.’s monster traffic glut. His answer of more police and development will simply add to the problems,” said Hutchinson.

According to Hutchinson, Caruso is also supported by the Los Angeles Police Protective League (PPL.) But he pointed out that well-funded campaigns have lost in the past. For example, Meg Whitman, former CEO of eBay, lost to veteran politician Jerry Brown in the 2010 gubernatorial race. Whitman was also a billionaire and funded her own campaign.

Hutchinson also said fixing homelessness is a complex problem. “It will take a multi-pronged approach a massive expansion of–affordable housing and shelter, drug and alcohol counseling and support services, family support services, job skills and training programs, and intense monitoring of these programs to make sure they are functioning properly to make any appreciable dent in the homeless crisis,” he said.

Bass, who was worked her way up the ladder from community organizer to speaker of the California Assembly and serving in the House of Representatives, is better suited for the job, according to Hutchison.

“She brings two crucial skills to the mayor’s job. The first is her Washington experience and ties. This is key to ensuring continued major funding for L.A.’s needs and projects,” said Hutchinson. “The second is she was a long-time community organizer. She understands the chronic needs and problems of underserved, lower-income Black and Brown communities.”