In a Big Jan. 6 case, Oath Keepers Go On Trial for Seditious Conspiracy 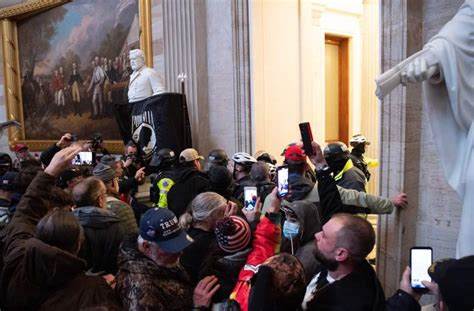 WASHINGTON, D.C. In the highest-profile prosecution so far stemming from the Jan. 6 attack on the U.S. Capitol, the founder of the Oath Keepers and four others individuals linked to the far-right, anti-government group go on trial Tuesday on seditious conspiracy and other charges stemming from the deadly assault.

Stewart Rhodes, who established the Oath Keepers in 2009, and his co-defendants are accused of spending months recruiting, training and conspiring to use force to prevent the transfer of presidential power to Joe Biden. Prosecutors allege the plot included stashing guns just outside Washington, D.C., for a quick reaction force to rush into the city on Jan. 6, if necessary.

The trial, which is expected to last around five weeks, opens Tuesday with jury selection at the federal courthouse just down the street from the Capitol. The stakes are high for both sides.

For the defendants, a conviction for seditious conspiracy alone carries a maximum sentence of 20 years in prison.

For the government, a failure to win convictions in the most consequential Jan. 6 prosecution so far — particularly on the central charge — would undermine the Justice Department’s assertion that the Capitol attack posed a uniquely dangerous threat to American democracy.

Rhodes and 10 members or associates of the Oath Keepers are charged with seditious conspiracy, obstruction of an official proceeding and other crimes in connection with the Capitol attack.

Two of the 11 people indicted in the case — Brian Ulrich and Joshua James —have pleaded guilty to seditious conspiracy and are cooperating with the government. The remaining nine defendants are to face trial in two groups.

The first group is headlined by Rhodes, a former Army paratrooper and Yale Law School graduate who was later disbarred. He’s joined by Kelly Meggs, Kenneth Harrelson, Jessica Watkins — all of whom have been in custody since their arrest — as well as Thomas Caldwell.

The second group of defendants is scheduled to stand trial in November.

Five leaders of the Proud Boys extremist group separately also have been charged with seditious conspiracy.

Prosecutors say Rhodes and his co-defendants began plotting shortly after the 2020 election to use force to block Biden from taking office.

Much of the government’s case is built on text messages the defendants sent each other between November 2020 and January 2021, as well as financial records and video footage from Jan. 6.

Just two days after the presidential election, for example, Rhodes sent a message to an Oath Keepers chat on an encrypted messaging app urging his followers not to accept the election results, according to the indictment.

“We aren’t getting through this without a civil war,” Rhodes allegedly wrote. “Too late for that. Prepare your mind, body, spirit.”

The indictment says that on Nov. 9, 2020, Rhodes spearheaded an online meeting with Oath Keepers, including at least four of his co-defendants, in which he outlined a plan to stop the transfer of power, including by use of force.

From there, prosecutors say, various members of the alleged conspiracy began recruiting, holding training sessions and coordinating their activities.

In a Dec. 11 message cited in the indictment, Rhodes allegedly told others in a group chat that if Biden were to take office, “it will be a bloody and desperate fight. We are going to have a fight. That can’t be avoided.”

After Trump announced a big rally in Washington, D.C., on Jan. 6, the day Congress was meeting to certify the Electoral College vote, Oath Keepers focused their attention on mobilizing for the event.

The indictment says Rhodes purchased thousands of dollars worth of guns and tactical gear, including a shotgun, scope, sights and night-vision devices.

By Jan. 5, 2021, the alleged conspirators had transported weapons, ammunition and other items to the Washington, D.C., area, and stashed them at a hotel in Virginia to be used by quick reaction forces, or QRFs.

On the morning of Jan. 6, Rhodes messaged the others: “We will have several well equipped QRFs outside DC. And there are many, many others, from other groups, who will be watching and waiting on the outside in case of worst case scenarios.”

Later that day, the defendants descended on the Capitol along with the crowd of Trump supporters. Videos show several of the alleged conspirators decked out in tactical gear move up the Capitol steps in a military-style stack formation and enter the Capitol.

Meggs, Harrelson and other defendants allegedly went in search of House Speaker Nancy Pelosi. Watkins and others joined rioters pushing a police line defending the Senate.

Rhodes did not enter the building, but prosecutors say he stood outside and remained in communication with those inside, and met with them on the Capitol grounds after they exited the complex.

In the days that followed, the indictment says Rhodes returned to Texas, and spent thousands of dollars on firearms and tactical gear. Around Jan. 20, when Biden was inaugurated, Rhodes messaged others to “organize local militias to oppose” the Biden administration, according to prosecutors.

Some of them have argued that they traveled to Washington, D.C., on Jan. 6 to provide security for VIPs, or to protect rally-goers from anti-fascist protesters, or antifa. The QRFs, in their telling, were to be called upon if Trump supporters came under attack.

Rhodes has also argued in court proceedings that the defendants’ discussions and planning were all in preparation for Trump to invoke the Insurrection Act.

Rhodes’ attorneys point to his public statements in the lead-up to Jan. 6 urging Trump to invoke the act and call upon militias for support.

“What the government contends was a conspiracy to oppose United States laws was actually lobbying and preparation for the President to utilize a United States law to take lawful action,” James Lee Bright and Phillip Linder said in a court filing.

The government disagrees. Prosecutors argue that the defendants are using the Insurrection Act as legal cover, and that they were ready to act on Jan. 6 whether Trump invoked the act or not.

What is seditious conspiracy?

But this trial is different because of the defendants — most notably the founder of one of the country’s largest anti-government self-styled militia groups — and because of the central charge of seditious conspiracy. It is defined in federal code as two or more people conspiring to overthrow or destroy by force the United States government, or to prevent, hinder or delay the execution of any U.S. law.

The government has rarely used the Civil War-era charge, in part because of the political and symbolic weight that comes with an accusation of trying to overthrow the government.

In the cases the government has brought over the years, federal prosecutors have had mixed success.

The last time was in 2010 with members of the far-right Hutaree militia in Michigan. Ultimately, the judge dismissed the case after finding insufficient evidence of a conspiracy. In that case, attorneys for the Hutaree defendants said there was no plan and no action was taken. The alleged conspiracy, they argued, was nothing more than hot talk.

That stands in contrast to the Oath Keepers case, where several of the alleged conspirators forced their way into the Capitol and disrupted Congress’ certification of the Electoral College count.