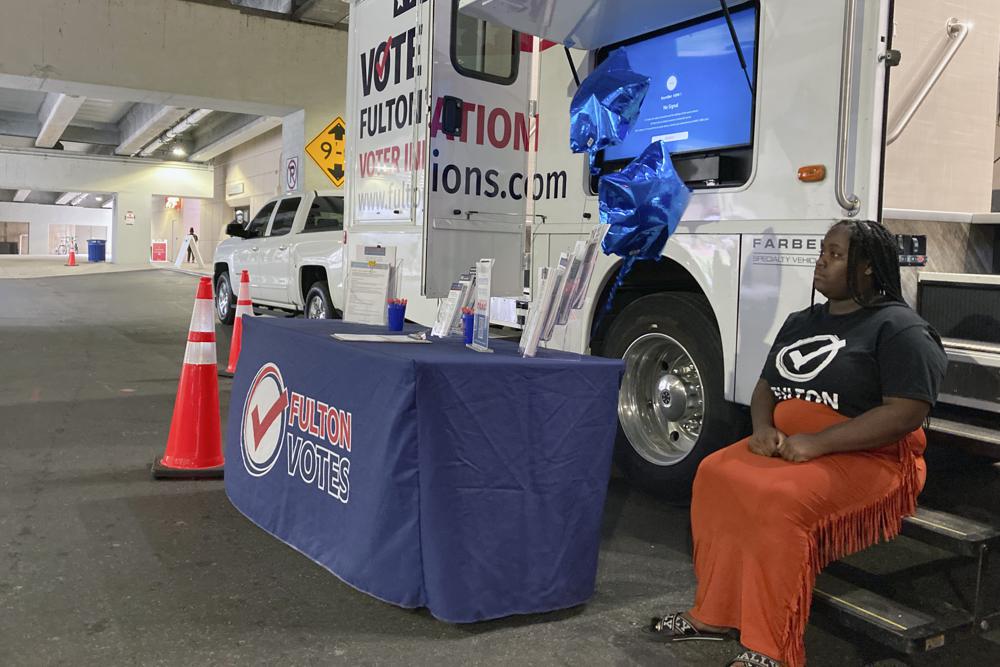 By SUDHIN THANAWALA and GARY FIELDS

ATLANTA (AP) — Rhonda Briggins spent much of Election Day in 2020 at an Atlanta polling place handing out water and snacks to encourage voters to stay in an hourslong line to cast their ballots, something her historic Black sorority has done for decades in Georgia.

This election, Briggins and some of her thousands of sorority sisters are trading that role for a potentially more contentious one: ensuring voters aren’t disenfranchised by a slew of new voting restrictions passed by the Republican-led Legislature. They include a ban on giving food and drinks to waiting voters.

The law, which a federal judge allowed to go forward this election cycle, was too confusing for the sorority to take a chance doing its traditional ”line relief,” said Briggins, chair of the Delta Sigma Theta Strategic Partnerships Task Force and a member of the sorority’s Decatur alumnae chapter.

“The line between criminalization and being helpful is too close,” she said. “We don’t want to get to that point.”

Georgia is one of several states where voters will face new hurdles to casting a ballot during the November election under laws passed by Republican-led legislatures following former President Donald Trump’s false claims that voter fraud cost him reelection in 2020. The restrictions have prompted groups that assist voters to reorient themselves so they can avoid running afoul of new barriers.

They anticipate confusion and conflict at the polls, and are redoubling efforts to register and educate voters.

Since 2021, lawmakers in 21 states have passed at least 42 restrictive laws, according to an analysis by the Brennan Center for Justice. At least 33 of those are in effect for this year’s midterms. Some include multiple changes, such as legislative packages in Georgia and Texas. Others, as in Arizona, are less expansive or in some cases not yet applicable.

The 98-page bill in Georgia contained dozens of changes to state voting law. They include shortening the time to request a mail ballot, rolling back the pandemic-driven expansion of ballot drop boxes and reducing early voting before runoff elections.

The state had argued that the water and refreshment ban was necessary to protect against the potential for illegal campaigning or vote-buying. State lawyers also argued that it was too close to the upcoming election to make changes.

“Again, we’re not telling anybody who to vote for,” Briggins said of the assistance the sorority offered in previous years. “We’re offering water because you have been in line eight hours.”

Faith Works, a group organized by Black church leaders in response to the Georgia law, is providing grants to help more than 1,000 churches mobilize voters. It also aims to deploy 200 chaplains around the state to defuse any tension at polling sites.

Bishop Reginald Jackson, who presides over more than 500 African Methodist Episcopal churches in Georgia and helped create the group, blasted the new law as an attempt to suppress Black voters after they helped Democrats win the presidential contest in Georgia two years ago for the first time since 1992.

“It’s designed and intended to be a punishment to Blacks for turning out to vote in such large numbers in 2020,” he said.

Republicans have pushed back on the criticism that their new law limits voting, noting that it also expands weekend early voting.

Voting rights groups in Georgia and elsewhere are adapting to the altered landscape. In Arizona, Mi Familia Vota is focused on voter education, including letting people know that a law passed this year requiring proof of citizenship to register to vote in federal elections is not in effect this cycle.

That provision is expected to affect Latino voters heavily, in part because one element of the law requires local election officials to notify prosecutors if a would-be voter doesn’t provide proof of citizenship and the state election officials can’t find proof in various government databases.

“It is part of a continuation to make it harder for people to vote,” said Hector Sanchez Barba, executive director of Mi Familia Vota. His group joined the U.S. Department of Justice in filing a court challenge to the law.

A sweeping law pushed through the GOP-controlled Texas Legislature in 2021 led to thousands of ballot rejections during the state’s March primary, according to an analysis by The Associated Press.

Texas Secretary of State John Scott said one county largely avoided rejections by including an insert with instructions on how to fill out the mailed ballot and its return envelope. He said the practice has since been suggested to every county.

The Texas Civil Rights Project, a nonpartisan group that challenged the new law, spent much of a recent training session for lawyers on the law’s mail ballot identification requirement and the greater difficulty the law creates for removing problematic poll watchers.

“There’s only one way to fix this — educate, educate, educate,” Cummings said. It’s a theme picked up by other groups such as MOVE Texas, which held over 60 events in the state on voter registration day, all targeting younger, would-be voters.

Georgia’s Senate Bill 202 — signed into law last year by Republican Gov. Brian Kemp — was one of the first voting measures passed after Trump’s defeat. In addition to making it a misdemeanor to hand out food or drinks to any voter standing in line, the law limits voters’ ability to cast a provisional ballot if they go to the wrong precinct. It also allows any Georgia voter to challenge the eligibility of an unlimited number of other voters within the same county.

Elections offices already have fielded challenges to the eligibility of thousands of voters in metro Atlanta.

The New Georgia Project, a group founded by Democratic gubernatorial candidate Stacey Abrams, has trained legal professionals to fight any baseless attempts to disqualify voters, accost them for handing out water or wrongly deny them the right to cast a provisional ballot, said Aklima Khondoker, the group’s chief legal officer.

Khondoker said the group will be “hypervigilant about election administration issues, disenfranchisement, criminalization of both voters and everyday good volunteerism activities.”

The Georgia Coalition for the People’s Agenda, another group that aims to increase access to the polls, helped organize information sessions about the new law in Savannah, Macon, Augusta and other cities over the summer. The group bought scanners so people could copy bank statements or other forms to request an absentee ballot if they didn’t have a driver’s license or state-issued identification card, said Helen Butler, the group’s executive director. SB202 replaced signature verification for absentee ballots with an identification requirement.

The community organizing group Georgia STAND-UP will host block parties near some voting precincts so people can get water and food before they get in line to vote, CEO Deborah Scott said. The group plans to use tape measures to make sure the events are more than 150 feet (46 meters) from the precinct to comply with the new law.

Rev. Timothy McDonald, III, senior pastor of Atlanta’s First Iconium Baptist Church and another leader of Faith Works, recently led a brainstorming session that included a discussion about how to counter voter challenges. McDonald urged the groups in the room to publicize a voter protection hotline and said voters should bring a utility bill with them, in addition to their identification, to verify their address.

“There’s going to be some shenanigans on that day,” he warned.