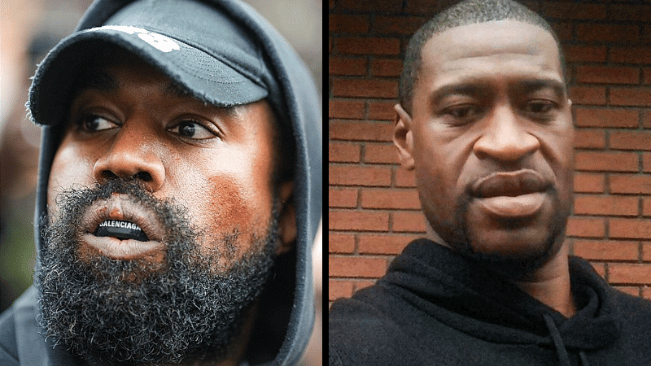 *The family of George Floyd is considering legal action against Kanye West after the rapper spread the false claim that George died of a drug overdose.

West appeared on Revolt’s “Drink Champs” newest podcast and spoke about Candace Owens’ new documentary on Floyd titled “The Greatest Lie Ever Sold.” During the conversation, he alleged that Floyd died after getting high on the drug fentanyl—saying, “They hit him with the fentanyl. If you look the guy’s knee wasn’t even on his neck like that.”

Floyd was murdered by members of the Minneapolis Police Department on May 25, 2020. He was killed outside of a convenience store by officer Derek Chauvin, who knelt on Floyd’s neck for roughly 9 1/2 minutes until he lost consciousness and died.

Chauvin was ultimately convicted on state charges of second-degree unintentional murder, third-degree murder, and second-degree manslaughter as well as federal civil rights offenses for killing Floyd. He was sentenced to 21 years in prison.

On Sunday, civil rights attorney Lee Merritt hit up Twitter to respond to Ye’s controversial “Drink Champs” appearance. Merritt, who has represented the Floyd family, slammed the hip-hop star for his “false statements” about the manner of Floyd’s death.

“While one cannot defame the dead, the family of #GeorgeFloyd is considering suit for Kanye’s false statements about the manner of his death,” he tweeted. “Claiming Floyd died from fentanyl not the brutality established criminally and civilly undermines & diminishes the Floyd family’s fight,” Merritt added.

Merritt told CNN that Floyd’s brother, Philonise Floyd, wants to pursue a defamation suit against Ye but the outlet notes that it is “not legally possible because George Floyd is deceased, Merritt said, there are other legal avenues to pursue, including the Floyd family possibly suing for intentional infliction of emotional distress,” writes CNN.

Meanwhile, Dr. Martin Tobin, an expert pulmonologist and critical care physician, testified during Chauvin’s trial that Floyd died from a lack of oxygen due to the positioning of his body when Chauvin had Floyd cuffed and pinned to the ground with his knee.

In related news, former NBA player Stephen Jackson, a friend of Floyd, posted a video in response to Kanye’s remarks. Check out what he had to say in the Instagram video below.