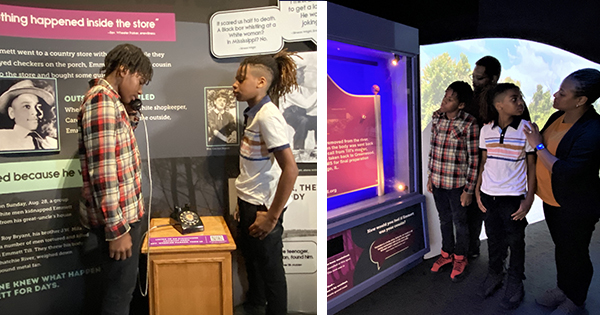 Nationwide — Three years in the making, the Emmett Till & Mamie Till-Mobley: Let the World See exhibit has made its national debut at The Children’s Museum of Indianapolis and runs through October 30, 2022. It will then make a historic tour across the United States traveling to the Birmingham Civil Rights Institute in Alabama, Martin Luther King, Jr. Memorial Library in Washington, DC, Two Mississippi Museums in Mississippi, DuSable Museum of African American History in Illinois, Atlanta History Center in Georgia and National Civil Rights Museum in Tennessee before reaching its permanent destination at the Emmett Till Interpretive Center in Sumner, Mississippi. This historic exhibit is recommended for ages 10 years old and older.

“Learning more about Emmett Till’s story is difficult, but I believe it’s crucial for families to understand what happened during the cruel and senseless tragedy to help people heal from prejudice and discrimination and to prevent senseless acts of violence today,” said Jennifer Pace Robinson, President and CEO, The Children’s Museum of Indianapolis.

Families will also learn how two of Emmett Till’s murderers were tried & found not guilty in just 67 minutes by an all-White, all-male jury—despite eye-witness testimony from Emmett’s great uncle, Moses Wright. His murderers later confessed and were paid $4,000.00 for their story by Look magazine.

Facilitators within the exhibit will share conversation starters to help families understand what happened during the Jim Crow era and reflect. There is also a Building Bridges workshop that will guide visitors to turn a fence into a bridge—symbolizing ways to break down racial barriers. An actor lead performance will feature a social justice educator and their reflection on the negative response they received after sharing Emmett Till’s story with students.

“Let the world see what they did to my boy,” are the heart-wrenching words spoken by Mamie Till-Mobley who insisted upon an open casket for her 14-year-old son who was brutally tortured and murdered for whistling at a White woman in Money, Mississippi in 1955.

It all started in August of 1955. Fun-loving, Emmett Till could hardly wait to visit family in Mississippi. The 14-year-old grew up near Chicago and had never ventured far from home. After stern warnings from his mother about racism and social etiquette in the South, he took a summer trip to visit relatives in Mississippi with his great uncle and cousin, Wheeler Parker. That trip and a visit to the local store changed their lives forever. “They came out of the store and Emmett loved to make people laugh – telling people jokes. He wolf-whistled right there in front of the store and we could have just died,” said Rev. Wheeler Parker Jr., Emmett’s cousin. Later, the husband and brother-in-law of the woman who Emmett whistled at, abducted 14-year-old Emmett from his Great Uncle Moses’s home in the middle of the night. “I heard them coming. In walked this guy- his name was Milam,” said Parker. “He had a pistol in one hand and a flashlight in the other. I was shaking, literally shaking like a leaf on a tree.”

This is just one of the memories you’ll hear from the last surviving eyewitness to the kidnapping and the subsequent brutal murder of Emmett Till. The Emmett Till & Mamie Till-Mobley: Let the World See (EmmettTillExhibit.org) exhibit created by the Till family, Emmett Till & Mamie Till-Mobley Institute, Emmett Till Interpretive Center, and The Children’s Museum of Indianapolis will travel to seven cities before being permanently displayed steps away from where the trial for his murder took place in the Second District Tallahatchie County Courthouse in Sumner, MS. The exhibit shares how a mother’s bravery and fight for justice more than six decades ago fueled the Civil Rights Movement in America. When Emmett’s body arrived in Chicago, his mother insisted on an open casket so the world could see the ugly face of hatred and racism.

Historic markers installed near the Tallahatchie River (acknowledging where Emmett Till’s lifeless body was recovered) have been continually stolen, shot at, and vandalized. One sign made headlines after a group of students from the University of Mississippi posed in front of it with rifles and then posted their photo on Instagram in March of 2019. That shot-riddled sign will be on display to show that racism continues today as people try to destroy the memory of what happened to 14-year-old Emmett Till.

Rev. Wheeler Parker wants people to know, “History is history. It’s not who we are today. What matters is what we choose to do about it today. So what are you going to do?”

Executive Director of the Emmett Till Interpretive Center, Patrick Weems, hopes it means people will take positive action, “Despite the repeated vandalism of these signs, our community has united again and again to replace them to tell the truth about what happened to Emmett Till. We believe that telling the truth about these acts of violence and injustice is the first step toward racial healing. These vandalized signs show just how much further we have to go to combat racism in our country.”

Learn more about Emmett Till Historic Landmarks as part of the Civil Rights Trail and historic sites.

After 100 years and 200 failed attempts, a bill named the Emmett Till Antilynching Act was finally passed in March 2022. It criminalizes lynching and makes it punishable by up to 30 years in prison. Exhibit developers hope visitors will feel empowered to stand up against racial violence and to make a difference in their own communities.

Rev. Wheeler Parker’s memoir: “A Few Days Full of Trouble” published by Random House, to be released January 10, 2023, tells the story of his friendship and his search for justice for his cousin and best friend, Emmett Till.

To learn more about the Emmett Till story, watch the ABC mini-documentary series called, “Let the World See”.

This project was made possible in part by The National Endowment for the Humanities: Democracy demands wisdom, the Maddox Foundation in Hernando, MS, The Institute for Museum and Library Services [MH-249226-OMS-21], and The Historic Preservation Fund administered by the National Park Service, Department of the Interior [15.904]. The Children’s Museum of Indianapolis is proud to partner with Riley Children’s Health, Old National Bank, Ice Miller LLP and the Heritage Group.

About the Emmett Till & Mamie Till-Mobley Institute

The Emmett Till and Mamie Till-Mobley Institute, a non-profit organization, is engaged in research and social justice advocacy. We are dedicated to preserving the memory and historical significance of the life and death of Emmett Louis Till, and preserving the social action legacy of his mother, Mamie Till-Mobley, to foster educational opportunities and civic engagement among youth. Our focus is on funding research, education and public programs aimed at encouraging enlightened participation in the democratic process and working to build and maintain a civil society. For more information about the Till Institute, visit www.tillinstitute.org.

About the Emmett Till Interpretive Center

The Emmett Till Interpretive Center was formed to confront the brutal truth of the 1955 murder of 14-year-old Emmett Till in the Mississippi Delta and to seek justice for the Till family and Delta community. The Center aims to tell the story of Emmett Till and his mother, Mamie Till-Mobley, as an act of restorative justice to create the conditions necessary to begin the process of racial healing in Mississippi and across the nation.

About The Children’s Museum of Indianapolis

The Children’s Museum of Indianapolis is a nonprofit institution committed to creating extraordinary learning experiences across the arts, sciences, and humanities that have the power to transform the lives of children and families. For more information about The Children’s Museum, visit www.childrensmuseum.org, follow us on Twitter @TCMIndy, Instagram@childrensmuseum, YouTube.com/IndyTCM, and Facebook.