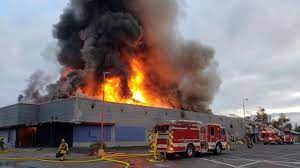 The San Bernardino Fire Department reported a fire on Sunday, Oct. 3, that damaged an office building in the 100 Block of E. Hospitality Lane.

According to a press release, the damage came from a vegetation fire. Several units responded to the fire.

Firefighters evacuated occupants of the building.

“Despite firefighter’s best effort the wind-driven fire quickly spread to other nearby trees, an outbuilding and the attic space of the 35,000 square foot office building,” according to the press release. “Windy conditions continued to fuel the fire, challenging arriving fire crews. Despite their best efforts, the fire continued to grow through the large office complex.”

“Climate change, primarily caused by the burning of fossil fuels, is increasing the frequency and severity of wildfires not only in California but also all over the world. Since 1950, the area burned by California wildfires each year has been increasing, as spring and summer temperatures have warmed and spring snowmelt has occurred earlier,” said the site. “Of the 20 largest fires in California’s history, eight have occurred in the past three years (since 2017). The ongoing August Complex Fire is now the largest recorded wildfire in California, surpassing the 2018 Mendocino Complex Fire.”

The California Air Resources Board also stated that about one-quarter of the state is now under “very high or extreme fire threat.”

A 2016 Environmental Protection Agency factsheet stated that California has warmed by about three degrees in the last century.

Gov. Gavin Newsom has made tackling the effects of climate change a significant part of his platform.

According to his website, the governor has allocated about $9 billion to help communities cope with the effects of climate change and extreme heat and drought.

“We have a deep responsibility to support our communities recovering from wildfires, and that commitment doesn’t end when the world’s attention has moved on. The state will continue to work with federal partners to ensure our resilient communities have the help they need to get back on their feet and rebuild,” said Newsom.