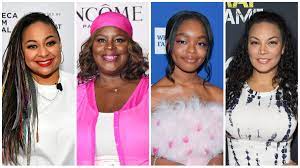 These women will be bringing some much needed Black Girl Magic to the home design front.

There’s about to be some more melanin in this mid-century modern house!

Per a press release sent to The Root, Discovery+ and HGTV are unveiling a handful of new shows in the next year helmed some very familiar faces.

First up is Raven’s Home star and former co-host of The View Raven Symoné, who’ll be hosting the new design spinoff of What Not to Wear, aptly titled What Not to Design. Joined by a team of design experts, namely Nina Ferrer from HGTV’s Design Star and craftsman James Worsham, the one-hour series will follow the trio as they “lead a style intervention to overhaul home design disasters. From homes with outdated, over-the-top decor to ones with out-of-control memorabilia collections, the houses—and the owners—are in for a major change. The team will meet with homeowners and will survey what items to keep, toss and sell online to maximize the budget before the rooms are given complete makeovers.”

What Not to Design premieres Thursday, July 29 at 8 p.m. ET on HGTV.

Next up is Parks & Recreation and Good Girls’ star Retta, who’ll be bringing the funny to some seriously fugly homes. According to press release sent, Ugliest House in America will follow Retta along as she “showcases unsightly homes from coast-to-coast, including failed flips, gaudy design and heinous hodge-podge horrors. Ultimately, the ‘ugliest house in America’ will get a $150,000 renovation, culminating in a showstopping final reveal for the lucky homeowners.”

“I loooove a renovation ‘before and after’ so to have a front row seat from beginning to end in Ugliest House in America is pretty damn exciting, especially since I fancy myself an amateur designer,” Retta said in a statement. “My go-to design recommendations are to add a chandelier and more cabinets for storage, so amateur!”

Ugliest House in America is slated to drop on HGTV early next year.

Black-ish and Little star Marsai Martin will be getting in her bedroom design bag for an upcoming Discovery+ series soon. Serving as both the series host and executive producer (because she’s a young boss like that), the unnamed show will see Martin along with her expert team (aka Joani Sprague and Tiffany Thompson) surprise deserving teens who are making an impact in their respective communities. Per a press release, the eight-episode series will deliver breathtaking bedroom makeovers that are “reflective of each teen’s interests, individuality, personality and style.”

“As a teen, my bedroom is a space where I can be comfortable in my own skin and just be free,” said Martin. “When I walk into my room, I want it to feel like a breath of fresh air. And that’s the goal for my fellow teens who will receive these amazing bedroom makeovers.”

The unnamed series will be available to stream on Discovery+ some time in 2022.