Rising From The Ashes, Jacob’s Pillow Welcomes Back Dancers, Audiences 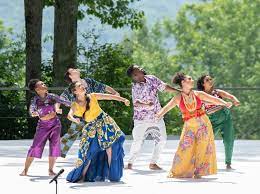 In 1931, modern dance pioneer Ted Shawn purchased a farm in an isolated location in Western Massachusetts, as a retreat for his company. And over the years, Jacob’s Pillow grew into one of the most important incubators of contemporary dance, not just for America, but for the world.

“This festival has never been canceled ever in its history,” says director Pamela Tatge, “not even in World War II.”

But the pandemic forced the festival to go virtual last summer – new dances were created for streaming and the pre-professional school was held on Zoom. “The silver lining of this time has been accessibility, access to Jacob’s Pillow,” Tatge says. “So many people know us, know where we are, will never be able to get here, but were able to reach us online.”

Still, there were layoffs, and a loss of revenue. Then on November 17, 2020, the Doris Duke Theatre, the Pillow’s experimental indoor space, burned to the ground. For 30 years, it had been a place where choreographers could experiment in an intimate setting.

“We had quite a year,” says Norton Owen, the festival’s archivist. “And of course, that’s not unique. Many people had quite a year. But I think our story was particularly difficult. And yet I will say, too, that out of loss comes renewal.”

The Duke will be rebuilt and the mainstage, the Ted Shawn Theatre, is getting a top-to-bottom renovation. So this summer is all about dance on the center’s outside stage – with the mountains as a backdrop – and even around the 220-acre campus.

Dorrance Dance – a tap dancing company that has been coming to the Pillow for the past 10 years – was the first to give live performances this summer. Michelle Dorrance, the MacArthur Fellow who founded the company, says they created a dance piece all over Jacob’s Pillow – in front of an old cabin, in the pub, on a gravel path.

“We love the opportunity to create something that is site specific and something that honors, you know, [the] particular environment,” Dorrance explains. “And for it to be the Pillow and that we were allowed and in fact, encouraged to explore the edges of the campus that we may not had have experienced before, to bring some of the audiences to those places.”

Their week-long residency was challenging: rain cancelled all but one of the company’s regular stage shows. Still, Dorrance says, “We were able to perform that roving performance outdoors every single day. And audiences put up with it. They put on their raincoats and their boots, and they’d come hang with us.”

The next weekend, Contra-Tiempo, an Afro-Latin activist dance theater from Los Angeles, saw many of its performances rained out, as well. Founder and choreographer Ana Maria Alvarez was philosophical. “We haven’t been able to do all the shows that we were planning to do,” she says. “But in some ways, it feels a little bit like Mother Nature being, like, ‘sit down and slow down… you remember the things that we really learned from this year are moving at the speed of community.'” And her company, which hadn’t danced together during the pandemic, took advantage of the down time to hold dance classes in a tent, to continue to build community.

Students returned to the Pillow this summer, as well. There were fewer in attendance, and they were kept in a strict bubble. Nolan Fahey, from Vancouver, was in quarantine, about to start a two-week program in contemporary dance. “It’s a place where you really submerge yourself into dance and art,” he says. “And especially after the whole pandemic and being somewhat deprived of dance and art, it just seems like such a good way to get back into it.”

With only four hundred people allowed to see each outdoor performance, Tatge says she’s made the commitment to create high quality videos of this summer’s shows, and make them available for free, on demand. Of course, she hopes viewers donate to Jacob’s Pillow. Regardless, all the dance companies will receive additional fees for the videos.

“This field has been decimated,” she explains. “It’s going to take years for it to come back, and it’s the role of organizations like Jacob’s Pillow to do what we can to support artists in that recovery.”