Home > National > Derek Chauvin Wants Probation for Murder. First I Was Like, ‘What America Does He Live In?’ Then I Was Like, ‘Oh Yeah’

Derek Chauvin Wants Probation for Murder. First I Was Like, ‘What America Does He Live In?’ Then I Was Like, ‘Oh Yeah’ 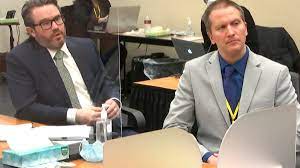 By: Zack Linly, The Root

Like most of white conservative America, Derek Chauvin doesn’t think he’s a criminal. How could he? He’s a cop, a middle-aged white man, and a person with no regard or respect for the dignity and well-being of Black bodies. Derek Chauvin is traditional white America.

If traditional white America was a fly on the wall of Black households, white people might get a glimpse of the looks on our faces when we’re watching or reading news stories about Chauvin and his attorney, Eric Nelson, pleading for Judge Peter Cahill to sentence Chauvin to a term of probation for murder because—wait for it—he’s afraid to go to prison.

This is a prime example of how there are two Americas, and because Black people are accustomed to our America—an America where no part of the justice system gives a fuck about a convicted murderer being scared of prison or a society-deemed criminal not being able to afford quality legal representation—and we are just in caucasity-infused awe of white people who see that same cold treatment as anything other than normal.

Derek Chauvin asked a judge to sentence him to a term of probation or a shorter prison term than suggested by Minnesota guidelines in a sentencing memorandum filed Wednesday. The memo cites Chauvin’s lack of previous criminal history, his previous work as a police officer and the risk he could be victimized in prison as factors the judge should consider as he weighs a sentence.

Nelson said that Chauvin has been “painted as a dangerous man,” but argued that “behind the politics, Mr. Chauvin is still a human being.” He cited Chauvin’s 19-year history with the Minneapolis police department, several on-the-job commendations and the support of his family and friends.

“In spite of his mistakes, Mr. Chauvin has demonstrated that he has a capacity for good and that he has the discipline to consistently work toward worthwhile goals,” the memo reads.

The defense memo says Chauvin, 44, has been diagnosed with heart damage and that he may be likely to die at a younger age like other ex-law enforcement officers. It also says Chauvin may be more likely to be victimized in prison because he was convicted as a police officer, pointing to the fact that he is being segregated from the general prison population before his sentencing over safety concerns. It also says Chauvin has no previous criminal convictions and complied with pre-trial release conditions and court procedures.

I’m not sure where to start.

Maybe I can start with the sheer cauc-irony of Chauvin and his defense team even mentioning Chauvin’s heart condition after Nelson rode George Floyd’s health issues throughout Chauvin’s murder trial, trying to blame Floyd’s death on any and everything besides Chauvin’s motherfucking knee being pressed into the back of his neck for more than nine minutes. You could smell Chauvin’s indifference to Floyd’s physical condition through the camera while watching the video footage of Floyd’s murder.

Maybe I can begin with the defense’s white nonsense about his client being “painted as a dangerous man” by “politics” and not by the video fucking footage that shows him demonstrably being a deadly danger to Floyd and his ability to breathe.

Shit, probably the most obvious place to start is the defense’s characterization of murder as Chauvin having made “mistakes.” I mean, did Chauvin accidentally wear two left shoes and mismatched socks to work on May 25, 2020, or did he fucking kill a man?

Mostly, I’m just thinking about the millions of Black people who have been carted through America’s prison industrial complex—many of whom were also on their first criminal offense and were also scared to death thinking about what might happen to them in prison—and the fact that traditional America rarely if ever considers that each one of them is “still a human being” and that they might also have “a capacity for good” and “the discipline to consistently work toward worthwhile goals.”

I’m thinking about all of the Black people who have had to settle for public defenders because they can’t afford top-notch or even mid-shelf representation and what they might think of a federal judge’s apparent sympathy for Chauvin in assigning Nelson to take on his civil rights case because Chauvin is “financially unable” to hire an attorney to defend him.

Don’t get me wrong—I understand that Nelson is just a lawyer being a lawyer and that it’s part of a defense attorney’s job to reach to all corners of the earth for plausible defenses for their clients, but there’s a larger issue here, and it’s the fact that for criminals of Chauvin’s profile, these defenses are far more likely to work.