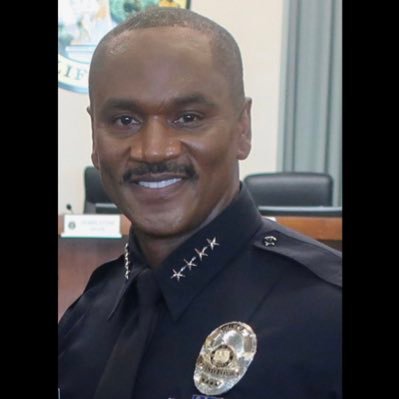 Darren Goodman, who was formerly Upland police chief, will oversee a department with 262 officers and 150 civilian staff, according to city officials.

He starts work in June.

Hardy Brown, cofounder and publisher emeritus of the Black Voice News in Riverside, has monitored police departments in the Inland Valley for nearly 50 years.

Brown says he is excited by Goodman’s appointment, adding that San Bernardino should have appointed its first Black police chief decades ago.

“There have 38 chiefs of police with only one Black ever reaching the rank of Captain, Ted Henson. Two Blacks left San Bernardino to become chiefs in other cities,” Brown explained. ‘

Now that Goodman has been appointed, Brown says, he believes it will take constant monitoring of the department to make sure “he is getting his fair shake.”

“From my experience in implementing historical change such as this, you always have some staff members who resent taking directions from a Black manager,” Brown says.  “I hope and pray that the good officers always speak up to ensure Chief Goodman is treated with respect and fairness.”

Goodman is a law enforcement veteran who has 31 years of service in the field. He worked for 27 years with the San Bernardino County Sheriff’s Department and served as police chief of Chino.

According to San Bernardino officials, the city carried out a nationwide search before selecting Goodman for the position.

“Chief Goodman brings to San Bernardino a wealth of experience, leadership, and knowledge of this region,” said City Manager Robert D. Field. “We are very pleased that he will be joining us.”

Goodman said he accepted the position because he’s familiar with San Bernardino and its challenges.

“During the early years of my career, several of my assignments were in San Bernardino. I am very familiar with the city, many community members, and the high caliber of police officers that work at the San Bernardino Police Department. I am not oblivious to the challenges the city has had in the past, but I believe in the potential of San Bernardino,” he said.

People who know Goodman, or have worked with him, praise his commitment to fairness and facts. A City of San Bernardino press release describes his law enforcement leadership style as focused on “data-driven policing principles, civic partnerships and community engagement.”

Goodman has a Bachelor of Science degree from Southern Illinois University, a master’s degree in Public Administration and doctorate in Education in Organizational Change and Leadership from USC.