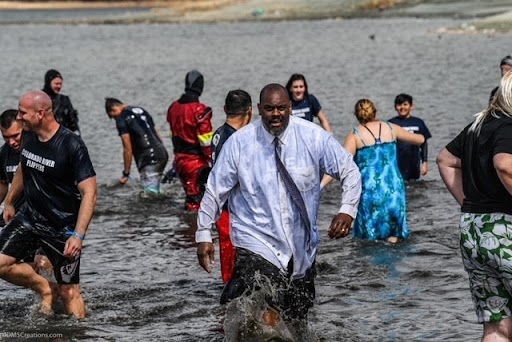 A San Bernardino social worker has raised money for Special Olympics by plunging into freezing water every year. Lae Freeman, a social worker with San Bernardino County Children and Family Services, joined several other swimmers who recently entered the water at Big Bear Lake as part of the Polar Plunge.

“The Polar Plunge is a unique opportunity for individuals, organizations, and anyone to support persons with intellectual disabilities by running, walking or dancing into the chilly waters at Big Bear Lake,” according to the organization’s website.

Freeman braved the elements for a good cause. He is raising money for Special Olympics programs in the Inland Empire. This is his seventh year of taking part in the Polar Plunge, and he has raised more than $15,000. This year, he has already raised more than $4,000.

According to Polar Plunge’s website, Freeman is the top fundraiser.

“For me, this is important because there are a lot of children and adults with intellectual disabilities that count on Special Olympics for enjoyment, socialization, and self-esteem,” said Freeman in a press release.

Freeman’s Polar Plunge fundraising activity is part of his commitment to serving children.

All the money Freeman raises goes to a good cause.

“All Special Olympics programs are free to the athletes and their families. For most families, participation in sporting organizations would be financially impossible,” said Calvin Lyons, president and CEO of Special Olympics Southern California. “The Big Bear Polar Plunge helps to provide year-round sports training and athletic competition for children and adults with intellectual disabilities.”