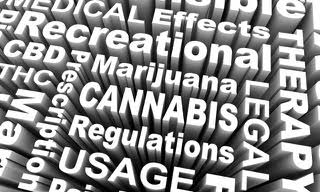 Alphonso “Tucky” Blunt, owner of a marijuana product store in Oakland called Blunts and Moore, says his business is located in the same zip code where he was arrested for selling weed illegally in 2004.

Now that he is legit in the business – he opened his store in a little over three years ago– Blunt says it is nearly impossible for Black and other minority-owned cannabis startups like his to make a profit in California.

“Where’s the tradeoff? I’ve been in the business for a few years and I’m still in the red. California has one of the highest tax rates on cannabis businesses anywhere. Oakland is in the top four of anywhere in the country,” said Blunt. “We also pay the most for armed guards. It costs like $25 to $30 per hour. The city requires us to have them – unlike Berkeley where they are not required. But police respond faster there.”

Blunt says the challenges cannabis businesses in the state face are many, including the fact that they have to pay federal taxes but can’t write off any expenses because cannabis is not legal on the federal level. Businesses like his also have challenges banking because of federal restrictions. Plus, criminals frequently target cannabis businesses and when they do, insurance companies are typically unwilling to pay for damage or lost products, Blunt says.

To address some of the challenges minority entrepreneurs in the industry are facing – particularly those who were victims of the War on Drugs – legislators in California have taken a number or steps to lower barriers to entry in the industry.

“There is no doubt that the War on Drugs has disproportionately harmed people of color and their communities,” said Sen. Steve Bradford (D-Gardena), who is also chair of the California Legislative Black Caucus.

In 2019, Bradford authored SBB 595, which established a cannabis equity fee waiver program. The Legislature passed that bill and the governor signed it into law the same year. The program was contingent on funding Bradford successfully obtained for its implementation in the Budget Act of 2021.

Right now, California is in the process of approving a $30 million fund that will eliminate business fees for some entrepreneurs entering the cannabis business in the state. Last week, the Department of Cannabis Control (DCC) released the regulations it will follow to implement Senate Bill (SB) 166, the budget trailer bill Gov. Gavin Newsom signed into law in September establishing the fee waiver program.

The program creates pathways for individuals affected by the War on Drugs to enter into the cannabis industry. Potential business owners who are living at or below 60 % of the Area Median Income; who were previously convicted or arrested of cannabis related offense; or who live in a community negatively impacted by past cannabis policies would be eligible for the program.

The waivers go towards licensing fees for their potential businesses which can range from $1,205 to $77,905. The DCC will start accepting fee waiver requests beginning Jan. 1, 2022.

The California Office of Administrative Law will publish the proposed regulations as being “under review” on its website: https://oal.ca.gov/. DCC will share instructions for submitting a public comment and participating in the regulatory process. The agency will also announce when the comment period, which will last five days, is open to the public.

“SB 166 is part of my continued mission for the Government to atone for the wrongs inflicted on people by supporting them with opportunities to enter and thrive in the cannabis market. I encourage anyone interested

in the cannabis industry, especially equity cannabis applicants and operators, to provide comments during the short window for feedback.”

Nicole Elliott, DCC Director, says the state will continue to invest in opportunities to make the licensing businesses more equitable, particularly for people who were impacted by the War on Drugs.

“We know access to capital remains a persistent challenge for California’s equity applicants and licensees,” she said. “These waivers aim to address this challenge for those who need the most financial support.”

Bradford said for government to truly understand the challenges entrepreneurs are facing, they have to make their voices heard and talk about the barriers to entry they face.

“These regulations are extremely important for determining who will and will not get application, licensing, and renewal fee waivers, and the amount of help they will receive,” said Bradford. “It is vital that the Administration have an accurate understanding of people’s experiences in order to create a framework that respects them.”

Blunt says he welcomes the $30 million investment the state is making to help with licenses and other costs but entrepreneurs like him need more.

“We need a two-year tax break. We have to pay some sales taxes but the extra cannabis taxes we pay, we need to break to recover. We can save some of that money and reinvest in our businesses and have some money for security,” says Blunt. “My business makes around $5 million a year, but the money I spend on security and taxes alone is easily in the $2 to $3 million dollar range — and I’m not counting other expenses like payroll and other operational expenses. How will we ever make a profit?”