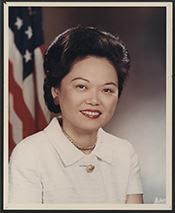 The younger Prudholme’s squad won three matches before being defeated, but her dad returned to the Golden State a happy father because his 19-year-old daughter is playing the sport she loves and getting a great college education.

“It makes me feel good to see her in that environment and also learning the trials and tribulations that sports teach you — especially from a female’s perspective,” Steve said.

The elder Prudholme said participating in sports allows Sophia to showcase her independence and strength of personality.

All of that is possible because of legislation championed by Democratic Congresswoman Patsy Takemoto Mink of Hawaii.

Mink co-authored and spearheaded the Education Amendments of 1972, more commonly known as Title IX. The law prohibits sex-based discrimination in any school or any other education program that receives monies from the federal government.

Title IX was signed into law by President Richard Nixon on June 23, 1972, and renamed the Patsy T. Mink Equal Opportunity in Education Act in 2002, after Mink’s death on Sept. 28, that year.

This week Mink would have turned 95. The tireless fighter for women’s rights and equity for everyone was born Patsy Matsu Takemoto in Paia, Hawaii Territory, on December 6, 1927.

Title IX ensures that young women are entitled to the same athletic chances as young men. It has been responsible for increasing the number of girls and women playing organized sports nationally.

The educational law has helped increase female enrollment in college. Women accounted for nearly 60% of all college students by the end of the 2020-21 academic year, and women were awarded 57% of the bachelor’s degrees conferred. Additionally, women earn nearly half of all law and medical degrees. Title IX is also a framework for handling sexual misconduct complaints on campuses.

Mink, known as an educational trailblazer, who changed the politics of gender, called Title IX her one of her most significant accomplishments as a member of Congress.

“I take special pride in honoring its contributions to changing our view about women’s role in America,” she said.

University of California-Irvine professor of Asian American Studies Judy Tzu-Chun Wu said Mink’s bouts with discrimination fueled her advocacy for Title IX against educational bodies that tried to exempt themselves from the civil rights law.

“A lot of people associate Title IX with sports, but it’s really about all aspects of education,” Wu said. “It’s about admissions; It’s about scholarships; It’s about having a positive environment for women to be in school.”

Title IX turned 50 this year, so it and Mink have been the focus of celebrations nationally. A portrait of Mink was unveiled at the U.S. Capitol on the anniversary of Title IX’s signing by Nixon.

Speaker of the U.S. House of Representatives Nancy Pelosi called Mink an American hero during the spectacle.

“With this portrait, the extraordinary courage of Patsy Mink will be known to all who come to the Capitol,” Pelosi said. “Women and girls — and that’s what I love about it — will know about her and that — her relentless fighting spirit. Patsy Mink made an enormous difference for women and girls in our nation.”

Many Americans don’t know about Mink’s championing of Title IX. “Women’s history is now more inclusive but there is still a tendency to celebrate the great white foremothers,” Wu said. “Sometimes Asian Americans are left out.”

While attending Nebraska, she was forced to live in a segregated dorm. She formed the Unaffiliated Students of the University of Nebraska for students of color who were prohibited from joining fraternities and sororities and the group succeeded in changing the university’s housing policies.

Mink’s ambition was to become a doctor, but being a woman of color, she was denied entry to 20 medical schools. She turned her focus onto earning a law degree and graduated from the University of Chicago Law School. In 1951 she married John Francis Mink, a graduate student in geology at the university.

She started her own law practice and became a lecturer at the University of Hawai’i after facing discrimination in her attempts to join a law firm.

Mink won seats in the territorial senate before Hawaii achieved statehood in 1959. In 1964, she became the first Asian American woman to serve in Congress. She won re-election five consecutive times.

Mink fought for equal rights and was against the Vietnam War and nuclear weapons. Her political leanings were steered by her background, Wu said.

“The society Mink grew up in was hierarchical in terms of class and race,” Wu said. “She experienced it in terms of gender. Those marginalizations shaped her desire to achieve equality.”

In 1976 Mink lost a bid for U.S. Senate. After serving as a member of the Honolulu City Council, she was re-elected to Congress in 1990 and served until her passing. She was awarded the Presidential Medal of Freedom posthumously in 2014 by President Barack Obama.

“There are still ongoing battles,” Mink said. “There has been gender revolution, but it’s not complete. If we compared women’s lives from the 60s and 70s to now it would be drastically different. But again, it’s not complete.”

Shortly after Mink’s death, Congresswoman Maxine Waters (D-CA-43), paying tribute to her friend at a Congressional memorial, reflected on a WNBA game the two women had attended.

“It was just a few months ago that I sat at the WNBA All Star Game where Patsy was honored for her 30 years of work,” Waters said. “As I looked at all of those strong, tall women out there playing and my dear child, Lisa Leslie, who won the All-Star honor that evening, I thought it was a short, little woman that caused this tall, big woman to be able to realize her dreams, to be able to hone her talents. What a wonderful moment that was.”