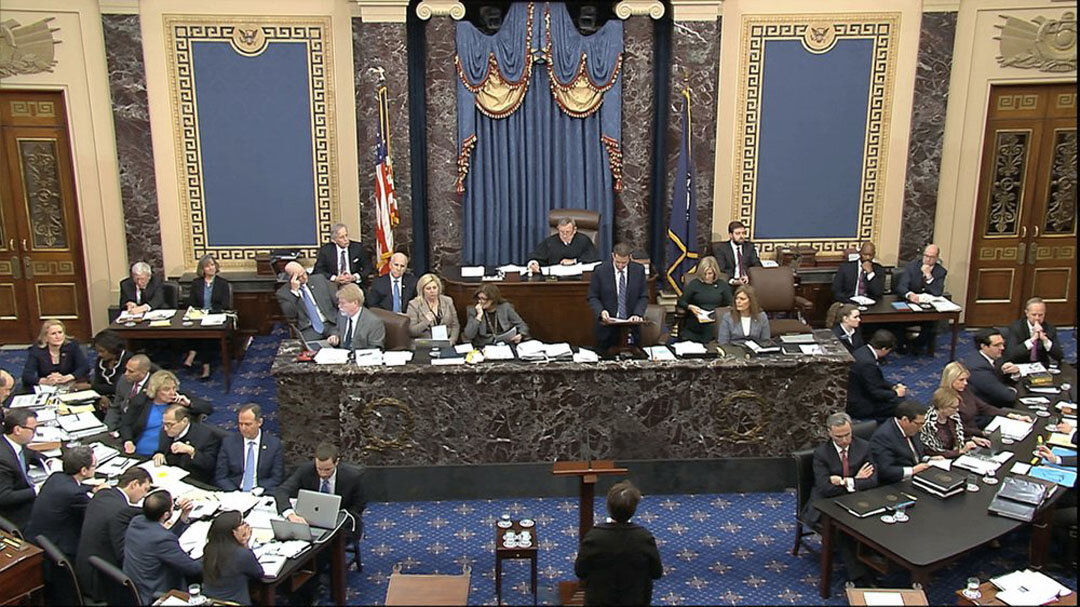 Senate Majority Leader Mitch McConnell stunned fellow senators and delayed the start of the proceedings with his decision to back off some of his proposed rules. He acted after protests from senators, including fellow Republicans, who were concerned about the optics of middle of the night sessions.

It was a dramatic setback for the Republican leader and the president’s legal team, exposing a crack within the GOP ranks and the political unease over the historic impeachment proceedings unfolding amid a watchful public in an election year.

Chief Justice John Roberts gaveled open the session, with House prosecutors on one side, Trump’s team on the other, in the well of the Senate. Senators sat silently at their desks, under oath to do “impartial justice.” No cellphones or other electronics were allowed

Instead of McConnell’s original. rules, 24 hours of opening arguments for each side will be spread over three days, giving Democrats momentum as they push to break the standoff over calling new witnesses.

As the visitors’ gallery filled with guests, actress-and-activist Alyssa Milano among them, and Trump’s most ardent House allies lining the back rows, the day swiftly took on the cadence of a trial proceeding over whether the president’s actions toward Ukraine warranted removal from office.

Without comment, the Republican leader submitted an amended proposal after meeting behind closed doors with his senators as the trial opened. The handwritten changes would add an extra day for each side’s opening arguments and stipulate that evidence from the Democratic House’s impeachment hearings be included in the record.

There is still deep disagreement about calling additional witnesses.

“It’s time to start with this trial,” said White House Counsel Pat Cipollone, the president’s lead lawyer in brief remarks as the proceedings opened in public.

S enate Democratic leader Chuck Schumer of New York offered the first of several expected amendments to the rules — a proposal to issue a subpoena to the White House for “all documents, communications and other records” relating to the Ukraine matter. It was rejected by Republicans, tabled on a party line vote 53-47.

Schumer then offered a second amendment, seeking documents from the State Department. It, too, was turned back on the same 53-47 vote.

A spokeswoman for Republican Sen. Susan Collins said that she and others had raised concerns about the restrictive rules McConnell had proposed.. The Maine senator sees the changes as significant improvements, said spokeswoman Annie Clark.

Collins, Sen. Rob Portman of Ohio and a substantial number of other Republicans from across the party’s ideological spectrum wanted to make the changes, according to two people familiar with the matter but unauthorized to discuss it in public. Some argued that the two-day limitation would have helped Democrats cast Republicans as squeezing testimony through in the dead of night.

The turnaround was a swift lesson as White House wishes run into the reality of the Senate. The White House wanted a session crammed into a shorter period to both expedite the trial and shift more of the proceedings into late night, according to a person familiar with the matter but unauthorized to discuss it in public.

“READ THE TRANSCRIPTS!” the president tweeted from overseas miles away, as he returned to his hotel at a global leader’s conference in Davos, Switzerland.

That’s the transcript of his phone call in which he asked new Ukrainian President Volodymyr Zelenskiy for “a favor.” A whistleblower’s complaint led the House to impeach Trump on a charge of abuse of power for pushing Ukraine to investigate Democratic rival Joe Biden and his son Hunter Biden as the White House was withholding military aid from the U.S. ally at war with bordering Russia. The Democrats cite that transcript as solid evidence against Trump, though he repeatedly describes it as “perfect.”

Democrats had warned that the rules package from Trump’s ally, the Senate GOP leader, could force midnight sessions that would keep most Americans in the dark and create a sham proceeding.

“This is not a process for a fair trial, this is the process for a rigged trial” Rep. Adam Schiff, D-Ca., the chairman of the House Intelligence Committee leading the prosecution, told reporters. He called it a “cover-up.

Schiff opened his arguments before the Senate playing a video of Trump calling for more witnesses to testify. Schiff noted the sudden change in proposed rules, made moments before he rose to address the chamber.

“The facts will come out in the end,” Schiff told the senators. “ The question is, will it come out in time?”

McConnell said, “The president’s lawyers will finally receive a level playing field,” contrasting it with the House impeachment inquiry.

The rare impeachment trial, unfolding in an election year, is testing whether Trump’s actions toward Ukraine warrant removal at the same time that voters are forming their own verdict on his White House.

Four senators who are presidential candidates are off the campaign trail, seated as jurors.

“My focus is going to be on impeachment,” Sen. Bernie Sanders, the Vermont independent, told reporters. He said his supporters would keep working “to defeat the most dangerous president in American history.”

The Democrats say the prospect of middle-of-the-night proceedings, without allowing new witnesses or even the voluminous House records into the trial, would leave the public without crucial information about Trump’s political pressure campaign on Ukraine and the White House’s obstruction of the House impeachment probe.

Trump’s legal team doesn’t dispute Trump’s actions — that he called the Ukraine president and asked for a “favor” during a July 25 phone call. In fact, the lawyers included the rough transcript of Trump’s conversation as part of its 110-page trial brief submitted ahead of the proceedings.

Instead the lawyers for the president, led Cipollone and a TV-famous legal team including Alan Dershowitz, say the two charges against the president don’t amount to impeachable offenses and Trump committed no crime.

Democrats in prosecuting the case against the president point in particular to a General Accountability Office report that found the White House violated federal law by stalling money to Ukraine that had been approved by Congress.

Roberts administered the oath to one remaining senator, James Inhofe, who was attending a family medical issue in Oklahoma last week when the other senators vowed the oath and signed the oath book.

Also Tuesday, the House Democratic managers overseeing the impeachment case asked Cipollone, the president’s lead lawyer at the trial, to disclose any “first-hand knowledge” he has of the charges against Trump. They said evidence gathered so far indicates that Cipollone is a “material witness” to the allegations at hand.

House Democrats impeached the Republican president last month on two charges: abuse of power by withholding U.S. military aid to Ukraine as he pressed the country to investigate Biden, and obstruction of Congress by refusing to cooperate with their investigation.

No president has ever been removed from office by the Senate. With its 53-47 Republican majority, the Senate is not expected to mount the two-thirds voted needed for conviction. Even if it did, the White House team argues it would be an ”’unconstitutional conviction″ because the articles of impeachment were too broad.