Gov. Says No More Tax on Diapers and Tampons, Period 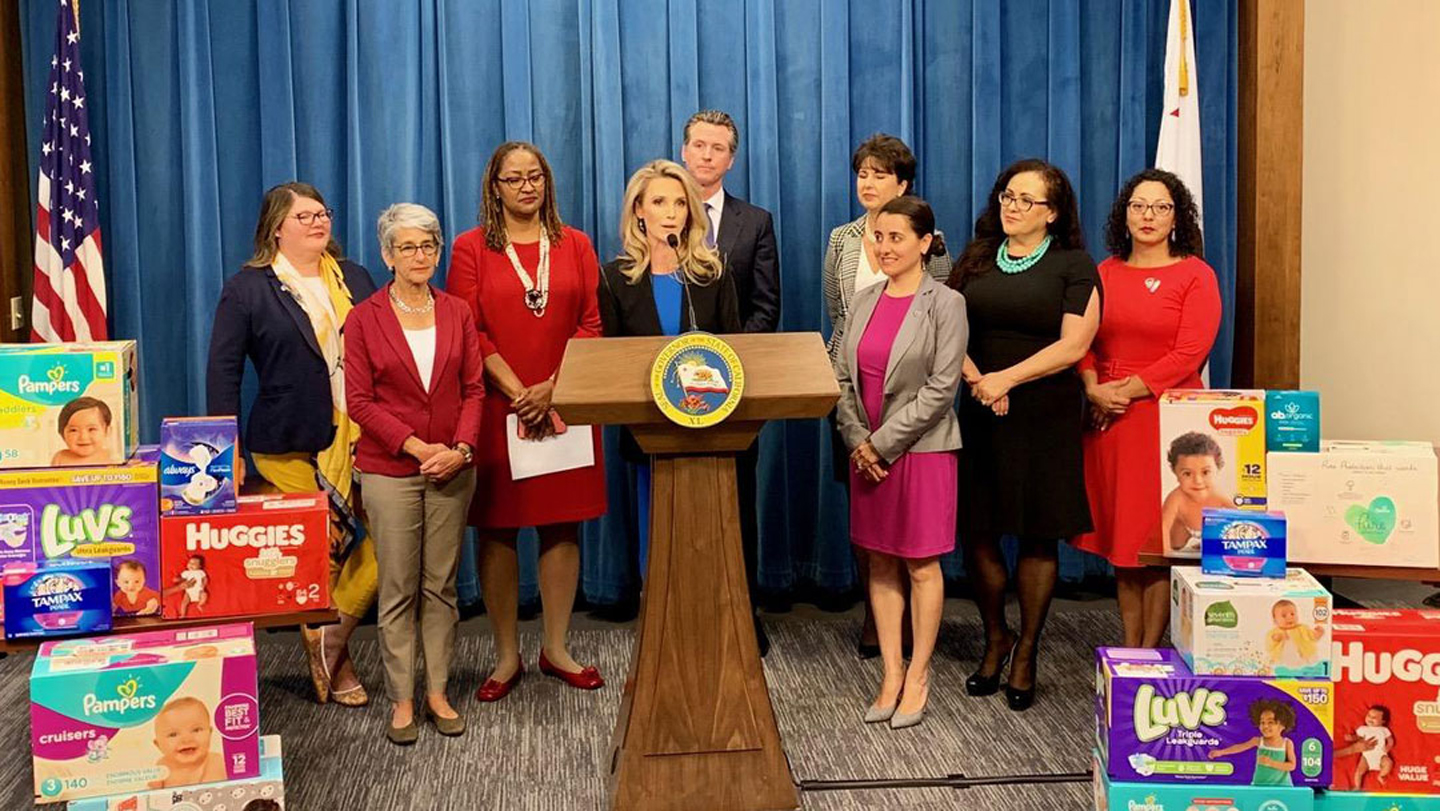 Could it get anymore California?

Probably not. At the governor’s unveiling Thursday of his sweeping $213 billion revised budget for the 2019 – 2020 fiscal year – and at an event Tuesday leading up to it – a few things we know about the Golden State’s reputation came to life – the social progressivism, optimism about the future, and even Tinseltown’s cinematic flair.

Yes, it got a little Hollywood upstate in Sacramento Tuesday.  A stage decorated with props – jumbo boxes of pampers and tampons – helped Gov. Gavin Newsom tell the story of his plan to eliminate sales taxes on diapers and other menstrual products over the next two years; the policy would be subject to renewal by the legislature after that.

Estimated at a $35-million-a-year loss in revenue for the state and close to an additional $20 million for local governments annually, the proposal is part of the governor’s “parents agenda” for women, children and families built into the first budget proposal of his four-year tenure.

If the legislature approves, the tax exemption will include other feminine hygiene products like sanitary napkins, menstrual sponges and menstrual cups.

Flanked on stage by six members of the California Women’s Legislative Caucus at the State Capitol, the governor sounded confident.

“We can afford it and it is the right thing to do,” Gov. Newsom said. “There’s a deep agenda here and I hope you’re hearing it. An agenda of affordability, an agenda on the cost crisis and an agenda to support parents.”

In the spirit of the event, the press releases the Governor’s office sent to the media used the gender-neutral title “first partner” to refer to his wife Jennifer Siebel Newsom who joined him on stage with the women’s caucus.

“Nothing is more important than our children’s futures,” Siebel Newsom said. “We are fighting for a future where our daughters will be valued equally to our sons, a California where every single child, no matter the ZIP Code or the family that they’re born into will have the best possible start in life.”

The governor, who referred to himself as a “feminist,” is making budget proposals long fought for by women activists across the state and in the legislature. Some included in the budget are a $1,000 in earned income tax credit for families with children under 6 years old; a $134 million expansion of child care programs partially funded by tax revenue from legalized marijuana; an infusion of $54 million into the state’s children’s public assistance program, CalWORKS, to be administered by counties; and an extension of paid family leave from six to eight weeks.

Even with the hundreds of billions of dollars in spending the governor has budgeted for the next year, California is still in great financial shape. The country’s most populous state, and the 5th largest economy in the world, has stockpiled some $21 billion in its budget surplus.

Yet Newsom is doing some budget resiliency planning for hard times ahead. He said a recession that could amount to as much as a $70 million drop in revenue is inevitable. So he is taking steps to shore up the state’s reserves with a $16.5 billion investment in the state’s “rainy day” fund and another $400 million deposit into an education reserve fund.

A number of proposals could directly impact Black Californians, particularly those living in hard-to-count census tracts around the Bay Area, Los Angeles and the Inland Valley where there are larger numbers of African Americans, higher concentrations of poverty, and rapid gentrification that is making most of those areas unaffordable for long-time residents. There is a loan repayments deal amounting to $90 million for teachers in science, math and special education and another $120 million for medical professionals who work in areas of the state with critical needs.  The governor is also proposing $40 million for public colleges and universities to help students who are homeless students. To help renters facing eviction, there is a line item for $20 million.

When the budget comes before the legislature, Assemblymember Reggie Jones-Sawyer (D- Los Angeles), who is African-American, is expected to push for $100 million for youth programs designed to deter children under 18 from getting involved in crimes that could get them arrested or sent to prison.

The governor’s budget also slates $150 million more in community grants geared towards helping the homeless with housing and other services.

The proposed budget also lives up to the perception that California is a maverick when it comes to progressive public policy. There is a provision in it to extend state medical insurance to undocumented immigrants under 26 who qualify.

Not everyone is applauding the hefty tax cuts the governor wants for California.

“Piecemeal carve-outs in the state’s already convoluted tax scheme are irresponsible, not to mention an inefficient way to help people who are struggling to get by,” the Los Angeles Times board wrote in an editorial.  “Does the duchess of Sussex really need a tax break on nappies for Archie when she’s in town? Of course not. But she will get one, along with all other consumers — rich and poor alike — and as a result, state and local governments will have about $55 million a year less to spend on programs and services.”

Gov. Newsom says he wants legislators to be proud of the stances they take when debating or voting on his budget.

“I’m absolutely open to argument,” he told lawmakers at the close of his press conference Thursday. “If you have better ideas, bring them on. Let’s get something good done that represents the best of this state.”

Lawmakers have until June 15 to pass the budget. The governor is expected to sign on June 31st before it goes into effect July 1.