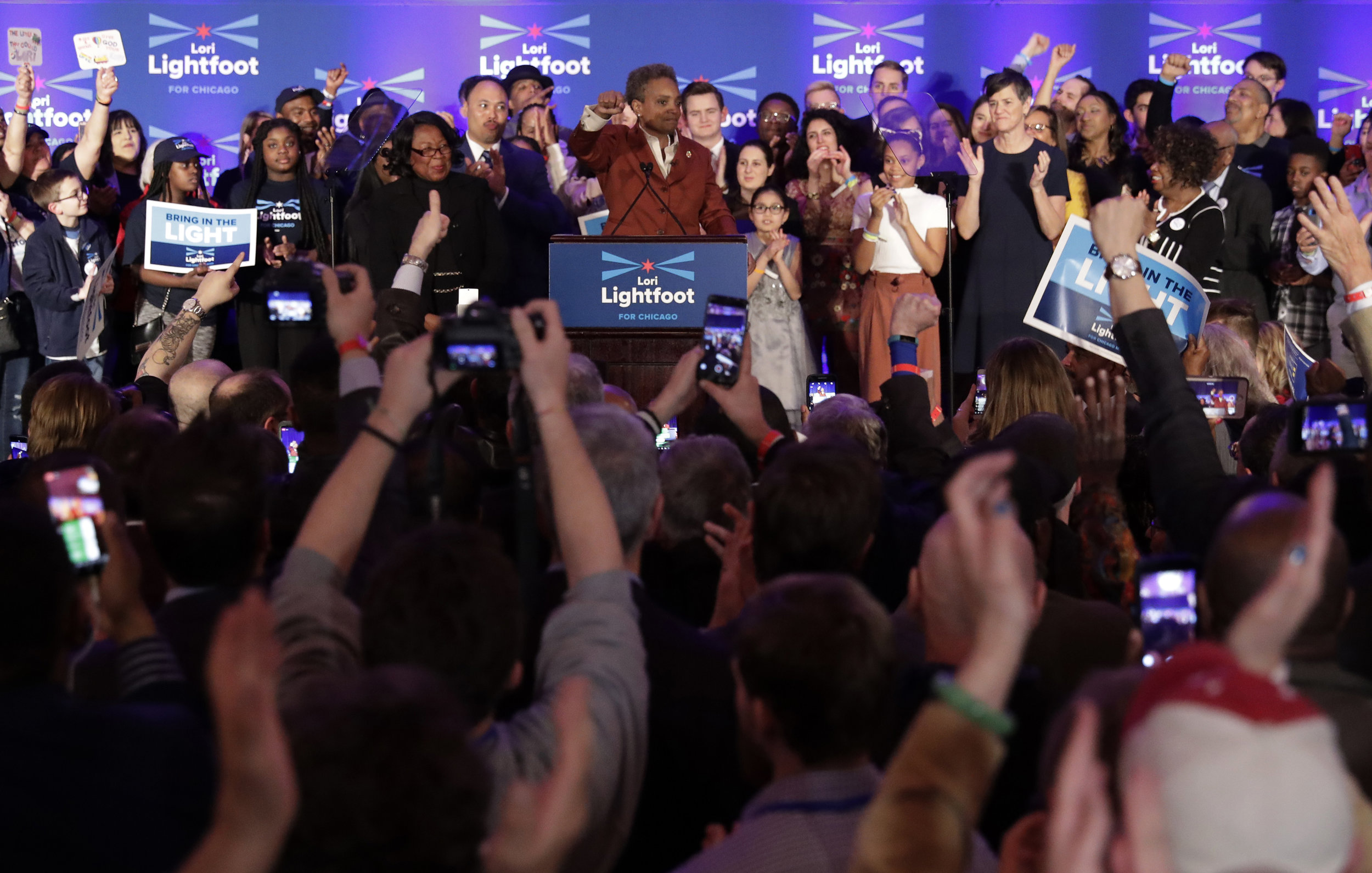 Chicago, IL (AP) — Chicago Mayor-elect Lori Lightfoot’s resounding victory was a clear call for change at City Hall and a historic repudiation of the old-style, insider politics that have long defined the nation’s third-largest city.

Lightfoot, a former federal prosecutor who’d never been elected to public office, defeated Cook County Board President and longtime City Council member Toni Preckwinkle on Tuesday with backing from voters across the city. Late results showed Lightfoot, 56, winning every one of the city’s 50 wards.

Lightfoot also made history, becoming the first black woman and the first openly gay person to be elected Chicago mayor. Chicago will become the largest U.S. city to have a black woman serve as mayor when Lightfoot is sworn in May 20. She will join seven other black women currently serving as mayors in major U.S. cities, including Atlanta and New Orleans, and will be the second woman to lead Chicago.

“Out there tonight a lot of little girls and boys are watching. They’re watching us, and they’re seeing the beginning of something, well, a little bit different,” Lightfoot told a jubilant crowd at a downtown hotel. “They’re seeing a city reborn.”

She pledged to make Chicago “a place where your zip code doesn’t determine your destiny,” to address the city’s violence and to “break this city’s endless cycle of corruption” that allows politicians to profit from their office.

Chicago Mayor-elect is promising to end the city’s “endless cycle of corruption. Lori Lightfoot is the first black woman and the first openly gay person to be elected Chicago mayor. (April 3)

Lightfoot emerged as the surprising leader in the first round of voting in February when 14 candidates were on the ballot to succeed Mayor Rahm Emanuel, who decided against running for a third term.

She seized on outrage over a white police officer’s fatal shooting of black teenager Laquan McDonald to launch her reformer campaign. She got in the race even before Emanuel announced he wouldn’t seek re-election amid criticism for initially resisting calls to release video of the shooting.

Joyce Ross, 64, a resident of the city’s predominantly black West Side who is a certified nursing assistant, cast her ballot Tuesday for Lightfoot. Ross said she believes Lightfoot will be better able to clean up the police department and curb the city’s violence.

She was also bothered by Preckwinkle’s association with longtime Alderman Ed Burke, who was indicted earlier this year on charges he tried to shake down a restaurant owner who wanted to build in his ward.

“My momma always said birds of a feather flock together,” Ross said.

Preckwinkle said she called Lightfoot Tuesday night to congratulate her on a “hard-fought campaign.”

“While I may be disappointed, I’m not disheartened. For one thing, this is clearly a historic night,” she told a crowd gathered in her South Side neighborhood. “Not long ago two African American women vying for this position would have been unthinkable. And while it may be true that we took two very different paths to get here, tonight is about the path forward.”

That path will have major challenges. Chicago has been losing population, particularly in predominantly African American neighborhoods hit hardest by violence and a lack of jobs.

The new mayor will take over a city that faces massive financial problems. She will have just a few months to prepare a new budget, which in 2020 is expected to have a roughly $250 million deficit. Lightfoot also will take over the worst-funded public pensions of any major U.S. city. Chicago’s annual payments to the retirement systems are slated to grow by $1.2 billion by 2023.

She has expressed support for a casino in Chicago and changing the state’s income tax system to a graduated tax, in which higher earners are taxed at a higher rate — two measures lawmakers have tried for unsuccessfully for years to pass.

Violence and policing will also continue to be an issue, and one that has proven to be politically difficult.

The Chicago Police Department must implement a federally monitored consent decree approved in January. It followed the McDonald killing and a U.S. Justice Department review that found a long history of excessive use of force and racial bias by officers.

While voters also elected several newcomers over City Council veterans, Lightfoot will have to work with a council that has a sizable number of members who are the type of politicians she railed against during her campaign.