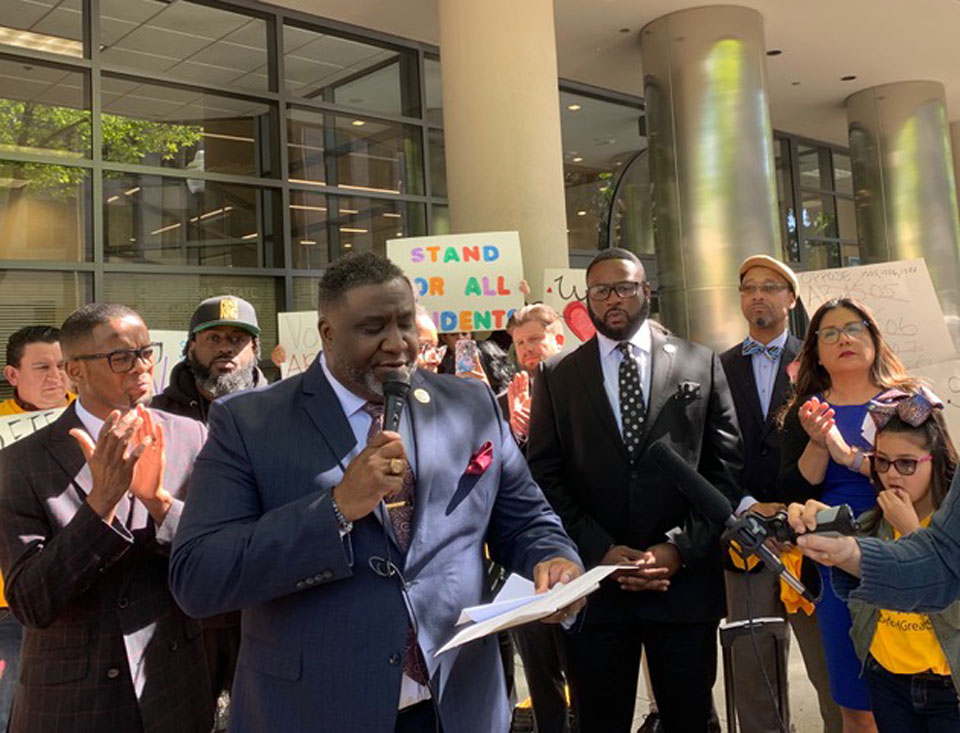 The set of legislation, according to Weber, does not consider the full impact of charter schools in California – particularly in disadvantaged communities – and the bills do not go far enough to detail how the changes they propose would work.

“I judge everything that comes in on its merits and whether or not it’s beneficial to children,” said Weber. “Clearly, it brings me great concern to see a significant number of Black and Brown people here talking about wanting something different for their children. It’s unfortunate that the critical question is not being asked and that is ‘what is best for our children?’”

The Assembly Education Committee voted 4-1 in favor of AB 1505, AB 1506 and AB 1507. Weber, who is an educator, abstained after stating that four of the six committee members who cast the first votes in favor of the bills were also co-authors of the legislations.

“I don’t feel like there is a whole lot of room for persuasion,” Weber told her Education Committee colleagues, accepting that the bills were on track to pass.

After listening to the comments from students, teachers and advocates supporting or opposing the bill, Weber says she did not have enough information to cast a yay or nay vote in good conscience.

If they pass the legislature, the three bills would set off drastic changes to California’s Charter school law which was signed in 1992.

Supporters say the main intentions of the bills are to increase accountability and strengthen oversight of charter schools.

“Charter school reform is long overdue,” says Patrick O’Donnell (D-Long Beach) who co-authored AB 1505. “These bills will provide school districts the ability to make responsible and informed decisions regarding authorization and renewal of charter schools, which are critical for student success and taxpayer accountability.”

Important concerns overlooked by the charter school legislation, Weber told the co-authors of the bills, include very little consideration given to the fact that Gov. Gavin Newsom has already commissioned a task force to investigate how charter schools affect communities and budgets.  That report is scheduled to be released July 1.

Also, she says, the bills do not ask why parents who live near traditional public schools still opt to send their children to charter schools. On top of that, no formula or guidance is given in the legislation to determine what is a reasonable cap on charter schools in each school district.  Neither do they propose or outline penalties for districts that abuse their authority when renewing or repealing charters.

The California State National Association for the Advancement of Colored People (NAACP) is also supporting the bills to the surprise of some like Al Sharpton’s National Action Network California chapters and the Rev. K.W. Tulloss, president of the Baptist Ministers Conference of Los Angeles and Southern California.

“Schools across California are profoundly separate, and unequal based on race and class,” said Julian Vasquez-Heilig, Education Chairperson for the California State NAACP at a press conference before the hearing. “These issues are being amplified, in fact, made worse by the privatization and private control movement.”

“Today, we could not be clearer: This package of bills sponsored by CTA is poison,” Myrna Castrejón, president and CEO of the California Charter Schools Association, told CBM before the hearing. “This package of bills doesn’t just threaten potential schools that may not yet exist to direct or divert attention to other schools. It actually threatens every single existing charter school.”

For more than 50 years now, California’s public-school districts have largely failed African-American students, creating a glaring achievement gap between White and Black students, especially those from disadvantaged neighborhoods. The Department of Education earlier this year released a list of California’s lowest performing schools. Many of of the 481 schools cited in the report are located in areas of the state where there are large concentrations of Black and Hispanic residents. Only 34 of them were charter schools.

AB 1507, authored by Assemblywoman Christy Smith (D-Clarita), would prevent any charter school site from being established outside of its authorizing district.

Margaret Fortune, CEO and founder of Fortune Schools, a network of six charter schools in Sacramento and one in San Bernardino with a focus on closing the African-American achievement gap, is confident that the bills are a way to eradicate charter schools should school districts have their way. She, Castrejón, a group of students, and other charter school supporters stood in protest outside of Assemblyman McCarty’s office before the hearing.

“If traditional public schools can not teach Black kids to the level of excellence – which all the data points to that they can not  – how dare you try to prevent charter schools from doing it?” Fortune said. “How dare you try to balance your budget on the backs of Black kids? Why are you are trying to corral them back to schools that are failing?”