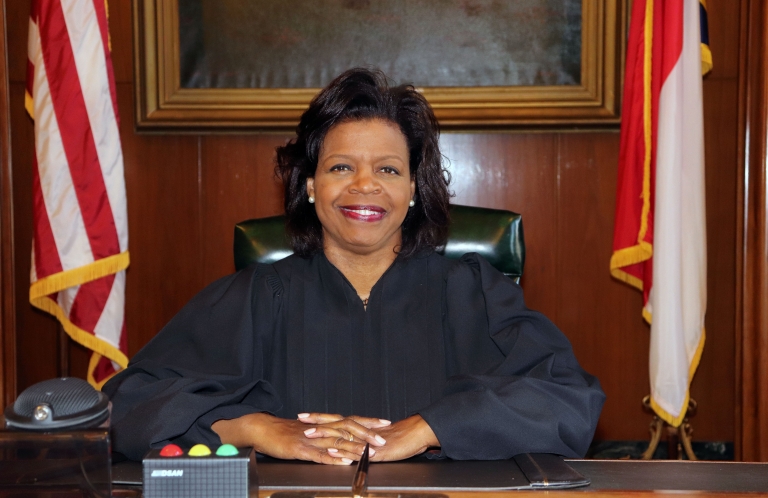 Chief Justice Cheri Beasley, the first black woman supreme court justice to lead the state Supreme Court, was sworn in this past weekend in front of more than 1,000 people, according to the Fayetteville Observer.

Beasley, appointed to the state’s highest court in 2012 by Democratic governor Beverly Perdue, was sworn in by Associate Justice Paul Newby, is the court’s second black Chief Justice. The Associated Press reports that her ceremony was attended by former Chief Justice Henry Frye, the first black chief justice.

Current Democratic governor Roy Cooper named Beasley to the post last month, telling media he knew Justice Beasley “to be fair and deeply committed to all North Carolinians.” Beasley began her judicial career as a district court judge in Cumberland County in 1999, also serving four years as an associate judge for the state Court of Appeals.

“Today is really a day of hope,” Beasley said according to the Observer. “It’s a day of hope for justice, really for all of us.”

State Republicans, angered by Cooper’s decision to break with the tradition (not law) of appointing the most senior Supreme Court justice, were less than thrilled.

“Today Governor Cooper decided to skip over two more experienced justices and elevated a justice with less Supreme Court experience to the open post of Chief Justice,” said North Carolina Republican Party Chairman Robin Hayes according to ABC11.    “One can only believe the reason Cooper decided to ignore the longstanding, nonpartisan tradition of the Court was purely politics.”

Newby told those gathered that it was important for the state’s court to reflect the diversity of North Carolina and its communities. “In our court’s first 155 years, this bench had a notable paucity of diversity,” Newby said during the ceremony.

“As our state continues to grow,” Newby said, “it’s important that our courts, including this Supreme Court, reflect the diversity and richness of experiences of the people who live in our great state,” he added.

Beasley, taking over for the newly retired Mark Martin, will be up for re-election in 2020. She tried her best to put her appointment into perspective.

“It is not lost on me, this historic fact,” Beasley said, “especially since this is Black History Month. I know that the work we do is hugely important, but the other thing I think about are the little girls along the way, who ought to have a sense of promise and hope for their futures, and so I hope that in some way my service inspires young people especially, but really I hope it is a show of symbolism for where we are in North Carolina.”