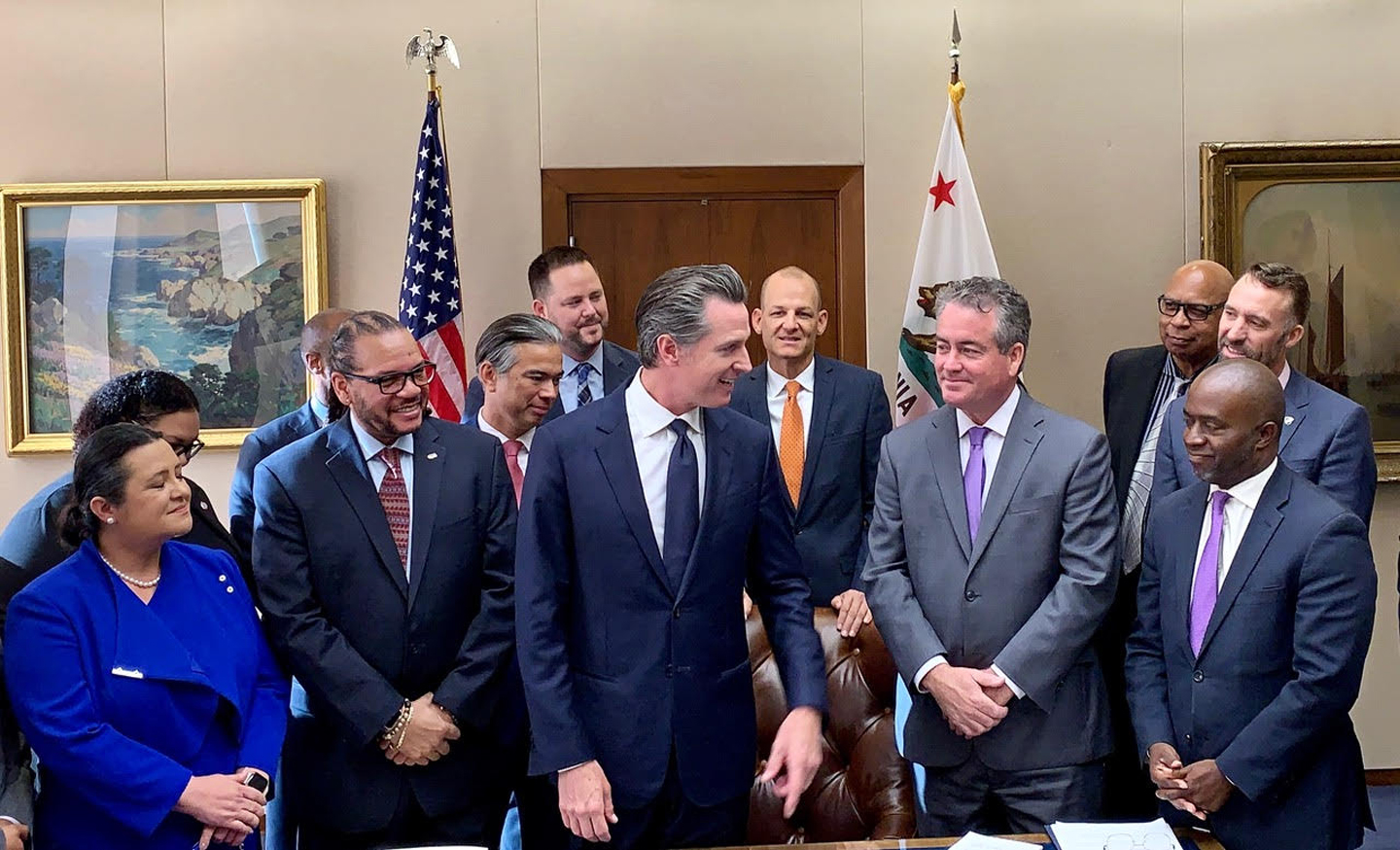 Sacramento, CA — Gov. Gavin Newsom signed a number of bills last week. Among them is one that  will allow Black-owned-and-operated charter schools in California to continue to educate some 52,800 Black students in the state without the fear brought on – and intensified – by speculations that certain legislators, with the backing of teachers unions in California, were angling to shut them down.

The other will benefit African American-owned newspapers and other niche market newspapers.

The first, AB 1505, ends the uncertainty that put Black charter school operators on the defensive during a more-than-a-year long fight about the future of charter schools in the state.

African American-owned charter schools in California are largely credited with working on the leading edge of efforts to close the wide academic achievement gap that exists between African-American students, who are the lowest performing racial group in the state, and their peers of other races.

In English Language Arts, for example, there is more than a 40 percentage-point gap between African-American public school students’ standardized test scores and that of their White counterparts. In math, the disparity is more than 50 percentage points.

O’Donnell and other Assemblymembers on the education committee championed two other charter school bills, AB 1506 and 1507. Those companion bills to 1505 proposed restricting the operations and expansion of charter schools.

Unlike 1505, the other two bills did not pass in the legislature.

“There is a package of bills, that has been introduced by various Assemblymembers, including our own Kevin McCarty, also a member of the California Legislative Black Caucus, which taken together amount to a ban on charter schools,” said Fortune in March while the Assembly was debating the bill.

AB 1505 makes the most significant changes to California’s Charter School law, which former Gov. Pete Wilson signed into law in 1992. The language and provisions in the final version of the bill includes the input of various education stakeholders in the state, including unions representing traditional public school teachers, state education administrators, academics, as well charter school leaders and backers.

“It listens to the needs of school districts and authorizers to be able to weigh the fiscal impacts and the community impacts before making a decision about whether or not to authorize a charter school,” said Tony Thurmond, State Superintendent of Public Instruction. “At the same time, it listens to applicants who have said ‘we need to have a clearer path to know how renewal will happen.’ This legislation is long overdue. “

The law allows local school boards, which authorize charters, to now close charter schools for fiscal and governance issues, and also to consider how a new charter school might impact the a school district financially when reviewing an application to open a new public charter school or to renew an existing charter.

It also gives authorizers the right to deny an application if a school district is experiencing financial problems and empowers school districts or county offices of education to now oversee the operations of charter schools.

In addition, it places a two-year moratorium on “non-classroom based” charters, including publicly funded homeschooling and independent study programs and computer-based learning.

Under the new provisions of 1505, charter schoolteachers will now have to obtain training and certification required by the state to teach. They will also be subject to state level background checks before they are hired.

“We recognize this journey does not end today,” said Gov Newsom at the bill’s signing. “I am not naïve about this piece of legislation solving all problems – and now everybody goes back, holding hands in perpetuity.

On Oct. 2, a day before signing AB 1505, Gov. Newsom signed AB 170, a law that gives newspapers in California a one-year extension to reclassify the contract drivers who deliver their newspapers as W-2 employees, or come up with  a new way to distribute their newspapers to subscribers.

Black-owned newspapers across the state joined hundreds of others last month to call on the governor and legislature to create a carveout for their industry under the new rules of AB 5, also known as the Dynamex Law. The publications – many of them small family-owned weeklies – said the high cost of having to immediately hire part-time contract drivers as full-time employees would have been unaffordable and forced them out of business.

“As a constitutionally protected industry, we are fighting on many fronts to continue to report critically and objectively on issues that are important to the people of California. And CNPA, for over 130 years, has remained vigilant in that effort as we help our hundreds of member and non-member news publishers fulfill their missions to serve their communities and provide vital information to the public,” said Paulette Brown-Hinds, President of the California Newspaper Publishers Association.

“With the signing of AB 170,” Brown-Hinds continued, “we appreciate the overwhelming support from the legislature and Governor Newsom in securing more time for our industry to find a model for newspaper carriers that works for news publishers and complies with state law.”

Senate Republicans submitted 12 sets of amendments to AB 5, including the one used as the basis for AB 170 that gives a temporary reprieve to the newspaper industry.

“I am encouraged that the governor signed AB 170 into law,” said Senate Republican Leader Shannon Grove. “More work needs to be done to assist independent contractors in the Golden State.”