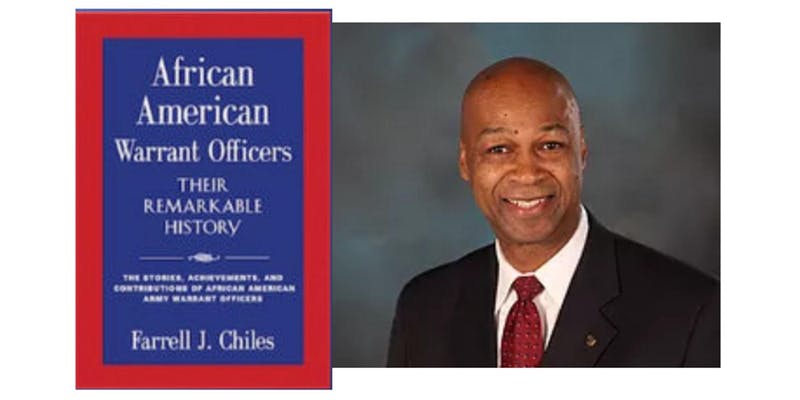 Pomona, CA — Farrell J. Chiles the man you should know, who is a former serviceman who is also an author. Make that a three-time author who has recently completed his third book titled “African American Warrant Officers-Their Remarkable History.”

In the book Mr. Chiles have detailed accounts of African American men and women who served as Warrant officers spanning as far back as World War 2. One of the many organizations he belonged to is known as The Rocks, Inc. which consist of Officers and African-American Warrant officers across the country; where he first began writing articles about these service men and women. Now what exactly is a Warrant officer and why you need to know about them? Another good question. First a Warrant officer is an officer in the Us armed forces ranking below the commissioned officers and above the noncommissioned officers. Now to address the ladder question.

Mr. Chiles shared a personal story with me about a gentleman named Leonard Dungey who became a Warrant officer in 1942 and served in WW2. Mr. Chiles and Mr. Dungey started communicating at least once a week. Mr. Dungey was merely a gently man who was excited to share his numerous war stories. But like many he did not know how to begin, so they came-up with the idea of having Mr.Dungey personalize his stories by writing letters as if he was forwarding them to a family friend. After all these personal war stories in the form of letters stockpiled, assisted and inspired by Mr. Chiles Leonard Dungey compiled his own book which he published at 92 years old in 2014 titled “The Best Man I Can Be.”

This is just one of the many personal and touching stories “African American Warrant Officers-Their Remarkable History” consist of within the confines of its pages. We’ll continue the book later let’s return to the man, Farrell J. Chiles possess a bachelor’s in political Science which he received from the University of the State of New York Albany and did graduate work in public administration at the University of Laverne.

Although African American Warrant officers by Farrell J. Chiles tells the unsung stories of men and women who served, this is not the first time Mr. Chiles tasked himself with being the custodial of history. He was also responsible for etching untold black stories in the proverbial stone for all the world to see earlier in life which is what first began his interest in writing.

He belonged to an organization called Blacks in Government “BIG” noticing none of the member had any of their history written recorded, Mr. Chiles acting in his nature took on the leadership role by choosing to carry the responsibility of introducing the protocol of narrating members history and contributions to the group. Beginning with his own personal narration of how it was to serve as chief of the board for 5 years in the group through his articles various articles.

Speaking of Mr. Chiles leadership qualities which ties into his first book “As Big as it Gets.” This book is based on his time serving and operating a non-profit organization in hopes of making others interested in effectively operating a non-profit as well with an emphasis on leadership. His second book which he published in 2014 “African American Warrant Officers in Service to our country” focus on the analytical side of warrant officers.

Moreover, with all the many successes Farrell J. Chiles has compiled for himself one of the greatest still being inspiring Leonard Dungey to finally tell his story. As well as inspiring his Daughter and Granddaughter to publish their own books who are also extraordinary authors in their own right. Farrell J. Chiles the man you need to know favorite proverb is, “Until Lions have their own historians the history of the hunt will always glorify the hunter” and Mr. Chiles is definitely stepping up to the level of responsibility the proverb evokes. Becoming not only an asset of a historian not only to the African American community but America as a whole.

You can meet a purchase Farrell J. Chiles as well 3rd book during his book signing at the African American Museum of Beginnings on Sunday July 29, 2018 at 3pm and Sunday August 19th at dA Center for the Arts at 3pm as well.