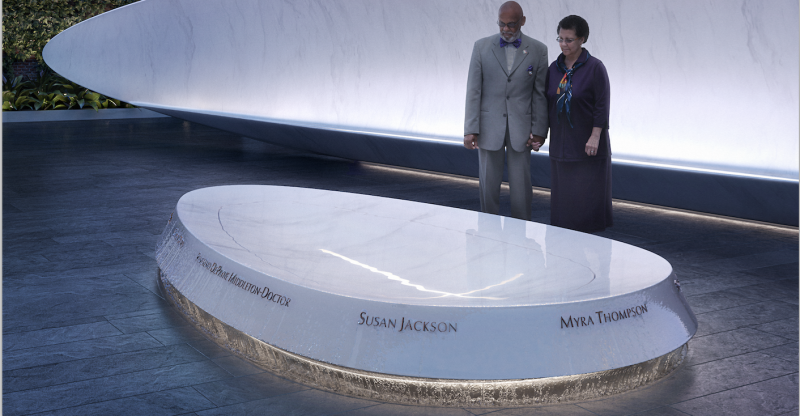 Before white supremacist Dylann Roof shot and killed nine parishioners in Emanuel African Methodist Episcopal Church in Charleston, S.C., the church was known foremost as being the oldest AME church in the South.

Now, three years after the deadly shooting, the church plans to construct a memorial dedicated to the nine victims and five survivors of the shooting.

The memorial designs unveiled on Sunday were the work of Michael Arad, who designed the National September 11 Memorial in New York City. As the New York Times reports, the memorial is intended to inspire contemplation of the church’s long history and legacy:

Sections of the church’s parking lot would be transformed into two meditative spaces, one a stone memorial courtyard, the other a grassy survivors’ garden. Together they would speak to the suffering and resilience of a church that has outlasted two centuries of persecution through its practice of faith and forgiveness.

The focal point of the memorial is a pair of sleekly curving high-backed pews, carved of white marble, that would welcome visitors from Calhoun Street like outstretched arms.

In a press release announcing the memorial, Dudley Gregorie, a Charleston City Council and a member of Emanuel A.M.E. Church—affectionately referred to as “Mother Emanuel” by many congregants—said the white marble pews reminded him of angels.

“Sometimes it reminds me just of the arms of God,” he said.

In the same press release, Arad noted that the church was a place of resistance that also provided “a place of fellowship and sanctuary.”

“Throughout its 200-year history, it has endured slavery, discrimination and racism,” he said. “The Emanuel Nine tragedy marks another dark moment for the church, though faith helped to heal and bring light into the darkness.”

The memorial, like the proposed International African American Museum, to be built on Charleston’s waterfront, would not only serve as a tribute to the lives lost on June 17, 2015, it would serve as a much-needed counterpoint to the hundreds of monuments to the Confederacy—that is, white supremacy—that still litter the Southern landscape.

The church is now tasked with raising $15 million to $20 million for the memorial, the Times reports. Houston Texans owner Robert McNair, an alumnus of the University of South Carolina, has pledged an initial $1 million through his foundation.

While those involved in the campaign to build the memorial are optimistic they’ll raise the money, the Times notes that the historic church also needs to raise several million dollars for repairs and renovations to the 200-year-old sanctuary. Gentrification in Charleston, S.C., has impacted the church’s core membership, the paper reports, making fundraising challenging.

By Anne Branigin, The Root