3 Questions With ‘Sorry to Bother You’ Director Boots Riley 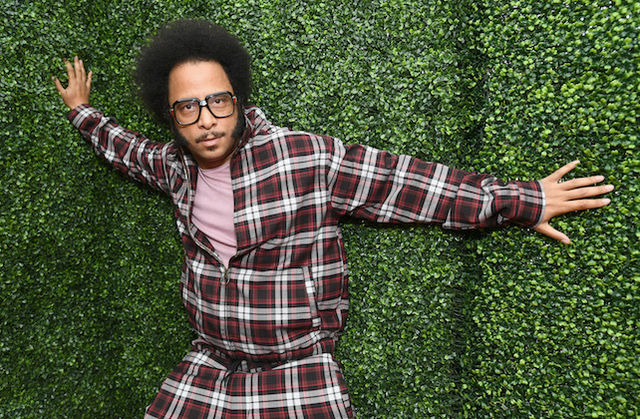 Riley talked to Colorlines about bringing his revolutionary politics into his first film and the activism he hopes “Sorry to Bother You” inspires.

Those who were familiar with Boots Riley prior to this year will not be surprised by the irreverent and activist lens he brings to “Sorry to Bother You.” Riley’s debut narrative film, which opens nationwide today (July 13), combines surrealism and caustic humor to illuminate how American capitalism and racism compound the woes of working people of color. A similar aesthetic guides much of his work with The Coup, the Oakland-based hip hop group he co-founded with the late Pam the Funkstress that also developed the movie’s soundtrack.

As the director and writer, Riley makes the film hilarious and accessible. He spoke to Colorlines about packaging his radical politics in a capitalist product and the impact he hopes the film has on the world.

Why did you choose to take this anti-capitalist message into a medium where production, release and distribution are all directed by market forces?

I didn’t think about it in that way. I just thought about the reality that the people that I’m trying to get to—the working class—are plugged into those networks. What other networks are they plugged into that aren’t tied into capital? If someone has the idea of avoiding those networks, then they have a different priority than actually organizing the working class into something that can engage in class struggle.

“Sorry to Bother You” explores racism in its various intersections, both obvious and not, with neoliberalism and poverty. How explicit did you intend to make this connection between racism and classism?

I find that when I create stuff and go big-idea-in, it comes out mechanical. That’s my critique of other cultural products that I’ve seen from progressive sources. They end up not being as efficient because, in my opinion, only people that agree with [the message] end up watching it. I took the idea of the “White voice,” which represented the things I had to go through in telemarketing. Everything I go through is connected to some larger idea, so I go from that out. Then I think about the small details and context of the world and what I believe in.

In general, I had a few key ideas: I knew it was going to be in the telemarketing world, that the main characters were Black and there would be a struggle that forced [Green] to decide which side he was on. But those elements already tell you that certain things will be discussed. I didn’t have to inject ideas about racism, or how capitalism and race intersect. It’s built in to me making the world more real.

Given that inspiration, what do you hope people do after seeing this movie?

There’s the open hope and the reality-mitigated hope. The open hope is that [laughs] people join organizations, campaigns or movements that allow them to engage with the world. I think that’s one of the things people think about with this movie: engaging with the world by being involved in struggle. But there has to be movement around them that actually challenges them to join. If everything around them is extracurricular to their life, the movie’s effect will be minimal. But where there are campaigns that are part of their life—something happening at work, in their neighborhoods—hopefully, people will be able to intersect with those movements.

Catch “Sorry to Bother You” at a theater near you, and listen to The Coup’s “OYAHYTT (feat. Lakeith Stanfield),” the first single from the film’s forthcoming soundtrack, below. By: Sameer Rao, Colorlines