The Must-Read Race and Culture Books of the Summer 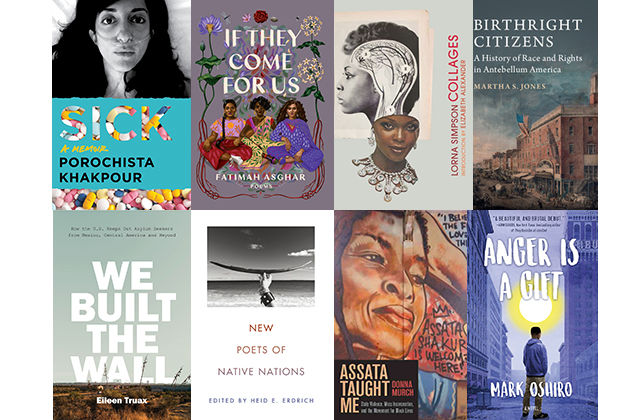 From memoirs to poetry to fiction, these titles will deepen your understanding of what’s going on, inspire activism and even entertain the kids.

Since the first official day of summer (June 21) we’ve had quite a few hot messes. From the intensified criminalization of immigrant families to the Supreme Court decisions to uphold the ”Muslim ban,” strengthen anti-abortion crisis pregnancy centers and weaken public labor unions, it’s been a lot. But resistance against these regressive policies and laws is also heating up. Check out these summer titles that will help you understand today’s political climate, inspire you to take action, engage the kids in your life and seduce you with language.

“White Fragility” introduces a constructive way for organizers to respond to White people whose discomfort prevents them from understanding and addressing racism (Beacon Press). >> In “Assata Taught Me“ radical scholar Donna Murch gives a profound analysis of the current movement for Black lives and its predecessors (Haymarket). >> “As Black as Resistance” is a manifesto that looks at the relationship between anti-Blackness and U.S. imperialism and posits how an anarchist framework could open the gates to liberation (AK Press). >> In his incisive memoir, “Homeboy Came to Orange,” longtime activist Ernest Thompson recounts how he joined the people of Orange, New Jersey, to fight for labor rights and racial justice (New Village Press).

National Book Award winner Jacqueline Woodson offers children poetic words of encouragement and self-love for when they feel scared and alone in her new picture book, ”The Day You Begin.” You can also find it in Spanish (Penguin Random House). >> ”My So-Called Bollywood Life” is a young adult rom-com that follows an Indian-American girl as she navigates crushes, drama and her love of film (Penguin Random House). >> “Collaboration/Colaboración” is a bilingual book filled with watercolor paintings that teaches children about cooperation and play (AK Press). >> In “The Poet X,” Dominican poet Elizabeth Acevedo tells the story of an Afro-Latina teen from Harlem as she asserts her identity and discovers her independence (HarperCollins). >> “Anger is a Gift” is the story of a young Black teen who struggles with systemic racism, his gender identity and mental health and ultimately discovers the healing power of activism (Macmillan). >> ”Girls Resist!” is an activist handbook for teens who want to ignite change and lead a social revolution (Quirk Books).

“We Built the Wall” examines how the United States’ recent geopolitics have dictated which asylum seekers are welcome into the country (Verso). >> In “Birthright Citizens,” historian Martha S. Jones retells how formerly enslaved African Americans fought difficult legal battles to ensure their citizenship under U.S. law (Cambridge University Press). >> “The Heritage” takes a look at present-day Black activist athletes protesting police violence through deep research and interviews with Colin Kaepernick, David Ortiz, Chris Webber and others (Beacon Press). >> In “The Marginalized Majority,” journalist Onnesha Roychoudhuri reflects on how marginalized people hold the power to alter the course of history (Melville House). >> Scholar Stephen Dillon looks at the criminalization of queer and feminist activists to scrutinize the carceral state in “Fugitive Life: The Queer Politics of the Prison State” (Duke University Press).

“New Poets of Native Nations” topples racist and essentialist assumptions about poetry written by Native American writers in an anthology filled with diverse styles and lyricism (Graywolf Press). >> Muslim-American poet Fatimah Asghar navigates intergenerational violence, vulnerability and love in her collection, “If They Come For Us” (Penguin Random House). >> In her debut poetry collection, “Don’t Let Them See Me Like This,” Jasmine Gibson unearths the brutality of capitalism, biopolitics and White supremacy and explores desire and the idea of political insurgency (Nightboat). >> Jerika Marchan’s “SWOLE” is a lyric response to environmental racism and the irreversible impact of Hurricane Katrina (Future Poem). >> “Love War Stories” is a collection of short stories about Puerto Rican women and girls and their understanding of love and its myths (The Feminist Press). >> Zinzi Clemmons’ novel, ”What We Lose,” loosely based on the author’s experience of caring for her dying mother, is a fragmented story of grief and diasporic identity (Penguin Random House).

Wickedly funny cultural critic Michael Arceneaux meditates on growing up Black and gay, his relationship to religion and the sanctity of Beyoncé in ”I Can’t Date Jesus” (Atria). >> In “Sick,” Iranian-American author Porochista Khakpour shares her struggle of living with late-stage Lyme disease, challenging our assumptions about chronic illness and recovery (Harper Perennial). >> Historian Nell Irvin Painter pivots from academia to art in her memoir, “Old in Art School“ (Counterpoint Press). >> “Lorna Simpson Collages” uplifts the renowned artist’s work celebrating Black hair with 160 illustrations that cull images from vintage textbooks and advertisements (Chronicle Books). >> “Whitewalling” looks back on three incidents of racism and resistance in the art world to illuminate how power and Whiteness factor into the politics of museums and galleries (Badlands Unlimited).