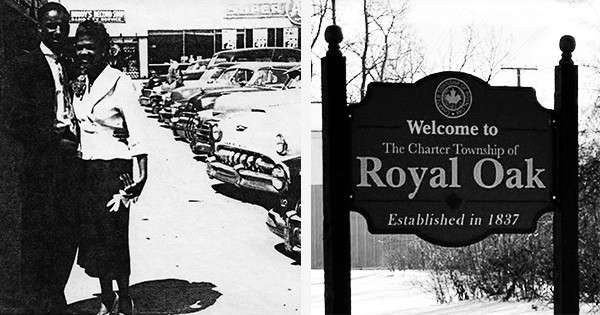 Nationwide — If you live in one of 10 contiguous South Oakland County, Michigan suburbs (one of the wealthiest counties in the United States), you are living on the stolen land and looted lives of a historically Black community called Royal Oak Township, dating back to 1819 and before Michigan’s 1837 statehood. White security and wealth were built simultaneous and interdependently through the destruction and annexation of historically Black Royal Oak Charter Township, now a .55 square mile remnant of an area that once spanned 36 square miles.

With a multi-racial, intergenerational effort, they are currently engaged in work to create a campaign, Truth Toward Reconciliation: “The Vision, Journey, and Voices of Royal Oak Charter Township,” in southern Oakland County whose history is a microcosm of the destruction of black communities, i.e., Detroit’s Black Bottom, Tulsa’s Black Wall Street, and Rosewood’s Massacre.

A GoFundMe page has been established for those who wish to support this campaign which includes the production of a documentary video, e-magazine, social media, conversations, inter-generational dialogues, truth-telling stories, and voices of those who have lived or currently live in this 36 square mile township and surrounding area.

Spearheaded by Friends of Royal Oak Township, Inc., a volunteer-driven, 501(c)(3), this effort was launched in late 2019. They want to raise a minimum of $75,000 to continue advancing our year one planning for the initial stage of this historic two-year initiative. Their effort will join a mere handful of other truth and reconciliation movements nationwide inclusive of the City of Chicago’s Police Reparations and Suburban Chicago Evanston, and the North Carolina cities of Asheville and Greensboro.

The Ferguson rebellion has opened many American eyes and some hearts in a way unseen since the Freedom movement of the 1960s. During his tenure, the so-called “leader of the free world,” Donald J. Trump, made “white rage” as real as in any other time in America’s history.

Historically, and particularly since the Jim Crow era, growing numbers of white people continue to support racist policies. The events of January 6th, in the bastion of American democracy, the plight of democracy was exacerbated beyond any sense of rational, ethical, or moral humanity.

Against the backdrop of the documented 4,400 Black lynchings in America between Reconstruction and World War II, the August 28, 1955, torturous murder of 14-year-old Emmitt Till, and the more recent murders of George Floyd, Breanna Taylor (among a list too lengthy to recount), we were once again awakened in our homes, throughout our neighborhoods, across this country, and around the world to publicly proclaim that Black Lives Matter!

Some non-Black Truth Toward Reconciliation initiative colleagues ask, “What does it look like when white people proclaim that they need to speak out against racism, challenge themselves and their neighbors to really, really tell the truth of their history?” By doing so, it means they can begin to heal, reconcile, and repair the pain, the harm, the violence, both physical and spiritual, that is fundamentally related to a history built upon the genocide of indigenous people and the enslavement of Africans. In resistance to hundreds of years built upon racial capitalism, people of African ancestry have been the conscience of this nation.

Today, the Friends of Royal Oak Township, Inc. believe that we will continue to travel the path to heal and leave behind this racist history. While they know that this is a national and international struggle, they believe it is through local work that we can change ourselves and the world.

“Only through truth can we get to healing and reconciliation: First truth, then healing,” the founders say.

Visit www.forot.org to learn more about the work of Friends of Royal Oak Township, Inc. (FOROT) over its 10-year history.