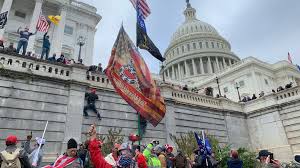 The Senate kicked off hearings on Wednesday to figure out why a group of Donald Trump supporters attacked the Capitol on Jan. 6. But from Wednesday’s hearing, it seems that only one side of the aisle was really interested in looking for the truth.

Sen. Ron Johnson (R-Wis.) was not interested in discovering the truth behind the attack. He read from a right-wing blog and continued to spout conspiracy theories about the attack.

“Not one appeared angry or incited to riot,” said Johnson reading from an article by J. Michael Waller in “The Federalist.” “Many of the marchers were families with small children; many were elderly, overweight, or just plain tired or frail — traits not typically attributed to the riot-prone.”

Johnson also claimed many of the crowd carried pro-police signs and flags. But the crowd also beat a police officer to death. Thomas Webster, a former New York Police Department officer, was recently arrested for his crimes during the attack. He was captured on film trying to gouge a Capitol police officer’s eye out.

Salon columnist Amanda Marcotte highlighted Johnson’s lies and claimed the violence could have been much worse.

“Law enforcement seized Molotov cocktails, bear spray, guns, and knives from insurrectionists. Others improvised weapons, often using flagpoles or fire hydrants, or seized weapons from the Capitol police officers they then attacked,” said Marcotte. “The likely reason it wasn’t worse is D.C.’s strict gun laws prevented many would-be rioters from making it to the Capitol in the first place and discouraged others from carrying guns for fear of being stopped by police.”

However, there was a lot of finger-pointing and buck-passing from other agencies during the hearing. For example, former Capitol Police Chief Steve Sund continued to shift blame away from his agency. He claimed that he never received the FBI warning. But this is the second time his story has changed. In the past, he claimed he didn’t receive any warning of an impending attack. Now, he’s saying the warning was never passed on.

The hearing also featured testimony from police officers who fought on the front lines with well-armed and determined Trump supporters. Capt. Carneysha Mendoza described how she fought for hours trying to defend the Capitol and suffered serious injuries. Her arm was almost broken and she still has burns from CS gas used by the attackers.

“I have received chemical burns to my face that still have not healed to this day,” she said. “ … according to my Fitbit I was in the exercise zone for four hours and nine minutes, and many officers were in the fight before I arrived.”

However, Johnson’s conspiracy theories are supported by far-right media, which is determined to tell the opposite of the truth. Fox News commentator Tucker Carlson is using his primetime show to gaslight the public about the attack.

“There is no evidence that white supremacists are responsible for what happened on January 6, that’s a lie,” said Carlson on his show.

However, the attackers bore signs and symbols that showed they were white nationalists and supporters of the anti-Semitic QAnon conspiracy theory. In an ABC interview, officer Harry Dunn also described battling Trump supporters for hours and being called the n-word multiple times.

But Carlson said that his show’s staff searched and couldn’t find any evidence of QAnon online.

“So we checked. We spent all day trying to locate the famous QAnon, which in the end we learned is not even a website. If it’s out there, we could not find it,” said Carlson.