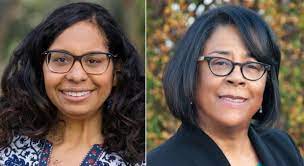 No matter the winner, the person who replaces Karen Bass in Congress will be of African-American descent.

Bass resigned from Congress to run for Los Angeles mayor. She is in a November runoff with real estate developer Rick Caruso.

The race for the 37th Congressional district, which will be voted on in a November primary, features State Sen. Sydney Kamlager and former Los Angeles City Council Member Jan Perry. Kamlager is biracial, while Perry is Black. Both women are Democrats. They finished in the top two positions of the primary and advanced to the November ballot. Kamlager received 42,585 votes, while Perry received 17,963 votes, according to Ballotpedia. Since neither candidate received 50% of the vote, they will go to a runoff in November.

Kamlager got her start in politics on the Los Angeles Community College Board. She was elected to the State Assembly in 2018 and advanced to the Senate in 2021.

Kamlager has drawn impressive endorsements such as Bass, LA County Supervisor Holly Mitchell, Sen. Alex Padilla, Rep. Adam Schiff, Gov. Gavin Newsom and Sec. of State Shirley Weber. She has also been endorsed by organizations such as the L.A. County Federation of Labor and the California Federation of Teachers.

She was recently endorsed by The Los Angeles Times, which said she had “solid policy skills and a sense of political finesse, she’s prepared to represent her district well.”

Perry served for 12 years on the LA City Council. She was involved in major projects such as LA Live, the Cathedral of Our Lady of the Angels, and the new Police Administrative Building.

Some of the major political figures who have endorsed Perry include Rep. Maxine Waters and former Los Angeles City Council Member Bernard Parks.

In a press release, Perry urged California politicians to “step out of their taxpayer-financed SUVs” and do more for Californians struggling with rising gas costs.

“A temporary suspension of gas tax might not seem like a big deal to a politician tooling around town in a taxpayer paid for town car, but a temporary 50-cent reduction in the price of gas will tip the scales for working families,” said Perry.

Perry said she’s familiar with the district and is well prepared to represent its residents at the federal level.

“The newly redistricted congressional district has much of my former council district in it. That is good news for my candidacy. I will fight for campaign reform, so that it doesn’t take millions to get your name on the ballot and millions more to run a competitive campaign,” said Perry on her campaign website.