Home > National > Trump Stokes Violence As He Pretends to Be President, Claims Election Was Stolen

Trump Stokes Violence As He Pretends to Be President, Claims Election Was Stolen 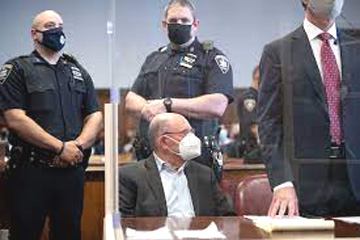 The United States might be on the verge of political violence in the near future. And much of that is going to be caused by the actions of former President Donald Trump. After he lost the 2020 election to the eventual winner Democrat Joe Biden, Trump has refused to retire quietly. However, it’s much worse and even potentially dangerous than that. Trump is not only refusing to retire, he’s also acting like he still president and stoking potential violence.

On the letterhead of his stationary, he now refers to himself as the 45th president of the United States. But he doesn’t refer to them as “former president.” In a speech at his Florida resort, Trump appeared in front of a scene made to look like it was shot at the White House.

In addition, many Trump supporters still think he’s president. In interviews with CNN’s Donie O’Sullivan, who covers the QAnon conspiracy movement, several Trump supporters say that they expect him to be reinstated in the White House very soon. However, many have also said they’re ready to engage in civil war if that doesn’t happen.

Georgia Rep. Marjorie Taylor Greene, who has promoted QAnon, has referred to Trump as “my president” in recent rallies.

Trump has not helped the situation with his constant lying about the result of the last election. Trump believes that the election was stolen from him and has frequently repeated this “Big Lie” in interviews. The belief that the election was stolen from Trump led to the Jan. 6 Capitol attack. During the attack, a murderous Trump-inspired mob threatened to kill legislators. The violence resulted in seven deaths and caused about $30 million of damage. More than 500 people have been arrested and charged for that violence.

However, Trump’s lies were on full display at the recent Conservative Political Action Conference in Dallas, Texas. Trump was given prime speaking time and during his speech, he continued to lie about the election. The speech was so filled with lies that FOX News Channel ran a disclaimer as the speech aired. Trump was later named the top GOP pick for the 2024 presidential nomination.

“This election was rigged. And the Supreme Court and other courts didn’t want to do anything about it,” said Trump. The Trump campaign’s legal team lost about 60 election fraud lawsuits.

However, some people in the media, which gave Trump almost $1 billion worth of free coverage in 2016, are now pushing back against his lies and excesses.

CNN’s Jim Acosta criticized the president for his constant lying and pretending he was still in power.

“Now the same man who gripped the Stars and Stripes won’t let go of something else: the idea that he’s still president,” said Acosta. He added, the fake White House scene “looks like some kind of POTUS Potemkin village with Trump as pretender in chief.”

However, some national security experts are preparing for potential violence. Malcolm Nance, a retired intelligence officer and Navy veteran, accurately predicted future far-right violence back in Fall 2020. This was before Trump’s lost the election and the Jan. 6 insurrection. He now says the situation is even worse.

“I have been monitoring their communications since last December. These people are already, many of them, committed to the concept of overthrowing American democracy and inciting civil war,” said Nance in an MSNBC interview. “All you have to do is watch AR-15 ammunition prices, which went — skyrocketed last year from 21 cents a bullet to almost $1.25 a bullet now. Many of these people think that there is an apocalypse coming.”