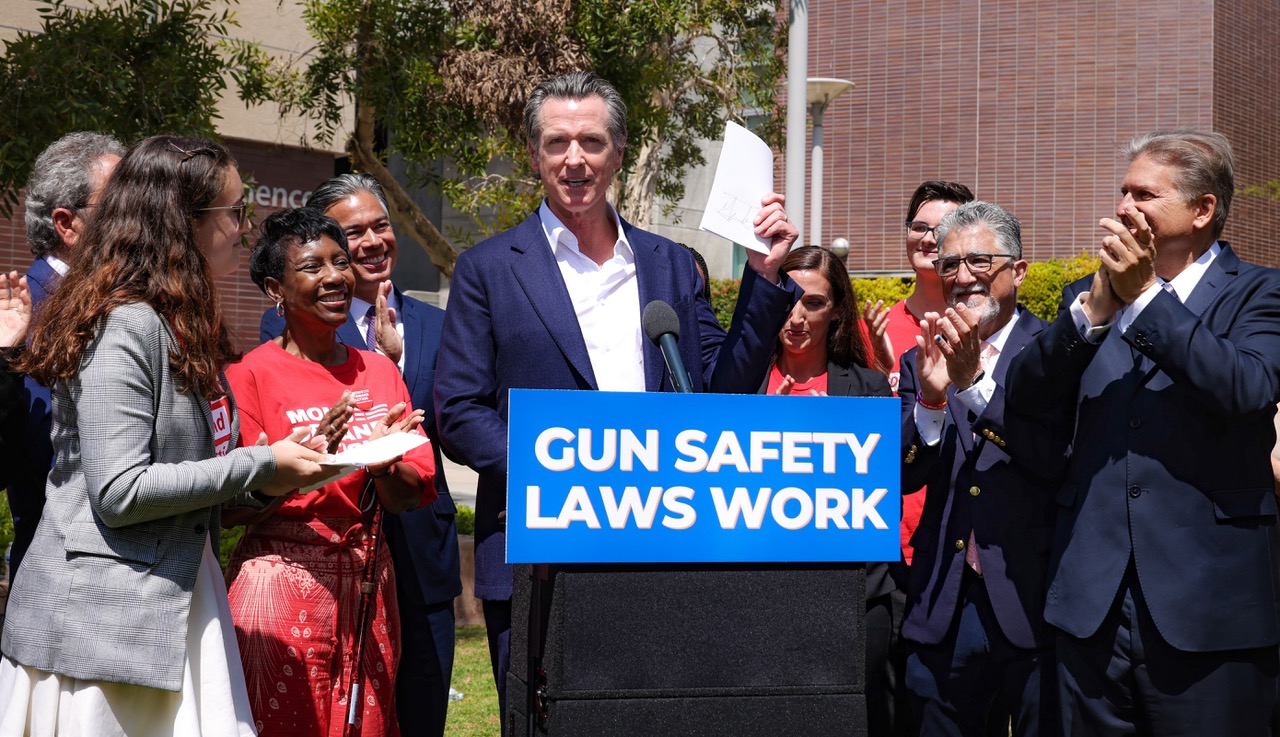 “California has the toughest gun safety laws in the nation, but none of us can afford to be complacent in tackling the gun violence crisis ravaging our country,” Newsom said. “These new measures will help keep children safe at school, keep guns out of the hands of dangerous people and responsibly regulate the sale of firearms in our communities. California will continue to lead on lifesaving polices that provide a model for action by other states and the nation.”

Here is a breakdown of the bills which are intended to improve school safety, restrict gun possession by people convicted of child abuse or elder abuse, and better regulate the sale of firearms.

Assembly Bill (AB) 228, authored by Assemblymember Freddie Rodriguez (D-Chino), will require the Department of Justice to inspect gun dealers at least every three years unless the jurisdiction already has an inspection program in place.

“Following the tragic events in Uvalde, Texas, last week, it is vital that our country ensures these firearms stop ending up in the hands of criminals. AB 228 will require firearm dealers to be inspected regularly, ensuring that dealers follow the laws intended to keep our communities safe,” Rodriguez said in June.

AB 1842, also authored by Rodriguez, caps firearm cancelation fees to 5% of the purchase price for licensed firearms dealers, except for special order firearms.

“Californians who make the safe and responsible decision not to complete their firearm purchase should not be penalized, especially if they never even possessed the firearm,” said Rodriguez. “AB 1842 would limit these return-related fees, so buyers are not incentivized to complete their firearm purchase, rather than paying up to half the cost to cancel such. I am dedicated to helping end gun violence by tightening up laws surrounding the purchasing, or cancellation of purchasing, firearms.”

“Ghost guns can bypass common sense policies created to protect our communities from senseless gun violence. AB 311 will address growing concerns over the availability of these firearms by prohibiting their sale at guns shows,” Ward tweeted last year.

“You cannot sell or manufacture illegal weapons of war in CA,” Newsom tweeted. “And if you do, there are now 40 million people that can collect $10,000 from you for engaging in that illegal activity.”

“Gun Violence is a massive weight on our collective conscience. When children begin to feel unsafe, anxiety, & worry about this threat while in school, we know we have a lot of work to do,” Bennet tweeted.

Assemblymember Buffy Wicks (D-Oakland) is behind AB 2156. The bill that expands the limits on firearm manufacturing without a state license to slow the spread of “ghost guns.”

“This will bring much-needed oversight & regulation to the market for ‘ghost guns.’” Wicks tweeted.

AB 2239, authored by Assemblymember Brian Maienschein (D-San Diego), prohibits individuals who have been convicted of elder or child abuse from possessing a firearm for 10 years.

“This measure will help keep guns away from dangerous individuals, specifically those convicted of child endangerment & elder abuse,” Maienschein tweeted.

This will also require some collaboration with law enforcement regarding “any threat or perceived threat.”

“The gun violence we experience in this country is unacceptable and absurd,” Min tweeted.

SB 1327, authored by Senator Bob Hertzberg (D-San Fernando Valley), allows Californians to sue those making, selling, transporting or distributing illegal assault weapons and ghost guns – guns made at home to avoid tracing – for damages of at least $10,000 per weapon involved. The same damages are also applicable against gun dealers who illegally sell firearms to those under 21 years of age. Some say the legislation is California’s answer to Texas’ anti-abortion bill which places $10,000 bounties on doctors, providers and others involved in providing abortion care.

“I am proud to be working with Governor Newsom and his Administration to bring accountability to gun manufacturers and others who are flooding our streets with dangerous and deadly weapons,” said Hertzberg.

“Our message to the criminals spreading illegal weapons in California is simple: you have no safe harbor here in the Golden State.” Newsom said.