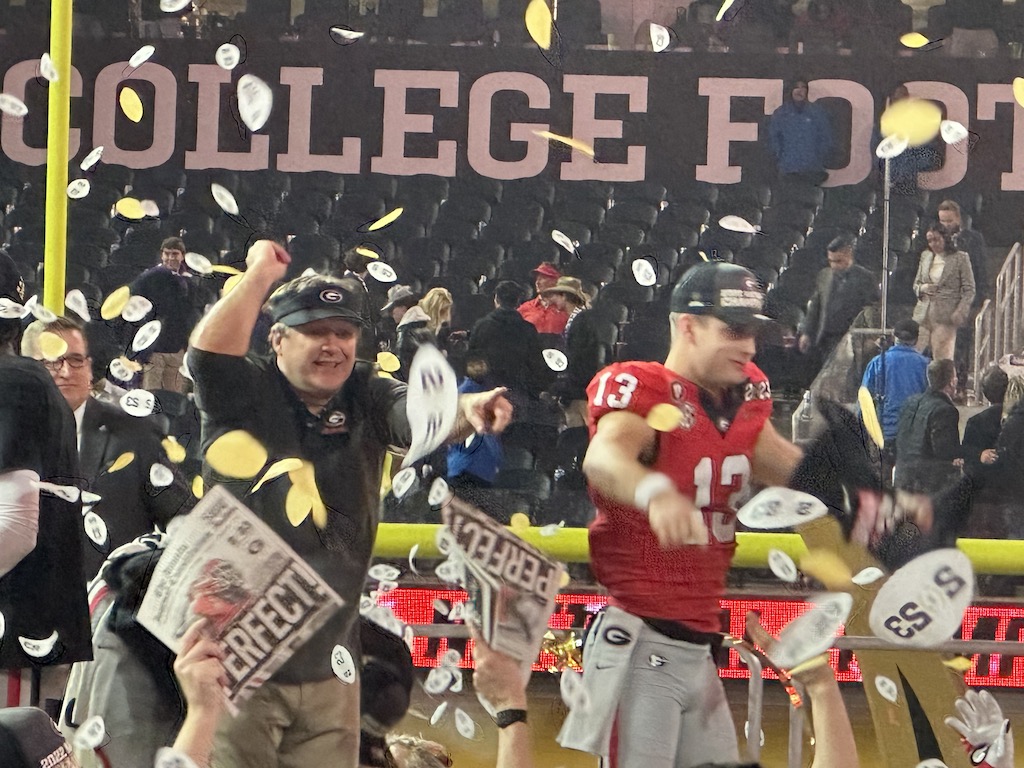 Inglewood, CA — The final showcase for the College Football Playoff National Championship concluded on Monday night at SoFi Stadium. It was the No.1 University of Georgia Bulldogs versus the No. 3 Texas Christian University Horned Frogs.

As defending national champions, coach Kirby Smart got the undefeated Bulldogs back again by barely defeating Ohio State in the semifinals at the Peach Bowl, 42 – 41.

Coach Sonny Dykes did a fantastic job getting the previously unranked team to the national championship in his first year at TCU. With a 13-1 record, they entered the contest with an impressive semifinal Fiesta Bowl win by defeating No. 2  Michigan, 51-45. The team’s performance led by Heisman Trophy finalist, quarterback Max Duggan. He was ready for the showdown against another Heisman finalist in Georgia’s Stetson Bennett. The Horned Frog fans believed that like David defeat Goliath, so TCU could defeat the Georgia. The stadium was electric with the high-volume noise levels of 72,628 fans. Both teams represented very well  with Georgia in red, and TCU in purple throughout the stadium.

Therefore with great anticipation the game had started with TCU receiving the ball first as Georgia elected to kick the ball after winning the coin toss. Georgia’s ferocious defense set the tempo for the entire game against the high-powered offense of TCU. In the first quarter TCU scored their one and only touchdown; while Georgia would set a national championship record with 17 points in the first quarter. This battle was over after the first quarter as Georgia would score often in this runaway 65-7 victory.  Max Duggan passed for 152 yards on 14/22 attempts with two interceptions by Georgia’s Javon Bullard,DB.

As for Stetson Bennett, he saved his best for last  to showcase his talent for the NFL draft. He had 304 yards passing with four touchdowns, and 39 yards rushing with two touchdowns. When asked about his performance, he said, “Well, I mean, we had confidence in the plan. ..But it’s the last one. I mean, it was the last one in this jersey. It’s for the national championship. It was against Max, who is a great quarterback and I know from New York. But I mean if you can’t pull out your best in a game like this or at least your best effort and best preparation, then maybe this isn’t  for  you.”

Coach Smart took him out in fourth quarter to the applauding Bulldog fans. The 25-year old Bennett would ride off into the sunset with two back-to-back national championships making history for the Bulldogs.
Coach Smart said, “And when you have a quarterback that can do the protections and check things and know what the defense is doing, yet still beat you with your feet, you’ve got a high-level quart back. And people have slept on Stetson Bennett for too long. He needs an opportunity to play for a long time at the next level.”
In conclusion, Coach Dykes said, “Well, tough one tonight…we certainly didn’t play our best. You’ve got to give Georgia a ton of credit. They did a tremendous job of getting their team ready to play.”

Congratulations to Georgia and TCU for and fantastic football season.