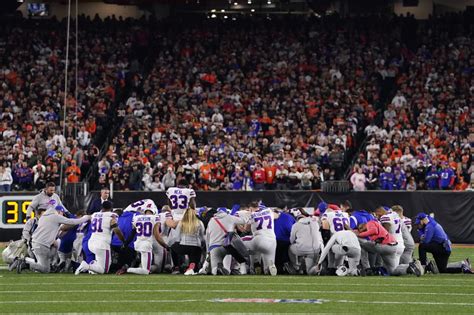 By Stephanie Holland | The Root

“On behalf of our family, we want to express our sincere gratitude for the love and support shown to Damar during this challenging time. We are deeply moved by the prayers, kind words, and donations from fans around the country,” the statement read.

We also want to acknowledge the dedicated first responders and healthcare professionals at the University of Cincinnati Medical Center who have provided exceptional care to Damar. We feel so blessed to be a part of the Buffalo Bills organization and to have their support. We also want to thank Coach Taylor and the Bengals for everything they’ve done.

Your generosity and compassion mean the world to us. Please keep Damar in your prayers. We will release updates as soon as we have them.

Thank you, The Hamlin Family”

Per NBC News New York, the medical center currently doesn’t have a briefing scheduled for Tuesday.

The sports world was shocked during the Monday Night Football game between the Buffalo Bills and Cincinnati Bengals when Bills safety Damar Hamlin collapsed on the field after taking a hard hit. Players and viewers were stunned to then see medical teams and paramedics administer CPR and AED on the field. Thankfully, they were able to revive him and he was taken by ambulance to the University of Cincinnati Medical Center. After temporarily suspending the game for some time, the NFL officially postponed it around 10 p.m. ET.

Hours later, at 1:48 a.m. ET, the Bills offered an update on Twitter, writing, “Damar Hamlin suffered a cardiac arrest following a hit in our game versus the Bengals. His heartbeat was restored on the field and he was transferred to the UC Medical Center for further testing and treatment. He is currently sedated and listed in critical condition.”

In the immediate aftermath of the incident, it was clear ESPN’s broadcast team were shaken by what they’d just seen. Announcers Joe Buck, Troy Aikman and Lisa Salters tried to keep viewers updated on what was happening with Bengals and Bills players at Paycor Stadium in Cincinnati, while the Monday Night Countdown team in New York attempted to bring analysis to the moment. Despite their admirable professionalism, journalists Suzy Kolber and Adam Schefter, along with former NFL player Booger McFarland, are human like the rest of us and were obviously emotional about what they’d just witnessed. Later in the evening, another former player and ESPN analyst, Ryan Clark, appeared on SportsCenter with Scott Van Pelt and received praise for how he reminded everyone about the ugly cost of the game.

“So many times, in this game and in our job as well, we use the clichés, ‘I’m ready to die for this, I’m willing to give my life for this, it’s time to go to war.’’ And I think sometimes we use those things so much we forget that part of living this dream is putting your life at risk,” Clark said. “And tonight we got to see a side of football that is extremely ugly—a side of football that no one ever wants to see or never wants to admit exists. When you see both teams on the field crying in that way, your first thought is Damar Hamlin. Your second thought is his family. And this isn’t about a football player, this is about a human. This is about a brother, this is about a son, this is about a friend. This is about someone who is loved by so many that you have to watch go through this.”

The former Pittsburgh Steelers safety then related his own experience, speaking about a time during a game in October 2007 when Clark, who suffers from a sickle cell trait, became extremely ill and ultimately had to have his spleen and gallbladder removed.

“I’ve dealt with this before and I watched my teammates—for days—come to my hospital bed and just cry. I had them call me and tell me they didn’t think I was going to make it and now this team [the Buffalo Bills] has to deal with that and they have no answers,” Clark said. “And so the next time that we get upset that our favorite fantasy player—or we are upset that the guy on our team doesn’t make the play and we’re saying he’s worthless—we should remember that these men are putting their lives on the line to live their dream. And tonight, Damar Hamlin’s dream became a nightmare not only for himself but his family and his entire team.”

As the game was paused and everyone awaited word on Hamlin’s condition, prayers were sent throughout the sports world from players and teams. Even Cleveland Cavaliers star Donovan Mitchell, who just had the game of his life—scoring 71 points against the Chicago Bulls on Monday night—took time during his postgame press conference to offer words of support for Hamlin.

Of course, it wasn’t all good news, as Fox Sports personality Skip Bayless–who is a fountain of bad takes–decided that as we all waited to find out whether Damar was dead or alive, needed to tweet about the playoff implications of rescheduling the game, writing, “No doubt the NFL is considering postponing the rest of this game – but how? This late in the season, a game of this magnitude is crucial to the regular-season outcome … which suddenly seems so irrelevant.”

Obviously, this did not go over well, with The Roots drummer/filmmaker Questlove replying, “He is a human being man. Damn.”

Thank goodness, some humanity could be found on social media. With nothing to do but pray and wait, the GoFundMe for Hamlin’s toy drive, The Chasing M’s, began to make the rounds. The charity had an initial goal of $2,500 and as of Tuesday morning it currently stands at $3.5 million.

When we watch sports, it’s easy to get lost in the hoopla and adrenaline of the game, forgetting that these are real people with families and lives outside of the field. Players go down with leg and arm injuries, we see them wave as they leave the game, and a few minutes later the action restarts. Watching Damar Hamlin collapse was a scary reminder that football is a life-threatening sport that can come with terrifying consequences. And as much as the NFL preaches about player safety, the league is a moving train that doesn’t stop for anyone. As it heads into the postseason, it’s important that we as fans don’t forget about Damar Hamlin, his family or the sad cost of entertaining millions.