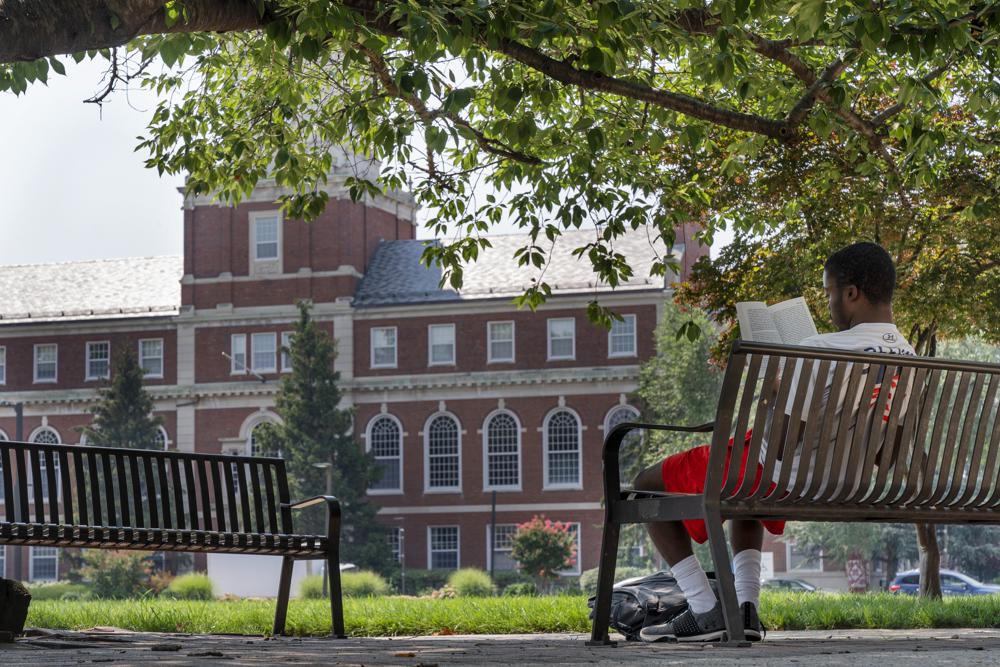 WASHINGTON (AP) — For millions of Americans, President Joe Biden’s student loan cancellation offers a life-changing chance to escape the burden of debt. But for future generations of students, it doesn’t fix the underlying reason for the crisis: the rising cost of college.

The specter of heavy debt will still loom over current high school seniors — and everyone after them — since the debt cancellation only applies to those who took out federal student loans before July 1.

Among the main causes is rising college tuition: Today’s four-year universities charge an average of nearly $17,000 a year in tuition and mandatory fees, more than double the inflation-adjusted average from 30 years ago, according to federal data.

Biden’s failure to tackle the broader problem drew reproach from Republicans along with some of his fellow Democrats.

Sen. Catherine Cortez Masto, D-Nev., said the loan cancellation “doesn’t address the root problems that make college unaffordable.” Instead she called for expanded Pell Grants reserved for low-income students, and targeted forgiveness for borrowers in need. Other critics included Sen. Michael Bennet, D-Colo., who said the forgiveness should have been joined by action to address the “absurd” cost of college.

“We cannot continue to trap another generation of Americans in this cruel cycle,” Bennet said.

The issue is top of mind for 17-year-old Ariel Wolfe. The high-school senior in Borden, Indiana, has older siblings who qualify for forgiveness, but she won’t. Wolfe has saved about $2,000 for college and hopes to avoid loans, but she doesn’t know if she can. She wishes Biden’s debt plan, or something like it, would be available to her and her peers, saying it would be “an incentive to have more people go to college.”

In Olathe, Kansas, high-school senior Natalie Ren said it’s frustrating that today’s college students will get relief but her class, less than a year away from college, won’t.

“So to me, it’s just like, Well, why are they getting the $10,000 taken off of their student loan debt?” said Ren, 17. “Meanwhile, we’re still going to have to take on that full responsibility.”

There’s no doubt that Biden’s debt forgiveness plan has a big upside for many Americans, if it survives the court challenges that are likely coming. More than 20 million will be eligible to get their federal student debt erased entirely, and 23 million more could get it reduced, the administration said. The plan cancels $10,000 per borrower and another $10,000 for Pell Grant recipients, for those who earn less than $125,000 a year or $250,000 per household.

Biden also extended a pandemic-era pause on federal student loan payments for what he called the “final time.” Payments are now expected to restart in January.

But without broader action, the nation’s federal student loan debt will return to today’s levels — $1.6 trillion — within five years of the cancellation, according to the Committee for a Responsible Federal Budget, a nonprofit that advocates for lower deficits.

“This doesn’t fundamentally solve the student debt problem,” said Marc Goldwein, the budget group’s senior policy director. “It will be a one-time clean slate that wipes a bunch of people off the rolls. But they’re just going to be replaced by new borrowers.”

It also creates an expectation that future presidents may forgive some share of student debt, which could make borrowers feel safer taking on debt and in turn encourage colleges to raise prices further, Goldwein said.

“This has the potential to worsen college affordability,” he said.

Even higher-education leaders said Biden’s plan should be seen only as a first step toward college affordability. The American Council on Education, a group that represents college and university leaders, called on Congress to simplify repayment options and limit student loan interest, among other changes.

“To avoid forcing current and future students into the same debt morass, we must act in a comprehensive manner to modernize the federal student loan program,” said Ted Mitchell, the group’s president.

Mitchell pointed to state cuts in higher education as a “big reason” for tuition increases at public universities and more student debt.

Anticipating criticism, Biden’s plan came with a separate proposal that aims to lower federal student debt payments in the future. The proposed regulation would create a new repayment plan with monthly payments capped at no more than 5% of a borrower’s discretionary income, down from 10% in similar existing plans.

It would also forgive any remaining balance after 10 years — down from 20 years in existing options — and it would raise the floor for repayments, meaning no one earning less than 225% of the federal poverty level would need to make monthly payments.

The idea was well received even by some critics, but taken as a whole, many saw the moment as a missed chance to pursue broader changes.

Major updates to the federal student debt system would require approval from Congress, but there has been bipartisan support for an overhaul. There are disagreements about the details, but lawmakers from both parties have shown support for expanded Pell Grants, simplified loan repayment options and a system to hold colleges accountable when their students get stuck with debt they can’t afford.

Instead of canceling debt, critics say the Biden administration should have brokered a deal to overhaul the federal loan system through legislation.

“It’s a real disappointment that we didn’t see that happen, and that instead we had this effort which to me is much more of a political solution than a policy one,” said Beth Akers, a senior fellow at the American Enterprise Institute, a conservative think tank.

Others question whether a sharply divided Congress would be able to reach an accord even on student debt. Biden previously pushed hard for free community college, which many Democrats see as an answer to rising debt, but he was ultimately unable to get unified support even from his own party.

After Biden’s free community college proposal was cut from a spending bill last year, he vowed to make it happen “in the next several years,” but the effort has yet to be revived.

Even without a federal program, a growing number of cities and states have experimented with free college programs of their own in recent years.

Still the momentum around student debt has sparked hope that broader change is possible. Responding to Biden’s plan, Democratic Rep. Bobby Scott of Virginia, chair of the House education and labor committee, called on Congress to take the next step. He said it will take “bold action” to make sure every student gets an education that leads to a good career.