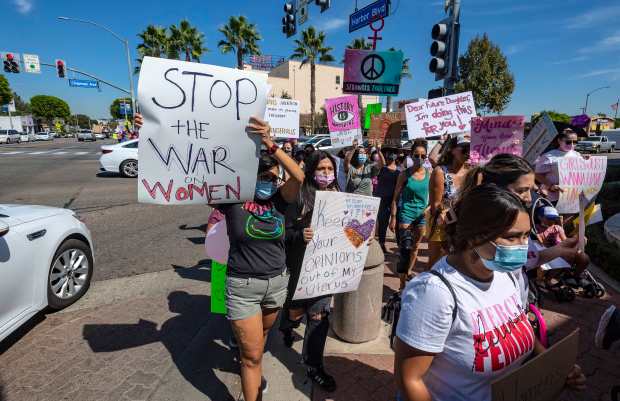 Thousands of women from across the nation gathered on Saturday to protest in favor of reproductive rights. There were several marches across Southern California, including Riverside, Los Angeles and Redlands.

In Riverside, protesters marched in downtown and held speeches at Riverside City Hall. Several protesters held placards that read “Keep your rosaries off my ovaries” and “My body, my choice.” The first women’s marched took place in 2017 and was motivated by the election of President Donald Trump.

However, not all of the marchers were women. Adam Lerman, an organizer with By Any Means Necessary, also marched alongside women in downtown Los Angeles.

Lerman said we needed a national march to convince the Biden administration to protect reproductive rights.

“This is great,” he said. “But we need a million people out here. And then we need to march in Washington.”

The nationwide protests were sparked by the recent Texas law that restricts abortion to five weeks. In addition, the Texas law also places a $10,000 bounty on anyone who assists a woman who has an abortion.

The Texas law also bans abortion even in the case of incest and rape. Texas Gov. Greg Abbott has received criticism for this law. For example, when asked how women who are raped should handle pregnancies, Abbott replied that he planned to eliminate rape.

These recent laws are part of a nationwide trend. And the Supreme Court is expected to reconsider Roe vs. Wade this week.

“The justices will hear arguments Dec. 1 in Mississippi’s bid to enforce a ban on most abortions after 15 weeks of pregnancy. Lower courts blocked the law because it is inconsistent with high court rulings that allow states to regulate but not prohibit abortion before viability, the point around 24 weeks of pregnancy when a fetus can survive outside the womb,” according to the Associated Press. “Mississippi is among 12 states with so-called trigger laws that would take effect if Roe is overturned and ban abortion entirely.”

Pro-choice forces are concerned about these recent events because the Supreme Court now has a 6 to 3 conservative majority. And the most recent addition to the Supreme Court, Amy Coney Barrett, is pro-life. She also belongs to a far-right Christian sect that refers to women as “handmaidens.”

Last week, several legislators shared their abortion stories to show that abortion is a frequently used medical procedure. The testimonies were given during a congressional hearing.

Rep. Cori Bush (D-Mo.) said she terminated her pregnancy when she was a teenager after she was raped.

“So, to all the Black women and girls who have had abortions and will have abortions: We have nothing to be ashamed of. We live in a society that has failed to legislate love and justice for us, so we deserve better, we demand better, we are worthy of better,” said Bush.

Rep. Pramila Jayapal (D-Wash.) also decided to terminate her pregnancy after becoming pregnant while on birth control. Her doctor said that it would be a high-risk pregnancy and her first child was born prematurely.

“For me, terminating my pregnancy was not an easy choice, the most difficult I’ve made in my life. But it was my choice. And that is what must be preserved for every pregnant person,” said Jayapal.