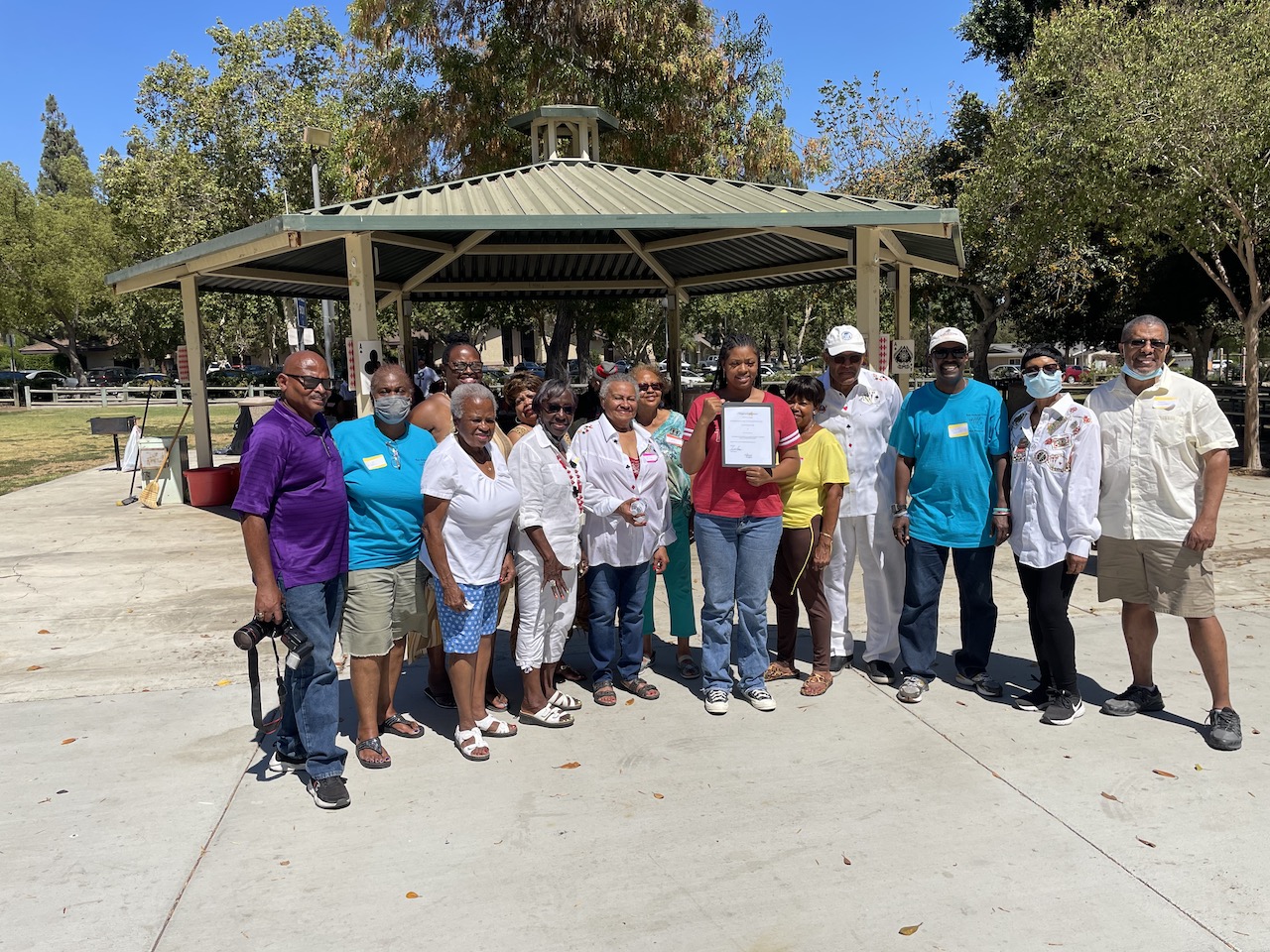 Los Angeles, CA — The San Gabriel Valley Bid Whist Club presented two scholarships at its first in person meeting since the beginning of the Covid 19 pandemic. The club usually meet every fourth Saturday of each month in members’ homes for their regular card parties.  They also sponsor a bid whist scholarship dinner and tournament.  The club has not held a card party since February 2020 and a dinner and tournament since 2019.

The club decided to host an outdoor picnic and honor 2 high school seniors from Charles Drew High School in Los Angeles. The members of the club presented $800 and a certificate to their two recipients. Ziya Roberts received early acceptance to USC’s Cognitive Science Program as a merit-based scholarship winner. Precious Oniha wasn’t able to attend the event.  She will be attending UCLA and majoring in biochemistry and nursing. Reginald Brookins, principal of Charles Drew High School attended to give encouragement to his students. Past scholarship recipients were presence to talk about the college experiences and thank the club for their support. Jules Jones, 2019 scholarship recipient, attended and informed the club that he graduated in May from USC with a Bachelor of Arts degree in Music Business.

He is a producer with a Grammy-nominated artist. His plans are to own a record company. Arisa Squire was the 2020 scholarship recipient.  She attended Cal Baptist University and then transferred to Concord University where she completed the accelerated program in nursing.  She received an Associate Degree in Nursing.  She is a Licensed Vocational Nurse (LVN).  Reginald Brookins Jr. was a 2021 scholarship recipient.  He is starting his second year at the University of California Irvine. He is majoring in biological science.  His goal is to be an anesthesiologist.  Zamora Grayson is also a 2021 scholarship recipient. She is attending Howard University in Washington D.C. She is majoring in nursing.  Even though the club was not able to have any card parties, they were still able to issue scholarships in 2020 and 2021 through the financial support received from members and friends

The card game of whist has been said to originate in Turkey and was brought to the United Stated during slavery. Blacks were not allowed to read or write, but slave owners believed that the game of whist would help them count the cotton barrels and produce, so they were allowed to play.  Richard and Wilma Nichols started the San Gabriel Valley Bid Whist to provide an opportunity for friends who want to socialize and play bid whist.  Nichols was inspired to start the club after attending several tournaments and parties of the Inland Empire Valley Bid Whist Club in San Bernardino headed by Sunny Williams.  Since that club was named Inland Empire Valley Bid Whist Club, Nichols thought the San Gabriel Valley area needed a bid whist club, thus the name San Gabriel Valley Bid Whist Club was selected.  The first scholarship dinner and tournament were held on Sunday, January 16, 1994, the day before the Northridge Earthquake at the Shilo Inn Suite in Diamond Bar.  The club has given over $30,000 to high school seniors.